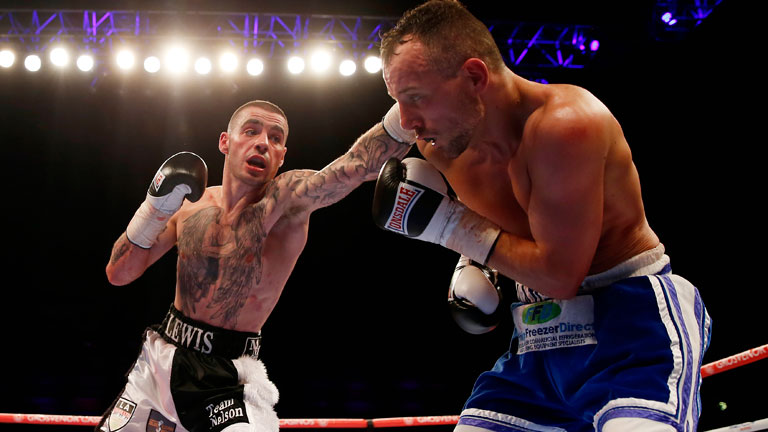 LEWIS RITSON is a former national amateur finalist who left his family behind in the North East in April to train as a professional with the highly respected Billy Nelson in Glasgow, Scotland. Having only turned pro in April, lightweight Lewis is already 4-0 (1) and has his fifth contest on Saturday (September 19) in Dunston, near to where he grew up. He spoke to Boxing News about the story so far.

So how did you end up with Billy Nelson in Scotland?
I got invited to a sparring session with [Nelson’s middleweight] David Brophy, and Ricky Burns was meant to spar there the next day, but his lad got injured. I sparred him the next day, and they asked me back a week later to spar Ricky as he prepared for Ray Beltran. That was a couple of years ago now and Billy asked if he could train me. I’d watched Ricky on the telly and I knew he was super-fit but what surprised me the most was his punching power; I didn’t expect him to be as powerful as he was. I was 20, I sparred him again the other week and it was a lot better. Every few months I’d go up to Billy for a weekend so he could see how I was getting on. I only turned pro this year because I had an electrician apprenticeship to finish. I was still on amateur shows but I didn’t want to take the next step until I had a qualification under my belt.

Do you go up to Glasgow for months at a time?
I live here full-time now. It was quite a big decision but Billy is a top-class coach so him asking to train you is too big an opportunity to knock back. My girlfriend came with us, but `I had to leave my mum, dad, brother and four sisters. My fights have mostly been in the North East because I sell quite a lot of tickets there; I stay there for a few days then go back up to Scotland. Up there, there’s nothing to do but train and run. I work at the weekend as a security guard at Debenham’s but I still train after work. My girlfriend is a deputy manager at Aldi, so she got a straight transfer to the branch near here.

You lost the 2012 National Senior amateur final to Tamuka Mucha on a majority decision at 67kgs, which was welterweight back then. As a pro you have been hovering around lightweight. Why is that?
As an amateur I didn’t know the meaning of ‘running’. I never used to run, I could have been a lot fitter. Now I run and train every day the weight has dropped off. I’m 137 1/2lbs now, two days before my fight, and I’ll be 137lbs for the weigh-in, so it’s not a massive struggle to make 135. I had a few GB trials as an amateur and they always said the same: ‘Get down to the weight below and we’ll take you.’ But I did my own thing.

What have you and Billy been working on recently in the Fighting Scots gym?
Billy is a perfectionist, he wants you to be as fit as you can be, and have perfect technique. He’s a good coach, motivator and can read a fight very well. Recently, my footwork, we’ve been practising that for the last few months, trying to get it a bit quicker. It’s terrible right now [laughs], shocking!

Are you aiming to sign with a national promoter?
I know Willie Limond is starting Lock Stock Promotions and he’s asking me to join him, so I can be on the Scots shows as well. I could go on the Anthony Crolla undercard in Manchester [on November 21]. There are a lot of promoters sniffing about and I’d like to go to different regions.

Who are your idols and role models?
There’s a few really, like Marvin Hagler and Roberto Duran, fighters who were fit as a fiddle and like to have a fight; that’s sort of my style.