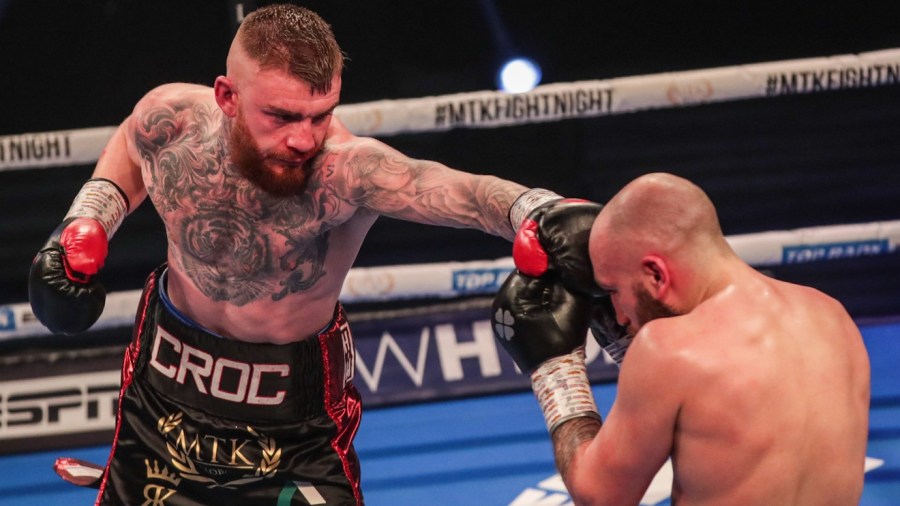 BELFAST welterweight Lewis Crocker topped MTK’s bill at the Bolton Whites Hotel and maintained his 100 per cent record. The wide margin of victory over Cologne’s Deniz Ilbay at the conclusion of 10 highly entertaining rounds, though, fails to fully tell the story and certainly doesn’t reflect the toughness of an opponent who just wouldn’t succumb.

After a close couple of early rounds, Lewis looked to have made the breakthrough late in the third when a crunching left to the body and a follow-up right sent Ilbay to one knee. At that point the odds on it being an early finish looked particularly favourable, but no one had seemingly told the man from the Rhine. He came storming back late in the fourth, to such a degree that Crocker was left holding after being tagged by a weighty right.

That was as good as it got for Deniz, but while he didn’t appear to have a reverse gear, what he did possess was guts aplenty and a seriously hard head off of which Crocker’s shots regularly bounced. It did look like Lewis might finally get that stoppage in the closing session as he threw everything but the kitchen sink at Ilbay, but it wasn’t to be.

Cards at the finish read 97-93, 97-92 and 99-90 for judges Mike Alexander, Terry O’Connor and Bob Williams respectively, all in favour of “The Croc”, but what a hard man Ilbay showed he is. Steve Gray refereed.

It had been a case of unlucky 13 for Kazakh lightweight Viktor Kotochigov in Dubai in October when, over 10 rounds, he slipped to a first career defeat at the hands of Rossington’s revitalised Maxi Hughes.

Maxi returns to this very same Bolton ring this Friday (March 19), when he takes on Belfast’s Paul Hyland Jnr, with the British title up for grabs. But for Kotochigov, the Irishman facing him across the ring came from south of the border. Unbeaten Naas southpaw Gary Cully and bout No. 14 proved even worse for him than the previous outing, with Cully needing just over a round-and-a-half to secure a technical count-out win.

Having backed Viktor up in the opener, Gary began the second in confident mood. A pair of uppercuts had already found the target before a peach of a left sent Kotochigov over flat on his back. Referee Williams dispensed with the count at 2-14, as the Kazakh stumbled while attempting to regain his feet. It had been set for 10.

In what was his first outing in over a year, and boxing in a British ring for the first time since early 2019, Morecambe’s Isaac Lowe was grateful of the opportunity to shake off a little ring rust in a scheduled six against late substitute Ed Harrison of Blackpool.

As expected, Lowe came out on top, with referee Alexander scoring him a 60-55 winner. However, he could’ve done without the diagonal cut to the left eyebrow, sustained when heads clashed in the third. Harrison was never overly troubled and, in the second half especially, gave it a real go.

Barnet’s Dujon had won all four previously, but Fail, whose twin brother Ben was another recent addition to the pros, proved a tougher proposition. Although Dujon made a better fist of it in the closer second half, he was unable to prevent left-hander Carl from taking the 58-56 decision of referee Williams.

Tattooed Reynolds, meanwhile, proceeded to take care of “Camden Caretaker” Chapman, emerging a shutout 60-54 winner for referee Williams after a one-sided affair. Relaxed throughout, and with his hands low at times, he shook Robbie – who at one point had to undergo a Paulie Malignaggi-style hair trim – with a huge left in the second.

THE VERDICT The second of three consecutive shows at this sizeable venue proves another success for MTK.