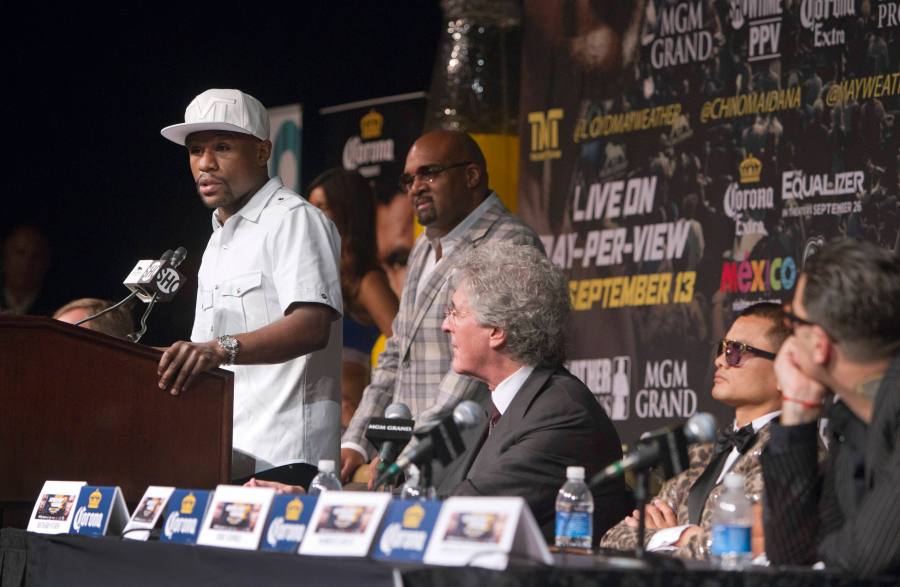 FLOYD MAYWEATHER is not getting the credit he deserves according to Mayweather Promotions chief-executive, Leonard Ellerbe, Showtime’s Stephen Espinoza, and Golden Boy’s Eric Gomez.

The 37-year-old has been a world class fighter for 16 years, and has racked up a tremendous 46-0 unbeaten record as a professional. Multiple world titles have been claimed in five weight classes, and in recent years, he has grossed more than any other athlete in sport. Even if massive underdog Marcos Maidana flattens Floyd in Saturday’s rematch, the American is a cert to make it into the Hall of Fame. The statistics should speak for themselves, but like anyone at the very pinnacle of their trade, Mayweather receives as much abuse as he does praise.

“He is the face of boxing,” said Ellerbe. “But he wears a target on his back. When you have been at the top for so many years, people are gunning for you, whatever you do, whatever you say.

“He has fought everyone in his era,” Mayweather’s long-time friend continued while adjusting his rose-tinted specs. “It’s not his fault he can’t go back in time and fight the legends of the past. He still gets criticised for his work in the ring.”

Meanwhile, Golden Boy’s Eric Gomez – an old friend, now employee, of Oscar De La Hoya – admitted he had wanted Mayweather to fail in the past, but spoke of his new-found admiration for the fighter.

“Floyd did not have to take this fight [with Maidana],” Gomez said. “But he did and that’s what makes him great. I’ve been rooting against him since he fought Oscar in 2007, and each year I’d think ‘We’ve got him this time’ but no. [I thought] He’s not going to beat Ricky Hatton. He’s not going to beat Canelo. But he’s beaten them all.

“One critic keeps him going and that’s Floyd himself. He wants to prove to himself that he’s the best.”

Ellerbe instructed the media to “stop hating” Mayweather, that the boxing world will miss him when he’s gone.

“There will be no other fighter like the guy sitting to my right,” he said. “We will miss this young man.”

Mayweather listened to the undiluted praise before expressing his gratitude.

“Me and my team we’re here again,” he said after dutifully thanking each of the people around him. “I don’t do all this just for me, I do it for my team.”