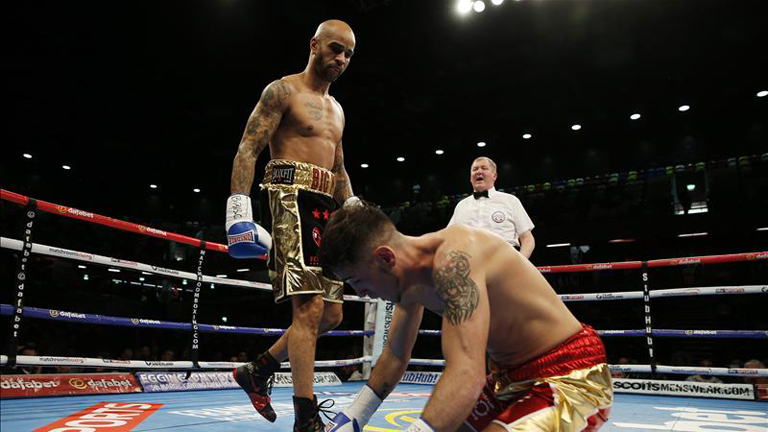 You’re from a famous fighting family, so what made you decide to become a professional footballer when you were younger, instead of pursuing a career in boxing?

I started playing football at eight years old. I grew to love it, and things just took off for me really. I signed for Crystal Palace [aged 15], and had to make a decision between football and boxing, and I chose football. I don’t regret the choice I made, because I had 18 good, solid years at the top level as a footballer.

Even when you were playing football professionally, did you always have a feeling that you’d get involved in boxing at some point in your life?

I wasn’t sure. I retired from football at 33 years old, so I didn’t really think that I’d get an opportunity to jump in the ring. But ‘The Grandad’s’ producing the goods at the moment!

How does being a professional boxer compare to being a pro footballer, and which do you prefer?

A comparison? Boxing is mentally a lot harder and more challenging than football. Things like making weight, and being on your own – you do a lot of things on your own, such as going for runs. But boxing is part of me – it’s in my blood and my genes. I’ve been an athlete all my life, so I can deal with being alone. Both sports have their highs and lows, so it’s very hard to say which one I prefer. I’m a boxer at the moment, but I scored some amazing goals as a footballer, and had some great times.

As well as boxing and football, are there any other sports you think you could become a professional at if you put your mind to it?

I think if you put your mind to most things, you can have a good outcome. I like a bit of golf, although I don’t get to play much these days. Let’s be honest, I’m 38 next year, so once I’m finished boxing, I think I’ll be looking to just spend more time with my kids.

Do you have any other talents outside of sport?

Music’s a hobby of mine. I can sing – I’ve made a few songs. It’s something I enjoy.

You never had any amateur bouts, so your first ever fight was your professional debut [a second-round stoppage of John Mason in June 2013]. Were you nervous that night?

Not really, no. With me, you’re not dealing with a normal case. I’m from a family of high, elite-level boxers, so the sport is in me. Not every 35-year-old could just jump into a professional boxing ring for the first time, so this is a special case. I’ve got inner-confidence, and I know I can fight – that’s the reality of it. I’m undefeated, so people are starting to believe now.

After a quartet of four-rounders and a pair of six-session contests, you had your first 10-rounder in March, earning a shut-out points win against Ivan Stupalo. How did you find this step up?

It wasn’t a problem, because I look after myself. I train ridiculously hard, and do what I’ve got to do to make sure that I’m fully prepared when I step into the ring. I’d say boxing training is tougher than football training.

You defeated John McCallum via sixth-round retirement in a British super-middleweight title eliminator in October. When you made your pro bow at the ripe old age of 35, did you ever dream that you’d reach this level?

Of course you dream. I’m confident, but you can only go by each fight. I know that in boxing, one punch can change everything, so I respect the sport. When I turned pro, I set out to win something, and I did that [the vacant International Masters super-middle strap]. Anything more will be a bonus. I conduct myself in the right manner, I train really hard, and I’ve got a good pedigree – I’m making noise now.

In the build-up to your clash with McCallum, there was a lot of animosity between the two of you following some comments he made about your battle with depression. What did you make of his taunts?

McCallum shot himself in the foot really, with all the things he said before our fight, and all the abuse he gave me about my personal issues. The kid ended up retiring on his stool at the end of the sixth round. He had a decent amateur career, and was unbeaten as a pro. He’s got a lot of mouth, but I just totally schooled him. I probably lost two rounds out of the six if I’m being honest. I bullied him, walked him down, and broke him down.

Having put yourself into a position to box for the Lonsdale Belt after just 28 months as a professional, and at an advanced age, does part of you wish you’d pursued boxing from your youth, instead of football?

No, not really. Like I said, I had 18 years as a professional footballer. I don’t regret my football career. Boxing-wise, I’ll go as far as I can. Callum Smith obviously won the British super-middleweight title, but whether he chooses to hold on to it and defend it remains to be seen. I think he’ll probably decide to focus on capturing world honours instead, so if the title becomes vacant, then so be it. Smith’s a fantastic fighter, as is Fielding,
and I respect them both a lot. But if I did get the chance to challenge Smith for the title, I’d grab the opportunity with both hands.

Curtis Woodhouse switched sports from football to boxing like yourself, and famously won the British super-lightweight crown last year. Does his achievement inspire you?

His story is very inspiring. It’s a little bit different to my story – the only similarity is that we both played professional football before becoming pro boxers. If you look at everything else around it, the stories aren’t the same. We’re different weights for one. My weight, super-middle, is not an easy weight. The guys are heavy and they hit hard. Also, Curtis was 26 years old when he had his first pro fight, so our stories are a little bit different. Nevertheless, he’s a very inspiring man, and he opened up a lot of doors for guys like me.

Overall, do you feel that your name value – as an ex-pro footballer and a member of a renowned fighting family – has been a help or a hindrance to your boxing career?

I don’t think it’s been a help or a hindrance. I’ve been fighting on small hall shows and working like any other pro, just trying to get to where I think I deserve to be. It’s only really now that things are starting to click for me. I haven’t had a silver spoon in my mouth because of my surname – I’ve done it the hard way.

You’re 37 years old now. When do you see yourself hanging up your gloves, and what do you hope to achieve in the ring before you call it a day?

I really couldn’t say when I’ll retire. I feel like I’ve achieved already. It could’ve been a lot worse than it’s turned out. I’ve been underestimated, but I’m just doing what I’m doing, and I’m winning. As I step up in class, I’ll make sure my performances reflect that. I’ll give my all. When my boxing career ends, it ends.