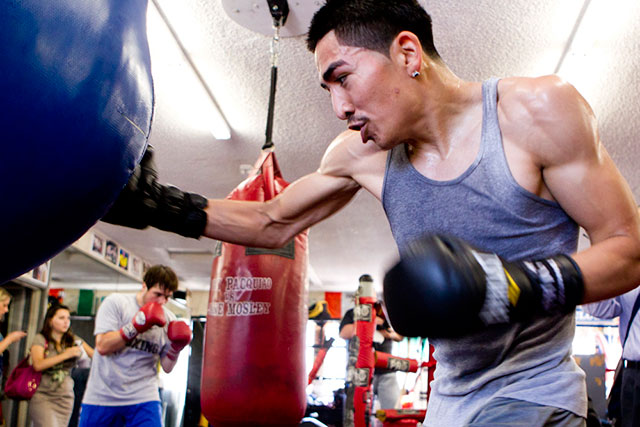 He must get past Abner Mares next weekend first

UNBEATEN Leo Santa Cruz hopes to win a world title in a third weight class as he moves up to featherweight to take on Abner Mares at the Staples Center in Los Angeles on August 29.

Having already won world honours at bantam and super-bantamweight, Santa Cruz has moved to 126lbs to take on former three-weight world champion Mares in a non-title bout.

The 27-year-old has received criticism for not always taking on the best, but he now hopes a win over the highly-talented Mares will earn him a title shot.

“I want to prove to everyone that I am worthy and am in the upper echelon in the featherweight division,” he said.

“I want to go after world title at 126lbs, and I know I could do so by fighting and doing very well and winning against Abner Mares.

“I think it’s the best fight [for me] because Abner Mares is a natural featherweight right now and he’s a great fighter and can do everything. So, getting a victory against him is going to put me on the big level, it’s going to put me to the next level and show that I’m ready for the rest of the fighters in the division.”

With fighters like Gary Russell Jnr, Lee Selby and Vasyl Lomachenko holding titles at featherweight, the winner of Mares-Santa Cruz would have some exciting options.

Santa Cruz also described his bout with Mares as the biggest of his career to date, a sentiment Abner has reciprocated, but also feels they will put on a show to remember.

“It’s the first time I’m the main event, and also the first time I’m going to fight a fighter that’s on a big level. Like the fans said, they wanted me to fight a fighter that is at the elite level, and I think Mares right now is the hardest opponent I ever faced. So that plus me being the main event is like the same excitement as I’m fighting for a world title.