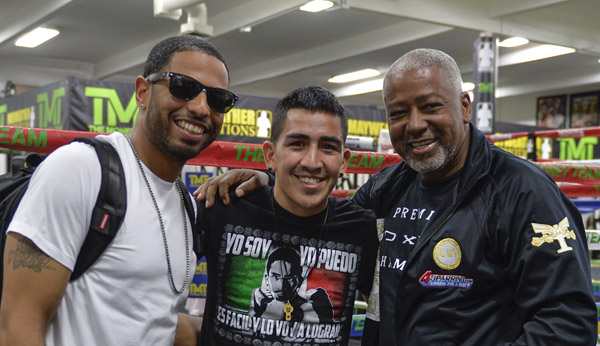 WBC super-bantamweight champion Santa Cruz is in the dark, just like the rest of us writes John Dennen

WE know Leo Santa Cruz is boxing on the  Floyd Mayweather–Manny Pacquiao undercard on May 2 at the MGM Grand in Las Vegas. We just don’t know who he’s boxing yet. And nor does he.

“I don’t know who I’m fighting yet, but I’m sparring different guys with different styles,” the WBC super-bantamweight champion said. “I’m very grateful for the opportunity to fight on such an unbelievably huge card. I really want to thank Floyd Mayweather.

“Any boxer would like to be on this card where millions of people are watching. I’m happy to represent Mexico on this night and on this fight card.”

With Guillermo Rigondeaux, Carl Frampton and  Scott Quigg all in his division there are highly appealing fights out there for a super-bantamweight world champion. But we don’t expect to see those match-ups any time soon. The later it gets the lower caliber of opponent he’s likely to get. But Santa Cruz isn’t dismissing this platform. “I look at it as a key opportunity for me to make an even bigger name for myself, which is my goal because one day I want to become a superstar like Floyd. That’s why I train really hard all of the time,” Leo said. “There are no little fights for me. I consider every fighter dangerous. You lose when you think a fighter is not on your level and then he comes in hungrier than you. That will never happen to me.

“There’s always a lot at risk for me. People keep talking about all of these big fights, but if I don’t win now, there will be no big fights in the future.

“I have to stay concentrated. I have to maintain focus and concentration. I can’t get ahead of myself. I give 100 percent in training and in the ring. I always want to put on a great fight for the fans.”