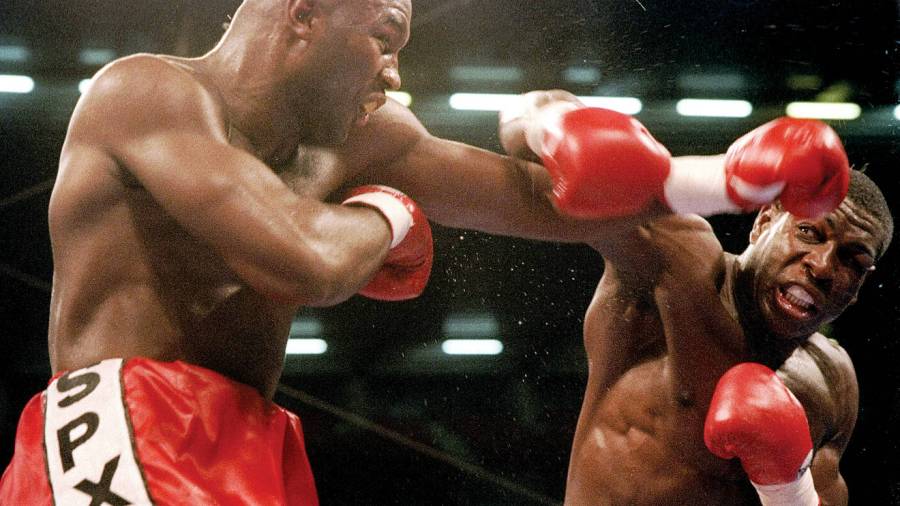 BACK in 1993 there were dead deals, live deals, ugly deals and then a great heavyweight fight between Lennox Lewis and Frank Bruno one cold and miserable night in Cardiff.

Lewis was meant to fight Riddick Bowe, Don King wanted him stripped and for six months there was endless talk of a fight with Bruno. It was a tough time for Lewis, make no mistake.

The final punches of the Bruno fight salvaged a terribly frustrating year for Lewis and put a vicious end to yet another fearless ring appearance from Bruno. The savage truth is that Bruno, a man too often ridiculed, simply had no idea how to lose. He was always too brave for his own good. Lewis, however, did know how to win and after a few hard rounds in the drizzle of a midnight scrap, he found his senses and range and started to really hurt brave Bruno. It was, in the end, a pitiless finish to a fight where the bad blood was truly toxic.

Tyson Fury, Dillian Whyte and their men and women are amateurs in the hate game compared to Bruno, Lewis, Panos Eliades, Jarvis Astaire, Dan Duva, Laura Bruno, Kellie Maloney and Mickey Duff. And, several lawyers, agitators and wounded victims away from the spotlight. It was an unforgettable and unmissable fight. It is still amazing, even allowing for the late start and the cold, that so few actually attended.

In every single possible way, the WBC belt was a totally unnecessary piece of costume jewelry on a night when boxing in a British ring reached a brand new and frightening personal level. The final seconds were arguably the most savage ever seen in a British fight; there was too much pride on a night of storms. Bruno was left in wasteland, his face swollen, his heart broken and Lewis was dragged off, still snarling and trying to throw punches. It did, at that moment, only barely qualify as sport.

In the melée at the end, Kellie Maloney offered a sympathetic shrug and said to Laura Bruno: “That’s boxing.” Laura spat in her face. There was far too much nastiness in the ring that night. “It was bad, real bad,” said Anthony Gee, a close friend who carried the WBC belt to the ring for Lewis. Duff was furious, sickened that Bruno’s concentration had let him down again. The scores were 57-57 twice and one judge had Bruno in front 59-55 when the stoppage came at 72 seconds of the seventh round.

It was epic. And what a story of a fight it was.

Bruno fell out with Lewis in the angry months before the fight. Bruno always insisted that Lewis had changed and was responsible for the acrimony. Lewis never cared, he just got on with business. There was a lot of talk about identity – Bruno was angry, it was personal and lawyers were involved.

Bruno and his people wanted the fight at Wembley, indoors. Duff never liked Lewis, never believed he was an attraction, never thought much of him as a fighter. Instead, Eliades took the fight outdoors to Cardiff in October. Well, it actually started in September, but Bruno entered the ring as the challenger close to one in the morning and it was the first of October. It was a risk, taking the fight out of London. There was, so some claim, a “rain” clause in the contract; if the fight was stopped after four completed rounds because of torrential rain, the scorecards would decide the winner. If it had rained any harder, Bruno could have won. Bruno came to the ring with his boots taped inside a couple of plastic shopping bags. This is the fight where everybody in the Lewis camp insists that he was sleeping in the dressing room up until a late, late call. Maloney told me Lewis was sleeping 20 minutes before the first bell.

“I kept telling him to concentrate, to concentrate,” said George Francis several years later. Francis was brilliant in the corner that night. The fight’s sudden switch is still chilling to watch; on the night, perched on the edges of the wet canvas, it was like being inside a film with slow-motion highlights. I knew it was history; it felt very, very special.

Lewis lands with a left hook, Bruno sags, Lewis pounces and the punches come. They are a blur in the rain and perhaps as many as 20 land somewhere above Bruno’s neck. The fight is over. Bruno had concentrated, he did nothing wrong. Lewis found the punches because that is what great fighters do.

Laura Bruno was comforted by Violet, Lennox’s mother, in the ring. There was so much happening at the end, but I will always remember Frank’s bruised face on George’s shoulder at one point. It was not 10 feet from my position.

At ringside, my pad was inside my soaking see-through poncho. I left for the conference with my notes stuffed down the front of my kecks. I poured rain out of my shoes hours later in my hotel room. It must have been nearly 5am.

I have heard a dozen figures mentioned for the attendance that night. I do know that three weeks before the first bell, 11,000 tickets had been sold and Panos and Maloney needed 15,000 to break even. Bruno cleared one million, Lewis three million. However, like all figures in boxing, you can alter the totals with each very different and often bitter retelling. I guess about 25,000 were there that night. It would sell-out now in record time and 85,000 lucky souls would get to see what we saw that night.

Under my poncho, I was on the phone filing my copy. There was no mobile, the paper had installed a phone for me.

In defeat, Bruno was heroic. He was damaged and his pride had been battered. “I’m a better fighter than I have ever been given credit for.” He was, by the way. Bruno won the WBC heavyweight title less than two years later.

Lewis became a modern great – the Bruno fight was part of that journey.