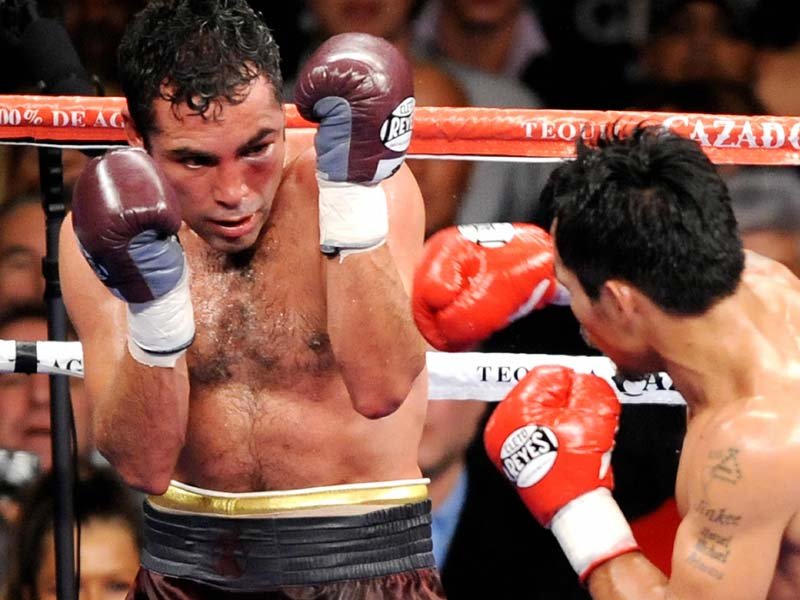 Two men Mayweather has beaten, Oscar De La Hoya and Manny Pacquiao, met in 2008 in what would be the former’s last fight.

At the time a lightweight champion who had started at fly, Pacquiao was to make a big leap to welterweight where De La Hoya would be the significantly bigger man. Oscar had not fought at welter since 2001, having operated at light-middleweight and middle in the interim, but insisted he felt like “king kong” prior to facing the Filipino.

In preparation, Pacquiao’s trainer Freddie Roach offered $1,000 to any of his charge’s sparring partners if they could knock him down – none did. A tornado inside the ring, Pacquiao was considered by many the best fighter on the planet at the time. What Manny has gone on to do since only adds to how big of a fight this truly was.

At 35, De La Hoya was six years Pacquiao’s senior bur our preview noted the age gap would not be “as significant as Pacquiao’s speed and energy.”

Billed as ‘The Dream Match’, the fight was a huge event which sold out in hours and became the fourth non-heavyweight fight in history to surpass one million pay-per-view buys in the US (it totalled 1.25million).

Pacquiao stunned the world by outclassing De La Hoya over eight brutal rounds, running our prediction of Oscar winning via stoppage. With blurring hand speed and spiteful power, he bludgeoned ‘The Golden Boy’ who elected to not come out for the ninth round.

De La Hoya announced his retirement soon after and focused solely on his promotional company. He has been tempted to return a few times, but has resisted the urge. Although he did not perform well, De La Hoya should be commended for taking on such a phenom in his final fight.