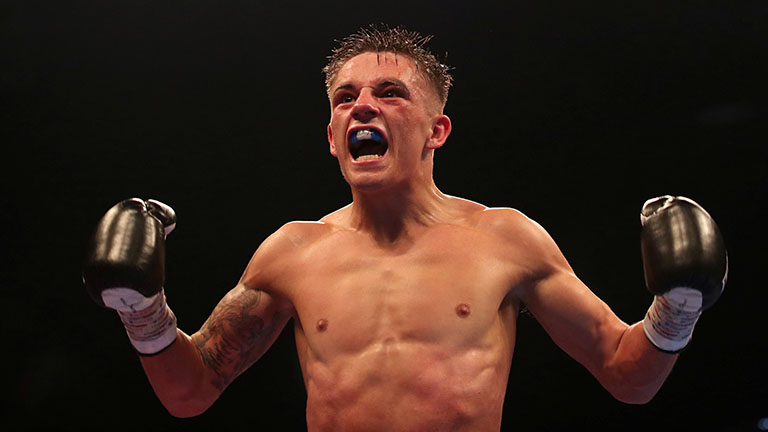 LEE McGREGOR set up a potential showdown against fellow Scot Kash Farooq with a stoppage win over Scott Allan.

The Edinburgh bantamweight retained his Commonwealth crown in a sports hall next to the Sir Chris Hoy Velodrome at the Emirates Arena.

The fight, which topped the second night of an ‘MTK Fight Night’ doubleheader after Steven Ward and Liam Conroy served up a classic in Belfast 24 hours earlier, began at a rapid pace, with McGregor taking the fight to Allan, who was stopped by referee John Latham after 1-45 of round eight.

McGregor came off with the harder and more damaging shots in the early stages and even had time at the end of one of the rounds to retaliate towards a fan of Shotts’ Allan who was tormenting him from ringside.

After two close rounds, McGregor began to take over in the fourth and opened up a bad cut around the right eye of Allan.

“The Title Taker” came swinging back in the fifth and was connecting with good punches from angles. But with around a minute to go in that round, Allan was stunned badly from a body shot and then he was worked over with head blows.

He had spells of success in the moments that followed but the unravelling came in the eighth. “Lightning” once again had Allan in trouble with shots to the head and body, finally putting him down. Allan — who protested to the referee that he wasn’t hit with a shot and instead slipped — beat the count, but he was being driven back as the referee jumped in to wave off the fight.

“It went exactly how I thought it would go,” said McGregor, who was joined at ringside by British bantamweight champion Farooq. “He started to feel my power and we took him out. I was breaking him down and it was a good performance.

“Mentally and physically, I’m in a great place and I’d love to fight Kash next. I’ve got a lot of respect for him as we’ve grown up together in the amateurs, but this is business and it would be a huge fight for Scotland.”

Greenrigg’s Kieran Smith is planning a break after keeping hold of his WBC International Silver title with a win over Mexico’s Ivan Montero.

The super-welterweight was on top throughout and, though there were three knockdowns in the fight that were ruled slips, he came out the winner courtesy of a technical decision.

A head clash in the final of the 10 rounds saw Montero’s nose bloodied and referee Latham took him to the corner and immediately waved off the action. The three cards at the time of the stoppage were 99-91 and 99-90 twice.

But Edinburgh’s Lewis Benson was forced to survive a few scares against game Frenchman Renald Garrido before being awarded a controversial 77-75 scorecard by referee Kenny Pringle.

It was a back-and-forth contest that the visitor thought he had won after the eight rounds.

Jack Turner got his second win as a pro, winning a shutout to retain his unblemished ledger.

The Glasgow bantamweight, who had “Granda” proudly displayed on the back of his green tartan shorts, somewhat had it all his own way against Girona’s Jose Hernandez as the referee Kenny Pringle gave him a 40-36 win before overseeing Kelty southpaw Craig Morgan’s two-knockdown four-rounder against Girona’s Elvis Guillen which was scored 40-34.

Reece McFadden continued his rise through the ranks by remaining undefeated. The Commonwealth Games bronze medallist from Motherwell — who was most recently in action on the World Boxing Super Series undercard at the SSE Hydro in Glasgow back in May — outpointed Girona’s Joel Sanchez.

McFadden, who was bloodied by the left eye in the final round from a head clash and suffered a cut which required stitches, got the verdict on referee Kevin MacIntyre’s 60-54 scorecard.

And Glasgow’s Craig MacIntyre produced a dominant display as he dropped and stopped Plymouth’s Chris Adaway. The super-lightweight, who recently signed with MTK Global, finished the job after 2-58 of the third as third man Kevin MacIntyre saved Adaway from further punishment.

The Verdict McGregor gears up for tougher tests as MTK continue takeover of small-hall boxing.