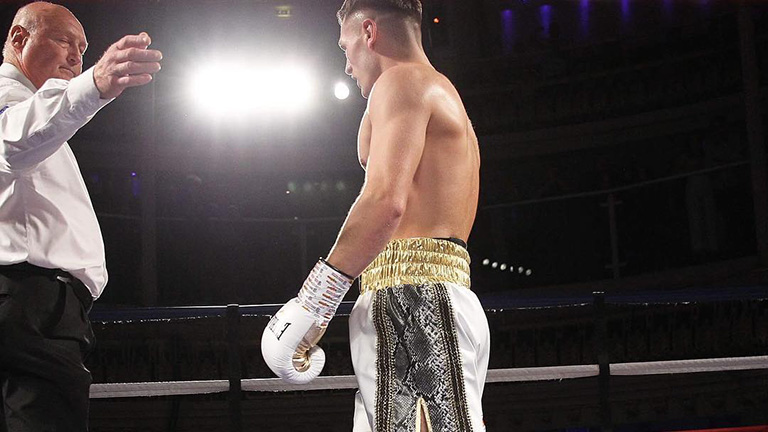 Lee Cutler makes a statement. Will Hale reports from ringside

BOURNEMOUTH’S Lee Cutler headed up a Bendall’s Boxing Promotion’s card at the O2 Academy and took out Port Talbot’s Geraint Goodridge at 2-20 of the second in a mooted six-threes.

Boxing at seven pounds heavier than a fortnight ago in Southampton, Lee picked his punches well in an opener in which he was both clever and busy. Adopting a David-Haye hands low sharp-shooter style, Cutler connected with an expert right uppercut through the guard.

The end came in the second after the Welshman was decked three times. Geraint was hurt by a right hand and the follow-up attack floored him for a count of nine. After a brief exchange, another right from the Bournemouth man repeated the trick and when a further two-fisted barrage had Goodridge climbing off the canvas again the evening’s referee Lee Cook waved the affair off after the mandatory eight.

Fight of the night plaudits were taken by debutants Peter Nurdin, appearing in his home town, and Walsall’s Kearon Thomas. After a nervy first stanza, a short right felled Thomas in the following session.

Kearon however came on strongly over the next two rounds. He smashed out Peter’s gumshield in the third and weathered a fierce 30-second assault at the start of the last to take the session on my card. At the close, referee Cook’s 38-37 slate in Nurdin’s favour mirrored my own.

The Verdict Cutler makes a statement and is starting to build career momentum.