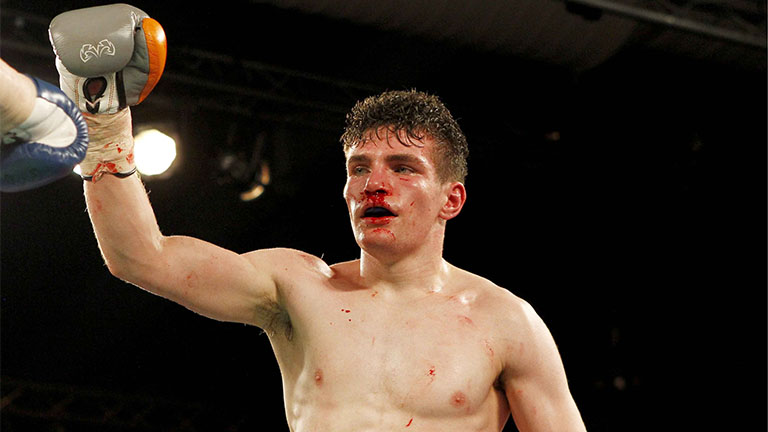 When and why you started boxing:
I was about 18 when I started at Handsworth ABC with Ronny Tucker. I’d always been a big boxing fan and I’d always wanted to do it. I got bullied at school and it was something I felt I needed to do.

Best fight you’ve seen:
It’s too difficult to pick just one because I’ve seen so many great fights.

Personal career highlight:
The first time I boxed on Sky Sports against former British champion Paul Appleby on a Ricky Burns undercard [l pts 6 – September 2013]. It was a good experience.

Toughest opponent:
I’ve boxed a lot of tough lads, but I’d have to say that Luke Campbell is probably the best I’ve fought [l rsf 5 – November 2013].

Best and worst attributes as a boxer:
I’m a good body-puncher and I’m tough, but I’m also impatient and I can get drawn into brawls very easily.

Favourite meal/restaurant:
It’d have to be a vegan burger at Make No Bones in Sheffield.

Best friends in boxing:
My coach, Robbie Sivyer and my manager, Carl Greaves, plus everyone at Spire Boxing Academy in Chesterfield and The Fitness Factory in Sheffield.

Other sportsman you would like to be:
Nate Diaz from the UFC. He’s cool and I really like MMA as a sport.

Last film/TV show you saw:
I watched Bruce Lee’s Enter the Dragon for about the 50th time last night!

Who would play you in a film of your life:
Miles Teller was good as Vinny Pazienza in Bleed for This. I also liked him in Whiplash.

Have you ever been starstruck:
Yes, when I met Ricky Hatton. He was an idol of mine growing up.

Last time you cried:
Being a vegan, it was probably when I saw some slaughterhouse footage to be honest.

Best advice received:
I’m not very good at taking advice. I just tend to listen to myself.

Worst rumour about yourself:
I don’t think there’s been any rumours about me!

Something not many people know about you:
I’d consider moving into MMA once my boxing career has finished.