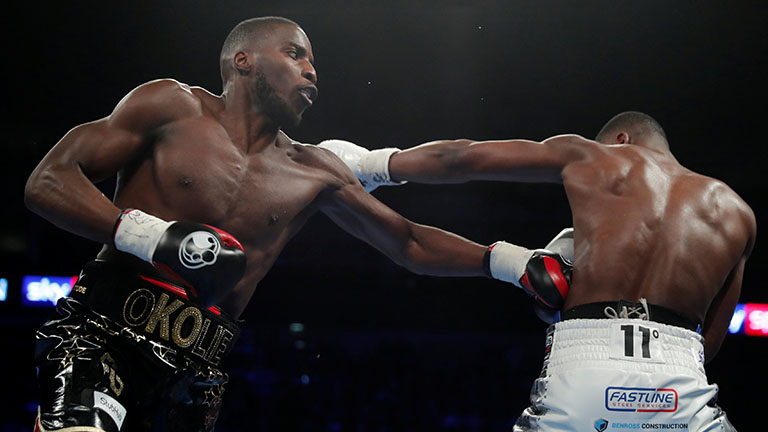 LAWRENCE OKOLIE is no stranger to moving quickly. With little amateur experience to his name he qualified for the Olympic Games and on June 6, in only his ninth professional fight, he will challenge Luke Watkins for the Commonwealth cruiserweight title.

Okolie’s ambitions extend further. He wants to compete at British and European level and ultimately join the elite at the top of the division. Lawrence has been watching the World Boxing Super Series cruiserweight tournament with interest.

Reflecting on Murat Gassiev and Oleksandr Usyk, he said, “They’re amazing but more than anything else they know how to control the pace, stay mentally switched on for all those rounds, that’s it really. There’s nothing amazing about them other than experience. So given time, a 12 rounder here, another couple this year, I’ll build up that conditioning and that experience. This fight I might learn something, next fight learn something and by the time I get to that level I’ll be ready.”

His prediction for the Usyk-Gassiev Super Series final? “I think Usyk’s going to be able to outbox him because he’s fit so he’ll be able to keep it long for the majority of the fight. Unless he gets caught by Gassiev and stopped I think he’ll outbox him,” Lawrence said.

Okolie is a big cruiserweight who has been sparring heavyweights regularly. He could move up in weight eventually, but not necessarily any time soon. “I feel good, it just depends. I make weight extremely well,” he said.

“I think Brian [O’Shaughnessy, his trainer] expects me to move up. But for me until it becomes an actual issue with my performance I’m comfortable banging out cruiserweights.”