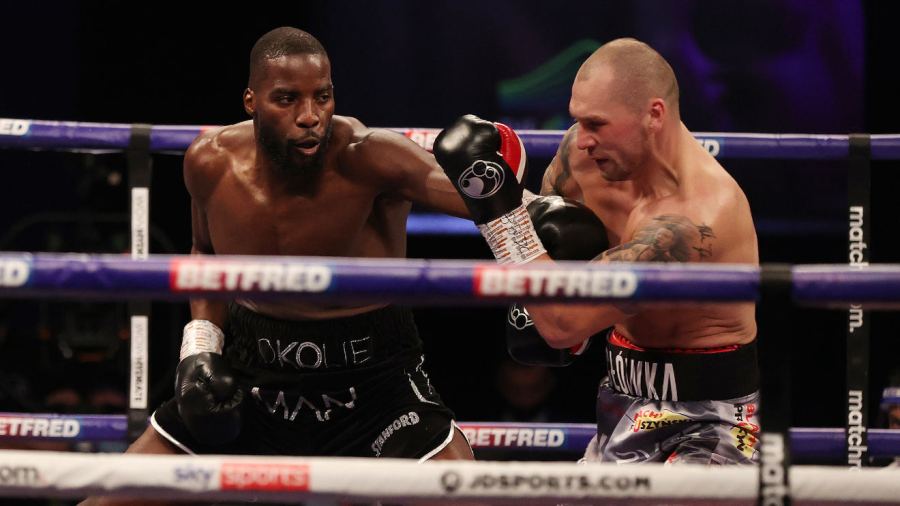 LAWRENCE OKOLIE became the WBO world cruiserweight champion at Wembley Arena on Saturday (March 20) as he left Krzysztof Glowacki laid out on the canvas 46 seconds into the sixth round.

Okolie, already a British, Commonwealth and European champion, was stepping up to fight for a world title in only his 16th professional contest. But he remained composed from the beginning against Glowacki, a former world champion himself. Okolie let the Polish southpaw come to him and met him with constant jabs. Even when those lefts were light, and awkward as they jarred out, they were unpredictable. Glowacki soon found he couldn’t get past them. When he tried ducking to his left, Okolie stuck him on the end of far-reaching, heavy right hand.

The Londoner gave Glowacki a taste of his power, hooking in that back hand in the first round. But he began to open up with punishing shots in the fourth. Glowacki felt those clearly. Uncertainty about when to throw himself crept into his work and the Pole found himself flinging short hooks from too far out and Lawrence could sidle away to a comfortable distance.

All Okolie needed to cap the performance was a finishing blow which he delivered in devastating style, courtesy of the left setting up a swift cross and depositing the stricken Glowacki flat on the canvas. Britain has a new world champion in Okolie, at an early stage of his career too.

On the undercard Liverpool’s Anthony Fowler looked dangerous as he destroyed Jorge Fortea in three rounds. The Spaniard backed up in the first round, but methodically Fowler tracked after him. His long jab clipped him and when Fortea burst forward in the second round, the Liverpudlian greeted him with his heavy right, hacking his back hand to the body. He dropped Fortea in the third. Once the Spaniard struggled up, Fowler launched his right over the top to send him back to the canvas. Even though the bell sounded to end the round, Fortea could not beat the referee’s count.

Joe Cordina showed little effects of a long time out as he returned to action against Faroukh Kourbanov. The Welshman’s reactions were sharp, his jab accurate as he outmanouvred Kourbanov over 10 rounds. Cordina uncorked the flashier combinations, although Kourbanov weathered them well and fired back when Joe stood his ground.

Cordina seemed in control, though one of the judges surprisingly scored them level at 96-96. However he took a majority decision 98-93 and 96-95 for the other two judges.

Chris Billam-Smith overcame the gallant efforts of Vasil Ducar  over 10 rounds. He put the Czech down twice and Ducar felt the weight of the Bournemouth man’s punches, especially to the body. But nevertheless the game opponent slung combinations to the jaw when he could. Billam-Smith let too many of those through but could not be denied a unanimous decision win.

Ellie Scotney looked dynamic as she caught Maily Gangloff with sharp uppercuts and hooks, taking a points decision after six rounds. Ramla Ali outboxed Bec Connelly, hurting her at times, but ultimately winning by decision too.

Bradley Rea dominated Lee Cutler, sending him flying into the ropes with a dangerous left hook and heavy straight cross, putting him down three times before halting him in their first round.