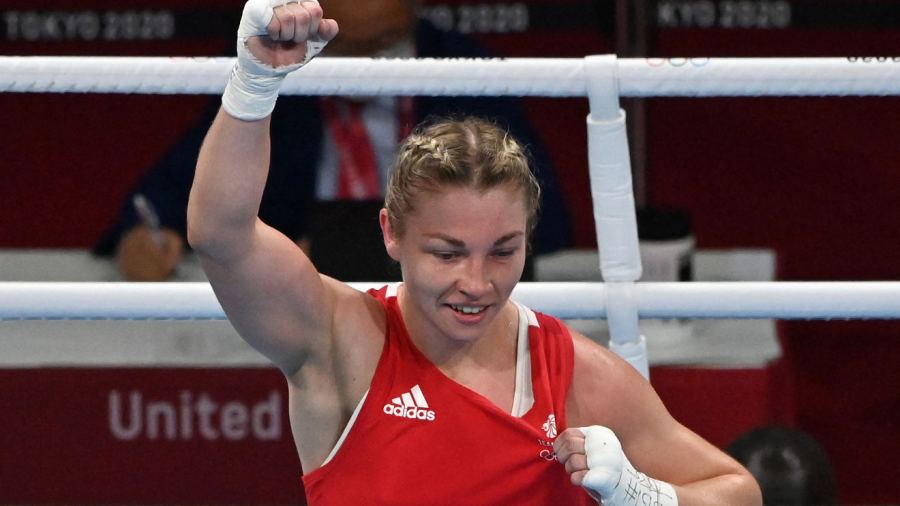 LAUREN PRICE confirmed an Olympic medal in an assured performance over Panama’s Atheyna Bylon in their middleweight quarterfinal at the Kokugikan Arena in Tokyo on Saturday (July 31).

The Panamanian was a former welterweight World gold medallist, who had beaten Price once in the past. But the Welsh boxer was composed throughout, countering Bylon, making her miss clumsily and striking in southpaw one-twos and rapid right hooks to keep on scoring. Bylon’s discipline deserted in the third round as she suffered a points deduction. GB’s Price was a wide unanimous decision victor.

“I wasn’t a full-time athlete then [when she’d lost to Bylon]. It was six years ago and I was only just starting out and I’ve come on in leaps and bounds since then,” Price said. “I knew she was a good girl, she was no mug and if you look at her physique as well, she is quite a strong girl.

“But it was a case of using my tactics, use my speed and try and frustrate her more than anything so she would have to come after me in the later rounds.”

“I listened to my corner and I’m an experienced girl now. But they know me inside out and as long as they are talking me through the fight then I’m 100% confident in how it’s going,” she continued. “When I go back to the corner and get a little tap on the shoulder I know I’ve done well. I just keep it going and listen to them.

“I have got every faith in them and that’s a big thing as well. I’m just over the moon really.”

Price has to wait until Friday (August 6) to box a familiar rival, Nouchka Fontijn in the semi-finals. “The rivalry between me and Nouchka is one of them really. But we are all top class girls. It’s who is better on the day, but I don’t fear anyone,” she said.

She has guaranteed herself at least a bronze medal but will be going for a place in the final. She is now also Wales’ first female boxer to win an Olympic medal. “I’m making history all the time, it’s a bit crazy really. But I am just loving the journey. It hasn’t really sunk in yet that I’m an Olympic medallist, but I’m over the moon,” she reflected. “It has not really sunk in yet but this has been my dream since I was an eight-year-old. Just to be an Olympian, let alone medal.

“I cannot really put it into words what it means to me yet. I was a bit emotional in the ring as soon as it finished as I knew the decision as we get the scores as we go along.

“It was kind of hard to hold it in, but it’s been emotional this week as well seeing the whole team medalling.

“You have kind of got to hold a bit back to concentrate on yourself but we have got a great team and there are many more medals to come.

“It has just all paid off.”

In a tremendous featherweight semi-final Britain’s Karriss Artingstall was left it all to do after the first round. Japan’s Sena Irie boxed cleverly in the opening three minutes, lively with her work as she ducked shots and countered. But Artingstall came storming back in the second, slamming through her southpaw left cross and working the body and head with right hooks. The contest was in the balance in the third. Artingstall worked hard, grinding forwards behind her punches. But Irie still grabbed counters when she could, connecting. There was almost nothing to separate them. But a split decision just went to Irie. It means Artingstall is an Olympic bronze medallist.

GB lightweight Luke McCormack came up against brilliant Cuban Andy Cruz. The latter, who’s won gold at the last two World championships, showed why he is such a favourite at this competition. He landed jabs with lightning speed, using the shots to set up harder crosses and the occasional uppercut. McCormack was undaunted. He dug solid shots into the body and fired his own punches into their exchanges, fighting back in the last round. But he could not sway the decision. Cruz took a unanimous verdict to eliminate Luke, the twin brother of GB welterweight Pat McCormack.

British flyweight Galal Yafai progressed to the quarterfinal but the judges had his three rounds with Zambia’s Patrick Chinyemba much closer than they appeared. Yafai had closed Chinyemba down in the first round and handed him a standing count in the second. But the split decision was finely balanced in the end. However it did go to Yafai. He will need to sharpen up but maintain that aggressive output to beat Cuba’s Yosbany Veitia in the quarterfinals on Tuesday (August 3).

Earlier in the day, American 63kgs Keyshawn Davis took a big win over Sofiane Oumiha, the French Olympic silver medallist. Davis secured the first round then in the second he shook up Oumiha with a tremendous right cross. That gave the Frenchman a standing count. Taking a closer look, the referee decided to stop Oumiha, ending it in the second leaving Oumiha to protest vigorously. Be that as it may, it was a lovely punch the American disguised then landed with power.

“Before I threw the punch, I knew it was a close round. The first one [was] and the second one was still close. I was actually holding that punch back because I knew that that punch was going to make a difference throughout the rounds. I seen it, I’ve seen the punch there, and I did exactly what I was doing in practice, practising it, and I landed it. I didn’t know it was going to get him out of there like that, or even hurt him, but it did so,” the American said. “When I was studying him from the first round, from the sparring that we had, he always keep his left hand sticking out. Every time he does his defence he always drops his hands. So I know that if I feint to the body, I already know he’s going to try and counter me, which he was doing from the first round into the second. So I knew it was time to throw that punch.”

“I wasn’t surprised because once I looked back after I was celebrating, I see that he wasn’t all the way there. An experienced guy like that knows how to keep it together as much as possible, but a fighter knows a fighter. He was still hurt.”