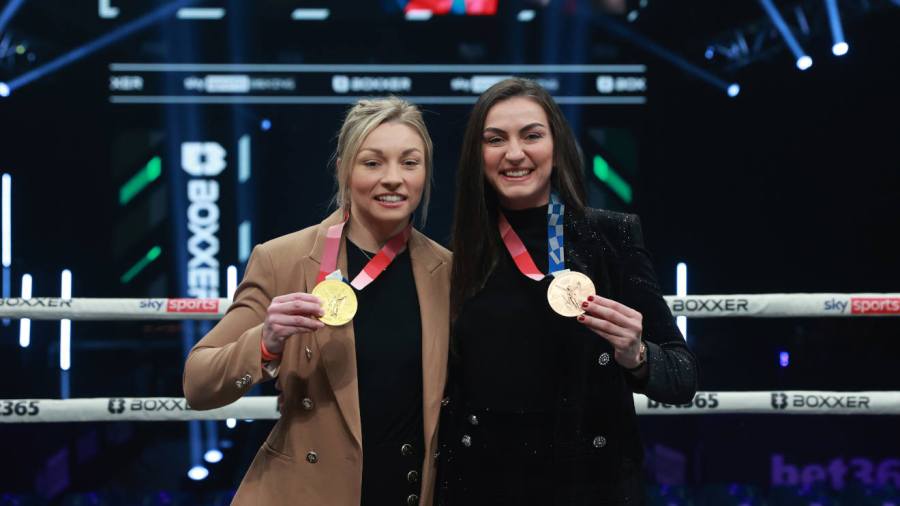 OLYMPIC stars Lauren Price and Karriss Artingstall will start their professional careers in familiar surroundings. The GB Boxing programme is starting a new professional division and the Tokyo gold and bronze medallists will be the first two, of only three, boxers to join it.

Price and Artingstall are promoted by Boxxer and their professional fights will be televised on Sky Sports but now they can continue to train with GB. They will not receive any public money. UK Sport support this move but GB’s funding is reserved for their amateur squad of Olympic hopefuls. Rather the professional boxers in the new ‘Podium2Pro’ group will pay a percentage of their earnings to commission GB Boxing to provide coaching and management services, as well as having the additional option to enlist, and pay for, the services of the sports scientists who already work at the English Institute of Sport. Robert McCracken, the GB performance director, has trained professional boxers like Carl Froch and Anthony Joshua previously but that was in a private capacity. On this new professional programme Price and Artingstall will be able to work with other senior Great Britain coaches as well.

GB Boxing’s core focus is on Olympic success so starting a pro team, albeit a small one, is a significant move. But they expect this development to be mutually beneficial. At the least retaining high calibre Olympians to train and spar with the new squad should benefit the Paris 2024 hopefuls.

The Olympic sport is also changing. Although the ruling had come in for the previous cycle, it was at the Tokyo Games that professional boxers who had rejoined their national teams started to win medals. Uzbekistan and the USA were notable examples of successful Olympic programmes that had integrated professional boxers.

In a similar way this innovation could allow for GB to bring back former squad members and current professionals at certain weights to try to qualify for the 2024 Olympics, if there wasn’t a medal contender that had come through GB’s selection pathway already on the squad at their weight.

“We’ve got to make sure that we’re always keeping our options open and we’re looking at having a talent pool where we can maximise the potential we’ve got,” GB chief executive Matt Holt said. “A key point and key priority for us is that we’ve got to protect the pathway. So we’ve got to make sure that we’re not limiting the options of the boxers coming through the pathway and to make sure, if they’ve got the ambition and the aspiration, they understand they’ve got the opportunity to go to the Olympic Games. That’s at the very forefront of our minds. So there could be a situation potentially where for certain weight categories for example we might not have a medal competitive boxer for the next Olympic Games. Now in that situation it pays for us to have done the work to allow us to think about the talent pool more broadly, to think about how we might potentially then fill that gap.”

The GB pros would be well placed to return to Olympic boxing, if they wanted to, if their professional commitments allowed them to and if there wasn’t already an amateur contender in place. “It’s the perfect opportunity to make that situation work more effectively because you’re engaged with that boxer on a full time basis any way,” said Holt, pointing out they’d be training in the same gym, be working with the same coaches and understand the environment. “The world is changing, we’ve got to be adaptable, flexible, making sure that we’re keeping all our options open to make sure that we remain competitive at the next Olympic Games and then all the Games into the future as well.

“At this stage we want to place the limitation on three [pro] boxers because we want to start slowly and make sure we get this right, see how it works with the boxers and the programme. Obviously the Paris Olympic Games will be a natural review point. If as we expect the programme of activity has gone well then obviously the conversation will then move on to LA [the 2028 Games] and if this something we want to develop further. Again a lot of this is about balancing the different elements. We want to make sure the opportunities are there for boxers coming through the pathway. That’s very, very important to us. But equally we want to win. We want to go to Olympic Games, we want to be competitive. We want to be competitive in every weight category. So the challenge that we’ve got always to justify the funding, to make sure that we’re delivering to the highest standard that we possibly can is to make sure that we’re competitive in each of the Olympic medal winning categories moving forward.”

Uncertainty remains. Currently boxing is not on the programme for the 2028 Olympic Games and IBA, the world governing body, need to meet the IOC’s requirements to restore the sport to the Olympics. Having additional streams of funding might become more important to GB Boxing in the years to come.

Jason Glover, the chair of GB Boxing, said, “Our whole mission is built around the OIympics. I think it’s fair to say if the Olympics in 2028 isn’t going to have boxing then the role for GB Boxing clearly comes into question… There’s been a lot of work that the IBA has been doing to satisfy the IOC in terms of various things around R&Js etc. and we’re hopeful. It’s been a key part of the Olympics all the way back to the start of the Olympic movement. It also offers great opportunities across the world for athletes across all five continents to compete and compete competitively, which is very different to a number of sports, so we would hope with that in mind, with the IBA being able to satisfy the IOC, that it does come back onto the programme for 2028.”

Holt added, “The IOC has made quite clear what is required of [the international federation] to get back on the programme for LA. We know that the staff across the two organisations are working together with a mind to reaching a positive outcome so the opportunity is there for the sport to remain on the Olympic programme, which is what we all hope for. But at the end of the day the international federation has got to do the necessary work to meet those requirements.”