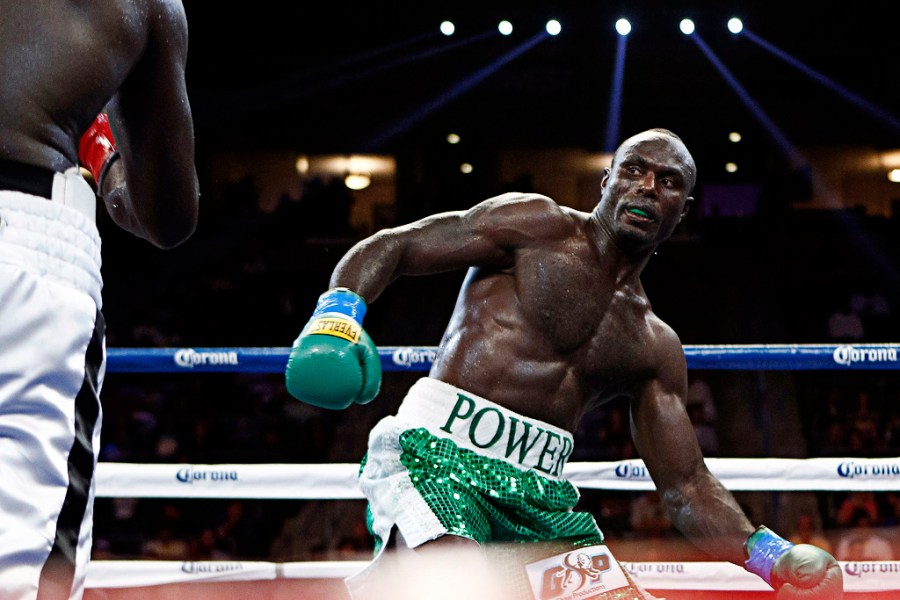 Kayode tells James Slater he is not looking beyond Ortiz

California-based Nigerian Lateef Kayode, 20-0 (16), will clash with the 21-0(18) Luis Ortiz on September 11th in Las Vegas, in a bout that will contest the interim WBA heavyweight title. Many fans will grumble at yet another heavyweight title fight – one they will call bogus – but the clash of unbeatens that will take place two days before the big Floyd Mayweather-Marcos Maidana return just might result in a terrific action fight.

Kayode, 31, certainly thinks so, and the former cruiserweight who was initially held to a draw by Antonio Tarver in his biggest fight thus far – the result being changed to a No-Contest due to Tarver failing a post-fight drugs test – is predicting a KO win over his 35-year-old foe.

Q: First of all, how much do you know about Luis Ortiz?

Lateef Kayode: “Honestly, I’ve never seen too much of him before. But now, with me fighting him, I’m focusing on him, I’m looking at his fights and I’m listening to what he’s got to say. And from what [little] I have seen, he seems to be a good boxer, strong. I’m sure the fight on September 11th will be a lot of fun; it will be a great fight. We’re both trying to prove ourselves.”

You were sparring when I initially called you. Are you out at The Wild Card, working again with Freddie Roach?

“Yes sir. I’m working very hard. I sparred 10-rounds yesterday; I’m working with three main guys – two big, strong heavyweights and a world-rated cruiserweight. They are helping me get ready. Freddie has a game-plan all arranged [for the Ortiz fight] and he has also got me working with a strength and conditioning expert.”

Ortiz is a southpaw as you know. You have no concerns over the southpaw style, having faced Antonio Tarver?

“No, I have no problems with southpaws. Look at my record, I have beaten a lot of southpaws. They suit my style. I hold my hands up high and I put the pressure on. I’m not a guy who talks s**t, but I know I will knock Ortiz out. I know I will. The last guy he fought was 42-years-old and had 10 losses (Monte Barrett). I give him [Barrett] credit because he was good when  he was younger, but no way can Ortiz go through me the way he did him. This is payback time! I’m gonna knock him out, because he makes mistakes and we have a perfect [game] plan. I think they will tell him to run, to move around against me. He says he’s going to come at me, that he’s strong. I know I’m strong, so we’ll  see. I will definitely go right at him. When an opponent hits me, it just makes me crazier! He’s never fought anyone like me before: I can box, I can be aggressive, I have power – I’ve got it all.  This fight is going to be lots of fun.”

Is it your understanding that the winner of you and Ortiz must face “regular” WBA heavyweight champ Ruslan Chagaev next?

“Yes, you are correct. But right now, I’m not thinking about any other fight apart from Ortiz. This is my dream, I have waited so long for my opportunity. I will become heavyweight champion and I want to defend my title and have the big fights. But Ortiz is all I am thinking about right now. My last fight (a 6th-round TKO over Jonte Willis in January), I was in decent shape, I didn’t get much notice. I was not at my best then, and I won it mostly with my experience; that’s why it went six-rounds. But this fight, I am focused, I am disciplined and I am ready! This is my dream and no way am I not ready [to realise it].”

The heavyweight division is very interesting at the moment. Can I ask you your opinion on Deontay Wilder, who everyone seems to be talking about now?

“Yeah, he seems to be a good, strong fighter. But he needs to prove himself. He says he is the best, I say I am the best; everyone says they are the best! He knows what he has to do and I know what I have to do. I will prove myself on September 11th.”