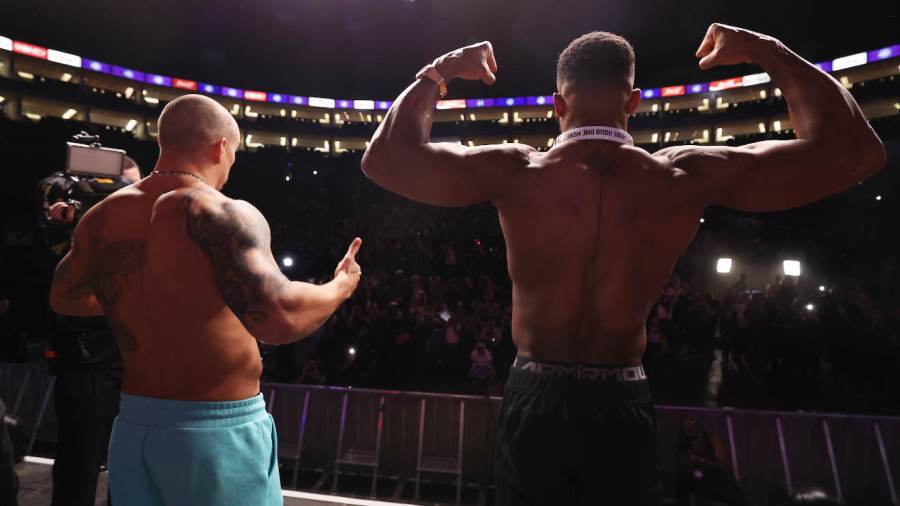 Anthony Joshua returns to Saudi Arabia for another rematch, this time against Oleksandr Usyk on August 20

THE last time Anthony Joshua needed to both exorcise the demons of a painful defeat and secure a payday the like of which most other boxers can only imagine, he set sail to Saudi Arabia in December 2019 and dragged along a well-fed Andy Ruiz Jnr for the ride.

Together, the pair danced with the devil, then ate in hell. They dined initially on Saudi food with Saudi cash before flirting with sheikhs and delivering a pedestrian main event which thrilled nobody other than Joshua, who, to his credit, boxed sensibly to win on the scorecards. It was, on reflection, a shrewd decision to take the rematch there, at least in competition terms, for it put Joshua back in control. He was not only in control of the promotion but, in moving away from both America and his home country, afforded the luxury of boxing in a big ring surrounded mostly by silence, which undoubtedly helped.

In the end, the Ruiz fight resembled a glorified sparring session, one played out before a crowd too rich to pay attention, and Joshua couldn’t have asked for anything more. Indeed, so successful was the venture, the Londoner today announced he will return to Saudi Arabia (the Jeddah Super Dome, Jeddah) on August 20, again in the hope of reversing a disappointing heavyweight loss.

Those two factors will presumably have a greater bearing on the result of the rematch than the location of the fight, but, even so, in getting the fight to Saudi Arabia, the scene of arguably Joshua’s most vital win, his team have done all they can to safeguard his mental state, as well as provided him the ideal setting to focus on executing the game plan many felt he was lacking first time around.

Time will tell. For now, while it’s easy to understand why Joshua is returning to Saudi Arabia, both from a financial point of view and a competition point of view, it would be remiss not to express some disappointment that the rematch isn’t again taking place in the United Kingdom, where fight one was such a success. One might also make the argument that in order for Joshua to truly execute his game plan – that is, the one he needs to neutralise Usyk’s sublime southpaw skills – he will at some point require the roar of the home crowd and all this tends to bring out in him.

Or maybe, for this rematch, like the Ruiz one, that noise is precisely what Joshua, 24-2 (22), is hoping to avoid. Maybe, by virtue of him fleeing the UK, he in turn escapes the microscope, the questions, and the pressure. Maybe it’s for the best.

And yet, if indeed that’s the case, he should probably prepare himself for a different kind of microscope in Saudi Arabia. For though having performed there before, both nothing and everything has changed in the two and a half years since, and in much the same way football and golf have recently fallen under a different kind of microscope, so too will Joshua, Usyk, and boxing, a sport whose house has never exactly been in order but whose family has never seemed as dysfunctional as it does today.