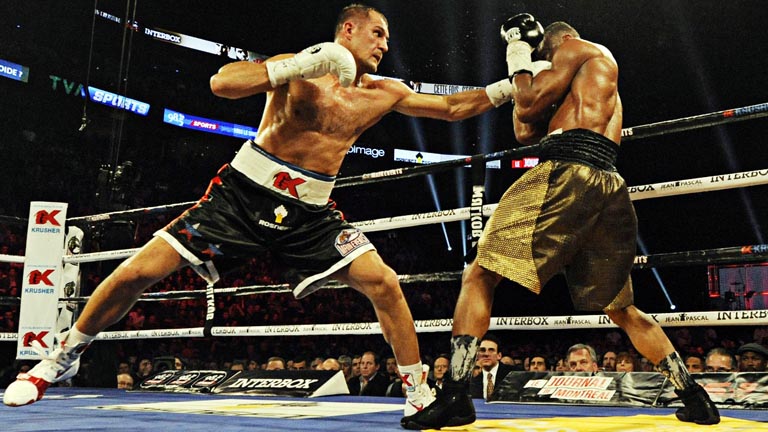 MAIN Events, promoters for unified light heavyweight champion Sergey “Krusher” Kovalev (30-0-1, 26 KOs), were hoping to kick off their promotion this week of the highly anticipated fight between its brightest star and former super middleweight champion Andre Ward (30-0, 15 KOs). The bout is currently scheduled to take place on November 19th.

However, instead of the fight’s official launch party, media members in attendance at the presser were left with more questions than answers at an event more gawky than it was grandiose.

The dais consisted only of members of Team Kovalev, since Ward and company chose to opt out of the proceedings.

The absence of Andre Ward and Roc Nation management was glaring, with initial reports noting that they decided simply to not show up. Though, it was later clarified that Kathy Duva, Main Events chief, was notified last week that Ward would be unable to attend due to the recency of his last fight, which took place in Oakland less than 3 days before.

After a 90 minute delay, Kovalev spoke briefly about the fight and its importance before the conversation dramatically switched toward the issues that Duva’s side claims to be having with co-promoter Roc Nation Sports.

“Living hell is a pretty good description,” Main Events chief Kathy Duva answered when asked how she would describe her dealings with Roc Nation. “There’s a lot of nice people at Roc Nation but, unfortunately, the leadership in their company just is not capable of dealing in good faith.

“We’re trying and as far as I’m concerned we have a deal. We made a deal back in June to put the fight at the MGM. I don’t know what they want. I don’t know what this tactic is that they have employed in the last 48 hours. I can only come to the conclusion, perhaps, that there’s some problem with Andre Ward. I don’t know but I can only speculate. But we have an agreement and we will see to it that we all live up to it.”

Duva, visibly frustrated by the entire ordeal, cryptically referenced her company’s “sticking points” with Roc Nation, the biggest of which being a dispute regarding the proposed location of the event, which was previously reported as the T-Mobile Arena in Las Vegas, Nevada.

A representative of Sid Greenfieg, Vice President of Arena Booking at MGM Resorts International, owners of the arena, told Boxing News that “this morning (Wednesday) was the first I’d heard of this being an issue.”

If progress stalls on Kovalev-Ward, look for Top Rank to attempt a coup of the November 19th date for Manny Pacquiao’s comeback fight against Jessie Vargas.

Bob Arum already has November 5th earmarked at the Thomas & Mack Center, an arena at the University of Nevada’s Las Vegas campus. Moving the fight out of that location, which is dreadfully positioned two miles away from the strip, and into the flashy new T-Mobile arena in the midst of all the casinos is a tempting affair.

Duva, in an interview with UCN Live agrees. “Maybe they are trying to find a way to bully us into The Oracle (in Oakland)…My fear is, of course, you know Bob Arum wants to do a fight in Las Vegas on November 5th and he wants the November 19th date and if we lose our venue on the 19th, my fear is that we lose this date.”

Stipulations in their current agreement allegedly require that the fight take place in neutral territory but location has now become, seemingly, the biggest “sticking point.”

“There’s always a sticking point,” Duva said. “There will be a sticking point until they get in the ring and then I will be able to sit back and watch all of these months of hard work. At that point, Roc nation isn’t going to be able to do anything for Andre Ward anymore.”

We reached out to Main Events and Roc Nation for additional comment but have yet to receive a response.