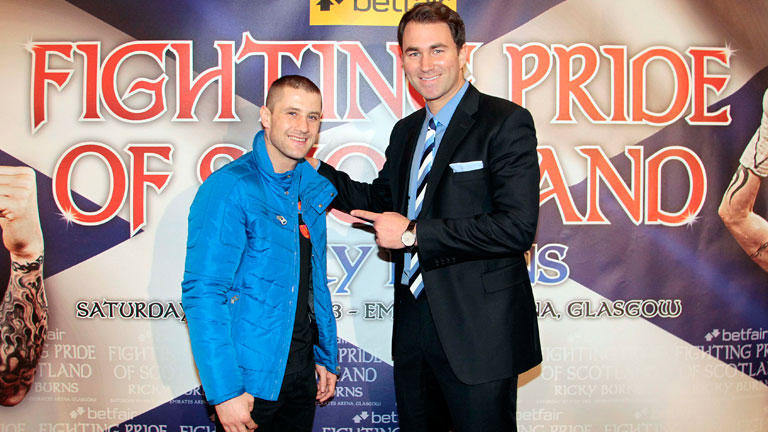 WITH Ricky Burns burns boxing Kiryl Relikh for the WBA super-lightweight title, heavyweights Dillian Whyte (18-1-KO14) and Ian Lewison (12-2-1-KO8) fighting for the British title while Scott Cardle (20-0-1-KO6) defends his British lightweight belt against Kevin Hooper (19-3-KO4), there will be something for all fans as Glasgow plays host to a Friday fight night of championship boxing.

Boxing resumes some normality after the terrible news from last Thursday when Scottish Boxer Mike Towell collapsed in the ring. Towell never recovered and sadly passed away. Matchroom Boxings managing director Eddie Hearn said at the Burns vs Relikh press conference on Wednesday that from midnight Wednesday to midnight Thursday the money from any ticket sold will go to the family of Mike Towell, this gesture comes on top of a fundraising page started by Ricky Hatton which has brought in over 30,000 in donations. “The boxing community need to make sure the family are looked after,” both Hearn and Hatton said.

Burns will be making his first defence of his WBA supe- lightweight strap – his third world title at a third weight – against unbeaten mandatory challenger Kiryl Relikh (21-0-KO19), promoted and managed by Ricky Hatton. Relikh himself will be hoping to upset the odds at the SSE Hydro Arena on Friday night. Burns could face Adrian Broner next, however Burns said, “All his focus at the moment is on Kiryl Relikh.”

Relikh went on to say, “I know I’m an unknown fighter and the public will be backing Ricky – but I don’t care, I’m fit and ready to rip the belt from him.”