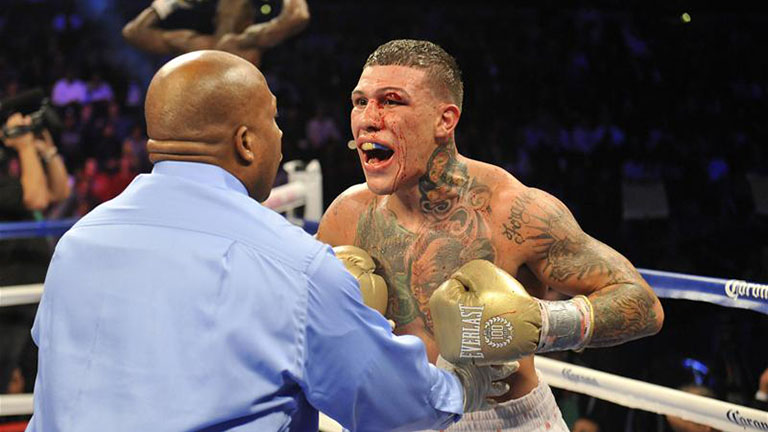 'King' Gabriel Rosado and Willie Monroe Jnr. will face off in a crossroads fight on September 17

Rosado is set to face Willie Monroe Jnr. (20-2, 6 KOs) in a middleweight bout that may determine a future opponent for Alvarez to act as a time-filler while the GGG-Canelo super-fight continues to marinate. That is, assuming the Mexican star can wrangle the WBO junior middleweight belt from Liam Smith next month.

Rosado and Monroe Jnr. are both best known for their contributions to Gennady Glolovkin’s rise to superstardom. They were each KO’d by the Kazakh in the 7th and 6th rounds respectively, with Monroe Jr. hitting the canvas thrice and Rosado getting ruthlessly clobbered until the corner was forced to throw in the towel in one of the bloodiest fights in recent years.

The rugged Rosado, forever a crowd favorite, will be fighting to remain relevant as another loss on his resume will be devastating for his career. He is on a two bout win streak since getting knocked out by David Lemieux in December of 2014 and has found renewed energy under the tutelage of the great Fernando Vargas.

“I’m excited for the opportunity to perform at AT&T Stadium, home of the Dallas Cowboys,” said Rosado. “Fernando Vargas, my trainer and I are on a winning streak and getting better as we continue to work together. We have all the confidence we’ll be victorious on September 17.”

Hailing from the great fight city of Philadelphia, Rosado is well known and respected for his come-forward, never-give up, throw-caution-to-the-wind style. Monroe, not particularly known for his punching power, may be an ideal opponent to highlight Rosado’s finest attribute, his resilience.

“Willie Monroe, Jnr. is in my way of me gaining a world title so I’m working harder than ever before to get that chance again. This is going to be a great fight for all the fans, I know I am coming in with everything I got and I know Willie Monroe, Jr. will do the same.”