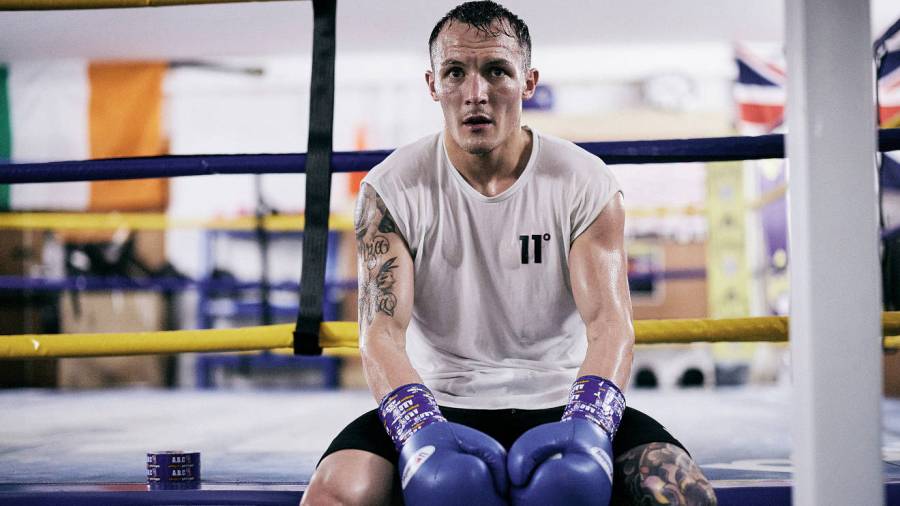 THE featherweight division has slowly but surely emerged as perhaps the most exciting division in Britain over the past few years with high quality and even higher drama almost guaranteed when the leading lights clash. And just a fortnight after Leigh Wood and Michael Conlan combined to produce the frontrunner for 2022’s Fight of the Year, two men well accustomed to thrills and spills collide in another intriguing 126lb encounter. Before Covid hit two years ago, it would have been just about unthinkable that Josh Warrington would ever head into another fight with the ageing Kiko Martínez – let alone below the Spaniard in the world rankings and also as the man in the fight without any hardware around his waist. But Warrington’s world was turned upside down in February of last year by a then-little known Mexican called Mauricio Lara who dropped and stopped him inside nine brutal rounds behind the closed doors of the Wembley Arena.

Earlier that evening, in the very same ring, Martínez had dropped a 12-round decision to Zelfa Barrett. Although the unanimous decision in Barrett’s favour had been disputed by just about everyone apart from the three ringside judges, it was still hard to see a route back to the division’s top table for Martínez. But this is a funny old game. He had seven months off before an eight-round victory over Jayro Duran back in Spain. Now coming off the back of a win, Martínez was able to challenge for a major belt and he had seemed like perfect fodder for Kid Galahad’s first defence.

At 35, he was seen as something of a spent force but one whose name still carried some weight. Indeed, the initial match-up had been criticised by some who were hoping for a sterner test for Galahad. But the veteran made all of those people look incredibly silly when he iced the Sheffield man in the sixth round to produce one of the upsets of the year. Featherweights; you just have to love them.

His reward for that is a presumably money-spinning showdown with Warrington at the First Direct Arena, Leeds, almost five years after they met beneath the same roof for the first time. That night, Warrington maintained his march towards the upper reaches of the world rankings with a majority decision (116-112 twice, 114-114) over the visitor.

The world – and the division – is a very different place these days but a similarly close fight should be expected once more. Warrington has had only two rounds since his defeat to Lara – and that was in their September rematch when a cut sustained by the Mexican meant an early technical draw. Martínez, meanwhile, is full of confidence as a result of that November upset.

All of this makes this a difficult one to pick but it remains incredibly hard to look past Warrington back in front of his legion of raucous fans. Martínez is no stranger to silencing crowds – Bernard Dunne will tell you that – but at 36, this one still seems like a bridge too far. He’s tough though, so a stoppage feels unlikely. Warrington on points.

In the chief support, Maxi Hughes and Ryan Walsh meet over 12-threes in what looks like a guaranteed action fight at lightweight. The 32-year-old southpaw Hughes has often had to do things the hard way as his 24-5-2 record suggests. However, Hughes is one of few boxers whose star has risen dramatically during the Covid era and he is now on a five-fight winning streak stretching back to February 2020. In fact, the last person to beat him was Walsh’s twin brother Liam in November 2019.

Ryan, 35, has operated mainly in the lower divisions and is a former British champion at feather. However, he weighed in at 144lbs for his last outing, a six-round points win over Ronnie Clark in December, so will have dropped at least nine pounds since then for this one.

But in Hughes he is facing someone in the form of his career so will be up against it from the outset here. “Iron” Ryan is made of stern stuff and has never been stopped, so a Hughes points win seems the logical pick.

One of Britain’s very best prospects Dalton Smith takes another step up against Ireland’s Ray Moylette over 10 threes at light welterweight. Smith has progressed serenely to 9-0 so far, but his eight-fight KO streak was stopped by Brian Pelaez in their September clash.

Those 10 rounds will have served him well and he looks well placed to sparkle against “Sugar” Ray. The Irishman, whose career has been split on either side of the Atlantic, has boxed for just one minute and five seconds since his first career defeat back in December 2018 and he is yet to face a puncher like Smith. Expect the former amateur standout from Sheffield to get the job done down the stretch.

Elsewhere the Leeds United fan from New South Wales Ebanie Bridges will box in the city for the second time running, this time against María Cecilia Román. The 35-year-old went the eight-round distance against Mailys Gangloff on the Lara-Warrington undercard at Headingley but will face a sterner test in her experienced Argentinian opponent this weekend.

But, at 39 and after nearly 11 years as a professional, it is unclear how much Román has left in the tank. Bridges, meanwhile, is rarely in a dull fight so these could be 10 twos of action although the visitor might know too much to give up her IBF bantamweight belt.

Following her successful debut earlier this month, Bridges’ compatriot Skye Nicolson will also feature lower on the card while there are run outs for Yorkshiremen Hopey Price, Mali Wright and Cory O’Regan. Calum French, of Gateshead, will also box for the first time since his successful six-round December debut.

The Verdict Expect Leeds to be rocking for as long as this lasts.