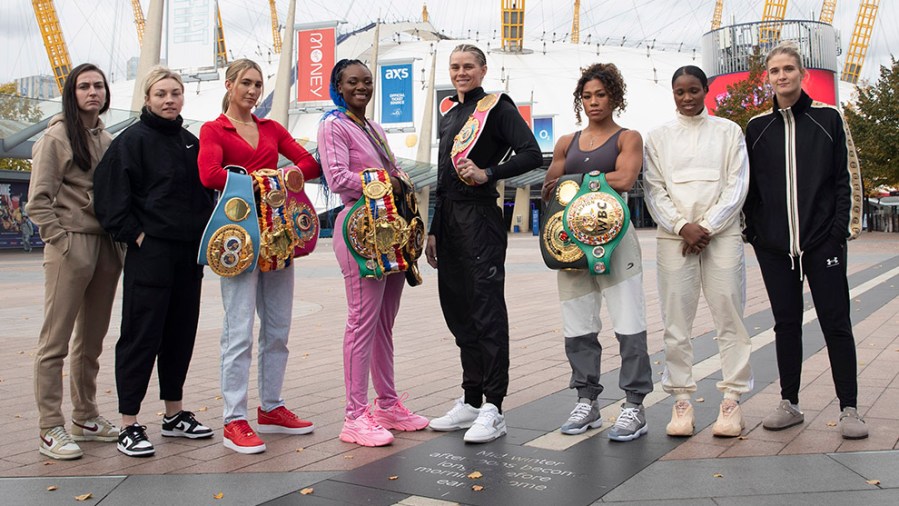 The first fight has been won, with the scales. Now it is almost time for the real thing at an 02 we are told is all but sold out.

Savannah Marshall and Claressa Shields were identical weights for their undisputed world middleweight title showdown, as were the bitter rivals for the super-featherweight scrap, Mikaela Mayer and Alycia Baumgardner.

The Americans provided the fireworks at the ceremony at the Genesis Cinema in Bethnal Green, having to be separated at the end of the staredown pictures for the second time in 24 hours.

Mayer, the IBF and WBO holder, aimed a kick with her bare right peg after appearing to be nudged by ‘The Bomb’.

It is hard to imagine, but this could steal the show on Saturday night.

“I’m here to take over and dethrone her,” said Ohio 28-year-old Baumgardner, who tipped the scales at 9st 3lb 5oz before declaring a stoppage triumph.

“My only option is to get her out of there, whether the referee stops it or the towel comes in.”

Mayer is supremely confident her skills will prevail.

“She’ll have to knock me out, she knows that, that’s the only way she can win,” said the 32-year-old from LA.

“She’s not got my work-rate, she’s not more accurate than me, I’m going to outbox her. She’s never been in with a boxer like me before.”

While Mayer predicted precision, Shields has promised extreme violence when she renews battle with Marshall, 10 and a half years after they met at the 2012 World Championships, where the Hartlepool boxer triumphed.

The GWOAT, responding to a few comments from the audience, did let rip with a verbal volley at Marshall’s fans, repeating “you’ll be crying tomorrow” and chanted “U-S-A” before departing the scene.

But before she did go, not so quietly, she had only one thing on her mind, a third KO victory.

“Everyone talks about her punching power, it’ll mean nothing tomorrow.”

Marshall was not quite in ‘Silent Assassin’ mode but cut a laidback figure, saying little, and smiling her way through proceedings, before taking time to relax with parents, Christine and John.

“I made the weight easy, I always do, I feel good. Savannah Marshall will win,” said the 31-year-old.

“The support I’ve had has been amazing, it means the world to me.”

The world now awaits on Saturday night at the 02.