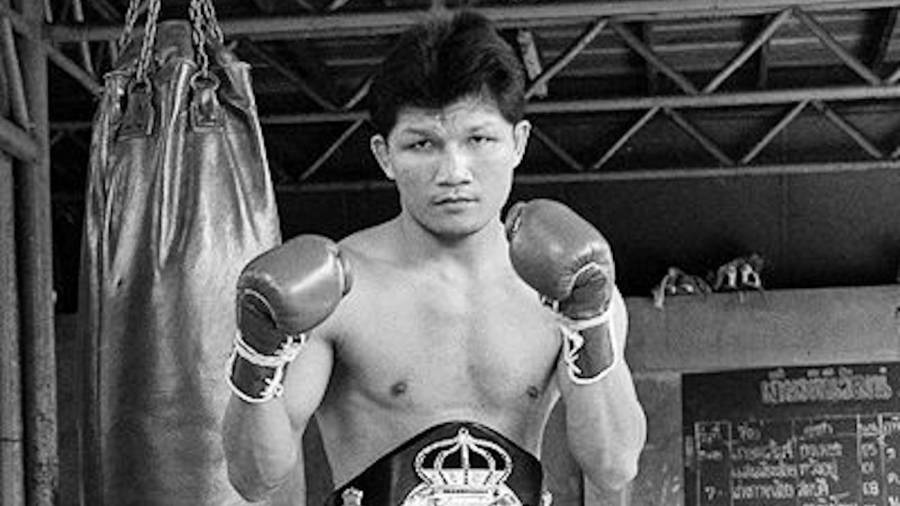 Khaosai Galaxy was a wrecking ball at his peak, every bit as dangerous as ‘Iron’ Mike albeit substantially smaller. He tells Phil Rogers about his life and career

WREATHED in a fog of cigarette smoke and boisterous agitation stood a 25-year-old Thai fighter on the brink, left fist cocked as he stalked his prey. The previous round had seen him drop his Dominican opponent, Eusebio Espinal, with a trademark uppercut to the body, and now the assembled throng in deepest Bangkok were becoming apoplectic, willing their beloved countryman on to finish the job. When the moment arrived it was delivered with aplomb, the air crackling as punches whipped in to the liver and solar plexus. He had delivered on his promise. Khaosai Galaxy had become a world champion.

“It was the best ever feeling, overwhelming,” he tells Boxing News. “I was so proud of myself. I thought of my mother, there were tears all over my face. My mother passed away eight years before I became champion. I wanted to shout out loud, ‘Mum, I have done it!’ But I was not excited and was not surprised about the fight. I believed in my punching power. I was really confident.”

Now 62 years old, Galaxy is a far less unnerving figure, his garish floral shirts, genial grin and immaculately slicked-back hair belying a ferocity that earned him the nickname ‘Sai Thaluang-Si’, literally translated as ‘The Left Hand That Drills Intestines.’ Born and raised in the northern province of Petchaboon with his twin brother, Kaokor (an exceptional bantamweight champion in his own right), and four other siblings, Galaxy sees himself and his legacy as a product of his mother’s unending drive to mould her twins into successful fighters.

“I dreamt of being a well-known champion in Muay Thai. However, it was beyond my dreams that I would become a boxing world champion. To be honest, my mum had a very great impact on my boxing career. She wanted me and my twin brother to be boxers. She was very fond of Muay Thai and really pushed me quite hard to start to fight since I was five years old, giving me a set of plastic boxing gloves to play with my twin brother. She woke me up every day at 4am to run and practice Muay Thai before going to school. At that time I practiced by myself without any coaches and started to join competitions at the age of thirteen. At fourteen years old she sent me and my twin brother out to join a professional Muay Thai camp to stay full board. I joined competitions and gained experience from many competitions throughout the country, boxing to make a living money and boxing to make my name “Daoden Muang Sri Thep” (my Muay Thai given name) known. Then I moved to Bangkok at the age of seventeen to join the Galaxy Muay Thai camp, managed by my promoter, Mr Niwat.”

Taking the name ‘Galaxy’ from a local nightclub, his Muay Thai career quickly gathered pace and with his natural gifts evident to all, he gave little thought to the idea of making a switch to the noble art. Yet in a twist of fate, one seemingly uneventful afternoon an opportunity arose to fill a void on a random undercard. The rest, as they say, is history.

“It began on one of the Muay Thai competition events that I was in at the Ratchadamnern boxing stadium (Bangkok). I was there just to cheer on my boxing friend. I was not scheduled to fight on that day! An incident happened and the opponent of a boxer called Pook Sritam did not turn up to the event. Mr Niwat then chose me to replace the missing opponent. Fortunately I knocked him out in the fourth round. I shined and my boxing career had begun.”

Boxing had discovered Khaosai Galaxy and a love affair had begun. Over the next three years he began to master his trade, grinding away on obscure undercards in front of sparse gatherings of chain-smoking bookies and curious tourists. His style was raw, his approach crude, but the power he carried in that hellacious left hand was immediately evident.

“In the early days my style was as a fighter, move ahead and not move backwards. After a while I gained more and more technique, learning to box more. But by the end my style was still as a fighter because I was very confident in my punching power, which I always believed would work, that I’d knock out opponents. It’s natural power. I believe it is my talent. It’s not genetic, no one in my family has the same as mine. I cannot maximise my punching power by practicing. Practice gave me more strength and more durability and gave me more punching speed.”

Learning on the job didn’t go entirely to plan, however. Blasting out a series of hapless opponents may have provoked interest, but outside of the ring Galaxy was far from focused. A points defeat to an inferior prospect in Sakda Saksuree left the entire Galaxy team shocked, yet the response it generated in the young brawler would prove to be the making of him and, in turn, create history. It would be the only defeat of his career.

Galaxy was as good as his word. Eighteen victories followed, 16 by way of knockout, before his famous obliteration of Eusebio Espinal earned him the WBA super-flyweight belt. The unpolished wrecking ball’s newfound dedication had transformed his arsenal and he began obsessively moulding himself into a devastatingly effective pressure fighter. But what followed was even more extraordinary. Galaxy went on a run of 19 world title defences, 16 inside the distance.

“I scheduled myself to train more and more, to study each opponent’s styles, and to be well prepared for each competition. I did not make it a target to make 19 defences, I only thought to keep doing it and make each fight better and better. Honestly, it was a big pressure. It was as if I had a duty to win every fight. I didn’t do it for myself but I had to win for my audience, for the Thai people. I was happy to give this moment in my life to make many people happy.”

Boxing’s hardcore fans began to refer to Galaxy as “the Thai Tyson” as he advanced on his absurd run of knockouts, his reputation buoyed significantly by his brother, Kaokor, winning the WBA bantamweight title to make them the only twins to ever become world belt-holders. Yet, without a significant fight in the US, devotion to his career remained at ‘cult hero’ status. Galaxy did make it out of Thailand to box in Curaçao, Indonesia, South Korea, and Japan, but the huge crowds and $100,000 fight purses in his homeland made straying elsewhere a less tantalising prospect. The decision certainly made his profile less visible to the boxing public but it’s a decision Galaxy has no regrets over.

“I understood that at that time junior bantamweight, or currently super-flyweight, was not as commercial as other higher weights. I never feel frustrated about this. They [my opponents] were all some of the best boxers around. I was very lucky to have the opportunity to compete with them and develop my skills from fighting them.”

In 1991. Galaxy announced his retirement from boxing immediately after his 19th and final title defence, a rare points win over Armando Castro. Short-lived spells in film, music, and politics, and all manner of different business ventures, from snooker clubs to restaurants, followed.

Eventually, though, the lure of prizefighting proved too tempting, albeit now behind the microphone as a commentator for Thai TV or supervising at his brand new gym in Bangkok. This is where he remains settled today, looking back on his own remarkable story with a sense of profound contentment.

“I had the best life. I think I got full respect. I am so proud that my name is hung on the wall in the International Boxing Hall Of Fame in New York, USA.”

FIVE OF THE BEST
Galaxy names his finest wins

Israel Contreras
In a rare sortie outside of his homeland Galaxy travelled to Willemstad, Curaçao, to face the unbeaten Contreras. The Venezuelan had some success, stinging Galaxy with right uppercuts before the Thai took control, pummelling his opponent into submission with trademark lefts to the body in the fifth round. Contreras would go onto shock the great Wilfredo Vázquez by way of a first-round KO, adding extra kudos to this victory for Galaxy.

David Griman
In the penultimate fight of his career Galaxy took on another unbeaten Venezuelan, this time on a crocodile farm in his native Thailand. It was vintage Galaxy in his 18th title defence, with the Thai switching brilliantly from body to head and landing clean left hooks to the chin. The punishment dished out culminated in 14 unanswered punches in the fifth round to give the champion his forty-first and final KO victory.

Yong-Kang Kim
If ever a fight displayed Galaxy’s suffocating style and brutal left hand, it was this one. The Korean, Yong Kang Kim, showed immense bravery to survive for so long but was ultimately dominated by the champion in his 15th title defence, dropping to his knees in the sixth round after a series of clubbing shots to the head that struggled to miss all night.

Rafael Orono
Orono really played his part in an excellent battle over five rounds, the former world champion using his size, reach and long looping right hand to keep Galaxy at bay. Yet the Thai wrecking ball just kept coming forward, dropping the Venezuelan several times before spinning him 180 degrees with a straight left to the chin to leave a raucous home crowd euphoric.

Ellyas Pica
Pica was a national hero at the time of this fight, having taken the IBF belt from Chun Ju-Do to become Indonesia’s first-ever world champion. This was one of Thai’s rare fights in an opponent’s backyard and over 14 rounds in Jakarta the two engaged in a gruelling contest, Galaxy eventually pinning Pica in the corner and pummelling him into submission. Though the IBF strap wasn’t on the line, this was a huge fight for the division and confirmed Khaosai Galaxy’s status as the super-flyweight king.