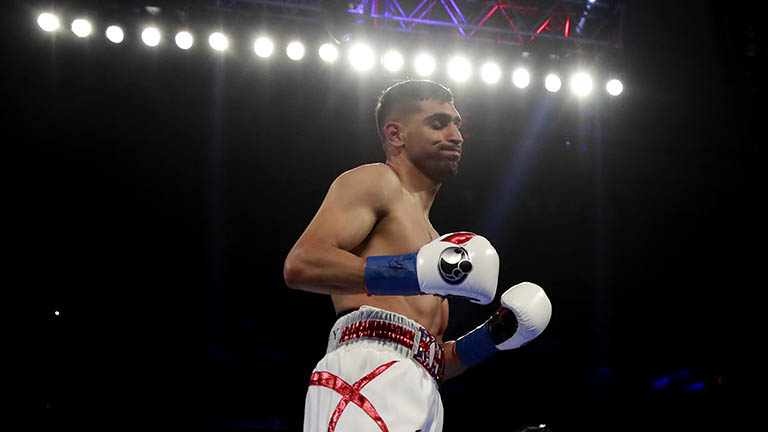 IN boxing, sometimes a fight takes place only because the hope is that it will lead to something greater down the line. Certainly, when assessing the virtues of Amir Khan’s fight against Billy Dib this Friday (July 12) in Saudi Arabia, there can be no better example of this.

Rather than Dib, the immediate challenge, Khan seemingly only has eyes for Manny Pacquiao, a former gym mate he hopes to meet in a money-spinning fight in the Middle East either this year or next. That’s the one he really wants, the one he has always wanted, and the primary the reason behind attempting to crack Saudi Arabia.

Even Billy Dib’s team know and accept it.

“You know what they’re planning, right? Pacquiao,” said Nettles Nasser, one of the men who will corner Dib on Friday. “That’s big time right there. If the money is right, Pacquiao will come here, no problem. Saudi Arabia is Saudi Arabia. If they want something, they will get it.

“The Saudi people have accepted boxing now. The people in charge are really making great changes and taking sport in the right direction. They call Madison Square Garden the ‘Mecca of Boxing’, but I truly believe the new ‘Mecca of Boxing’ could be here one day.”

Nasser is arguably the most prominent boxing trainer working in Saudi Arabia right now. He operates out of the Challenge Zone in Ar Rawdah, Jeddah, but, prior to coaching in the Middle East, spent his formative years in Paterson, New Jersey, where he trained Omar Sheika, George Khalid Jones, Kabary Salem, Henry Crawford and Jerson Ravelo.

This Friday, Nasser will be in the corner of Dib, having been personally asked by the 33-year-old following a series of training sessions a fortnight ago. Yet even Nasser, a straight talker who has seen it all in boxing, questions the thought process behind putting Dib and Khan together at this point in their respective careers.

“I’m disappointed,” he told Boxing News. “Although they’re doing a big fight here, I just think the matchup, on paper, is ludicrous.

“Billy Dib’s a former featherweight champion of the world and a very good fighter but has to go all the way up to welterweight (to fight Khan) and that’s a big, big difference in size. Also, he hasn’t been too active recently and has already retired once.”

Before agreeing to corner Dib, 45-5 (26), Nettles wanted to understand the Australian’s motivation for accepting the fight against Khan given the weight discrepancy and short notice (following the withdrawal of original Khan opponent Neeraj Goyat). Though sceptical, he received the answer he was hoping for.

“I worked with him the first day and I talked to him,” said Nasser. “I told him I wasn’t going to embarrass myself in the corner. But the way he is talking he’s going to give it his all and put up a fight.

“At his best, Billy is a very capable fighter, and you just never know in this boxing game. Look at what happened with (Anthony) Joshua and (Andy) Ruiz in New York. Upsets happen.”

Nettles boasts a small stable of Saudi boxers, which includes 19-year-old amateur Ahmed Monshi, a three-time national champion who once lived in England, and pro Abdulfatah Julaidan, who is scheduled fight on Friday’s card in Jeddah.

Julaidan, 3-1 (2), is a 39-year-old with limited experience but plenty of determination whose story typifies the Saudi boxing movement. Last September, he became the first Saudi Arabian boxer to compete in a professional bout in the Kingdom and his coach describes him as a “pioneer”.

“When I came here there was no boxing at all,” Nasser explained. “I had a couple of kids in the gym, but they were like fans who want to be fighters.

“I saw Abdulfatah Julaidan struggling in a sparring session and told him, ‘You can be a lot better than that.’ We went away, he trained two hours in the morning and two hours in the evening every day, and we came back and sparred the same people. This time he beat them up. Then he turned pro.

“He works hard and has courage. He’s 39 years old but has followed his dream. This is fairytale stuff. It takes a lot of balls to do what he did with no experience.

“He’s inspiring young people in Saudi Arabia to box. Saudi Arabia traditionally only has eyes for soccer, but they must have other sports. We can help make that change happen.

“They had the World Boxing Super Series here (last September), which was big. People loved that. They had Evander Holyfield, ‘Prince’ Naseem Hamed and Muhammad Ali’s daughter (Laila) here. They had some big names to attract attention.”

For as long as Amir Khan, 32, remains a big name in boxing, he will attract interested opponents, promoters and investors. He will also continue being linked with big fights in the Middle East – fights bigger and better than his upcoming one against Dib – and continue being mentioned in the same breath as Manny Pacquiao.

“The biggest heroes for Arabs and Muslims are Muhammad Ali, ‘Prince’ Naseem Hamed and Mike Tyson,” said Nasser. “Khan, by doing this and beating Manny Pacquiao, could put his name up there with those guys.

“Whatever happens, you’ve got to give Khan his respect. He’s a two-time world champion and a silver medallist at the Olympics. Those three things – two world titles and an Olympic medal – are very prestigious.”

Right or wrong, one senses Khan, 33-5 (20), will garner a greater deal of respect in Saudi Arabia than he might in his native England or America right now. More money, too. And that’s presumably the whole point.