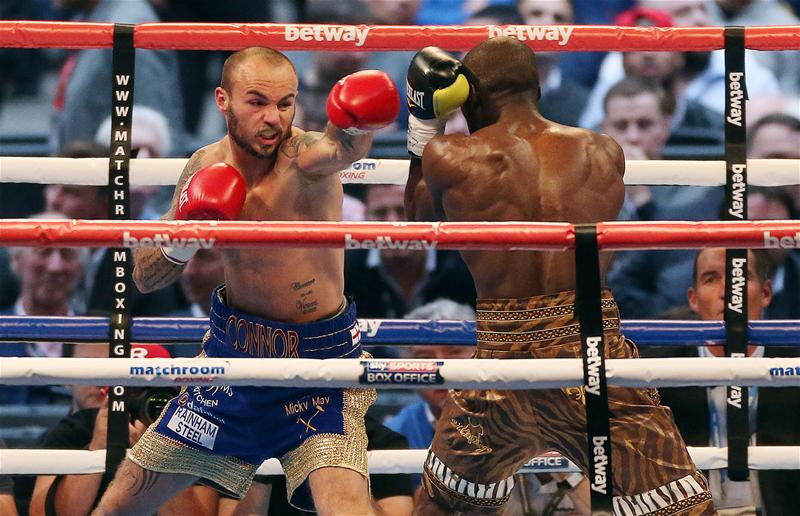 Kevin Mitchell was never a prime candidate for a happy ending, but Matt Christie discovers a man thriving in retirement

KEVIN MITCHELL retired February this year when he realised he just didn’t have it anymore following a five-round loss to Ismael Barroso. One of the most gifted talents of his generation, Mitchell came close to unseating brilliant world lightweight boss Jorge Linares in 2014 in perhaps his finest hour, but too much time in East End boozers hindered his earlier career – he infamously came in woefully unprepared for an Interim WBO title fight with Michael Katsidis in 2010. In fact, his love of partying did not bode well for retirement, but Mitchell is now focused only on the future and, under the watchful eye of his ex-coach and saviour Tony Sims, is in the final stages of being approved for a trainers licence from the British Boxing Board of Control.

It’s going really well to be honest, and it all stems back to Tony Sims from about two years ago. Before that, after my fights I’d always go on the p**s and go on the wonky one. Tony stopped that, because I knew I’d have to be in the gym early the next morning to help him out [with training fighters].

He didn’t actually tell me to stop doing anything, but looking back now, that’s why he was asking me to help him out in the gym.

I never thought I wanted to be a trainer, and then I started helping the fighters out. When you’ve been a fighter you know what they’re going through, you can teach the kids. I was enjoying it and it’s just gone from there really. It’s going good, and I’m happy again.

Is that part of the reason you retired when you did, because you knew you had a career in training to go onto?

Training-wise, I still had the hunger there. Even though I didn’t win that world title,
the hunger was still there to do well in the sport. There’s things I’d been through as a fighter, I’d been on the drink, been out partying loads, and I can teach the kids where they’re going wrong and where they’re going right. I can speak through experience and I think that’s pretty good.

Has all that partying and drinking stopped now?

Fighters who enjoyed the kind of career and popularity that you did find it hard to then retire. Can you relate to that? Has there been an itch to come back since you retired in February?

I haven’t found it difficult at all, I’m really enjoying myself now. I’m happy now and my goals are set in my head, the next things I need to achieve. I want to be like Tony Sims was to me, I want to be someone who looks after the fighters, like Tony looked after me. I want to protect fighters.

I’m just really happy with what I’m doing and it’s nice to be able to help people. There is a part of me that wishes I was with Tony Sims from day one, but if I hadn’t have done what I’d done, I wouldn’t be the person I am now, and I wouldn’t be in the position I’m in to help fighters. You can’t beat helping people.

You see a young fighter in his early 20s going off the rails. What do you say to them?

Keep out the pubs, stop chasing the girls. The party that you’re looking for, what you think you’re chasing, just don’t exist. You’re better off having a good time with your close friends and family rather than going out every weekend. And that’s what happens, they get known, they get recognised in clubs and bars, get recognised by girls, and you want more and more and more. But it’s all a load of old cobblers, it don’t mean nothing. If I had a fighter I could see was doing that I’d tell them to stop messing around and get their head back on the game. But it is different now. My era had the Ricky Hattons and the Joe Calzaghes, and we’d all party and booze after our fights, but the athletes now, they live it, and that’s the best way to be.

The problems you mention about going out come from personal experience. What was the worst period for you? Surrounding the Michael Katsidis fight [May 2010 – l rsf 3]?

I should never have been allowed in the ring. It was what it was though, I can’t change it now. Of course I look back on that and I think if I’d have had Tony around me I’d have been one of the best lightweights out there, there would have been no stopping me. But things happen for a reason, and I really believe that. Before the Katsidis fight, I was splitting up with the missus, I had a drink problem, I weren’t training properly, I weren’t dieting properly, but in my head I was thinking I could still go out and fight in front of 30,000 people against Michael. I’m friends with Michael now, and how he lived and how he trained was how it should be. But to be fair
I should have been advised not to fight, I should have been told to have a break for six months – I was all over the place.

But it seemed like you were back on track in your next fight – beating John Murray in eight rounds the following year?

I had 15 months out of the ring before that fight and I didn’t do nothing. I hadn’t touched a pair of boxing gloves. I went on the p**s for nine months solid, I blew 180 grand in nine months, I did all my money, I was in a bad place and I was very depressed. I understand what Tyson Fury is going through – there’s a lot of depression in boxing and people don’t see it. I was in doom and gloom and I knew I had to get myself out of the pub and get my career back on track. I did it in the end, I got myself back. But those West Ham days, they were the worst days, definitely.

Speaking of Fury, you two go quite a long way back to your amateur days don’t you?

He’s younger than me and we weren’t best friends or anything, but I knew him, yeah. What he did against [Wladimir] Klitschko… Look, if I gave you a million quid and said you’ve got to put it on Tyson or Klitschko, you’d have put it on Klitschko [to win]. I would have done. But Tyson won. I don’t think he’s been able to deal with the pressures of being world heavyweight champion – he won’t say that, he reacts how he reacts, but definitely it’s been a big pressure for him. He’s gone out, he’s drunk too much, he’s took drugs and things. He didn’t even realise he was depressed, he couldn’t even [immediately] admit to his depression. We need to get behind him, we should be really happy we’ve got a heavyweight champion.

Are you optimistic that he will see the light at the end of the tunnel and he’ll fight again?

He’ll pull it back. I was a full-blown alcoholic, I was living in pubs all my life, and I still fought for two world titles. If I can do it, I’m pretty sure Tyson Fury can do it. We should be proud of him. Look at British boxing, it’s on the biggest boom. When I was a kid there were people like Chris Eubank, Nigel Benn, Frank Bruno, they were my heroes, Spencer Oliver, he was one of my heroes, and boxing is bigger now than it was then. The kids now are looking up to these guys and putting a pair of gloves on because of these guys – we should get behind our champions more.

You mention those names there but you were an inspiration too. How does that feel to have had such a positive impact, even to people you don’t know?

It’s mad. It’s nice to know I’ve been an inspiration to fighters, to know I was the reason they started boxing. Now I can teach and coach the fighters too, I can give an insight, it’s good, it’s good. I can steer them right, there’s loads of things I can do for fighters.

Retirement can be the point where fighters lose their way. It seems to be having the opposite effect on you.

I’ve lost my way before and I’ll never do it again. I’ve done the crazy ones before, it will never happen to me again.

Finally, if you could offer one piece of advice to young aspiring fighters, what would it be?

Live clean, train like a freak, and by that I mean train harder than the rest, and enjoy it because it goes so quick.

I had 13 years as a professional, it went so fast, now here I am, sitting on my bed in my training kit, taking an interview after training fighters. Enjoy it while it’s there and relax through the stress.