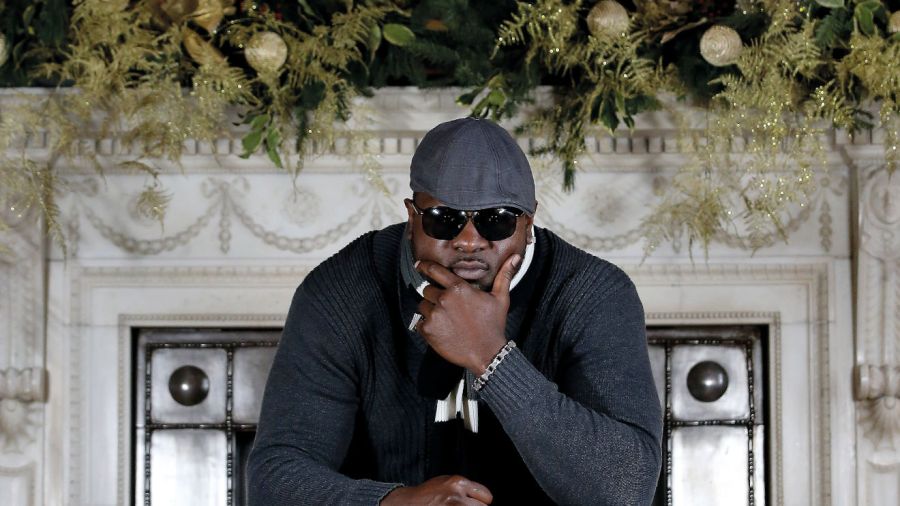 Kevin Johnson became a contender under the watchful eye of Larry Holmes long before he became the gatekeeper he remains today. But not everyone is allowed through, as Yoan Pablo Hernandez discovered. Pete Carvill spoke to one of the most colourful characters in boxing

KEVIN JOHNSON knew the day before how it would go. “I’m going to knock him out in the late rounds,” he tells Boxing News with a cackle from his hotel in Magdeburg. “It’s going to be my welcome gift to the heavyweight division. I’ve fought the best punchers in the world and then they put a cruiserweight in front of me? That’s disrespectful.”

It had been fewer than two months since he had lost to Mariusz Wach. Now he was facing former IBF cruiserweight champion Yoan Pablo Hernandez.

Johnson had been in Gelsenkirchen, Germany, for all of 2020. “I’ve been here since last year,” he explains. “I’ve been coming over to Germany for three or four months at a time for the last four-to-five years, but I’m stuck here because of the pandemic. I love Gelsenkirchen, though; it reminds me of Asbury Park.”

Most of Johnson’s life is spent on the road. The way he tells it, he has fingers in many pies across the world. The simple question of where he lives is posed but the answer is not quite so.

“I can’t really answer that,” he says. “I have a business in Bogota, Colombia, and another in Santiago, Chile. Then there’s another in the Dominican Republic that I was getting off the ground before the coronavirus started, and I import and export tyres here in Germany. Usually, I’m in the US for a couple of weeks, then the Dominican Republic for a month, then Colombia, then Germany. Where I live is where my bag stays the longest.”

He is not known for punching power. Kevin Johnson was known initially as a boxer. Now the go-to educator of young heavyweights, Johnson the boxer became Johnson the spoiler, the survivor. He has tricks in his arsenal to teach and confound the young guys with. He jabs, he defends, he covers up. It helps that his arms are so long that it seems he could scratch either knee without needing to bend.

Johnson, then, is a gatekeeper for the heavyweight division, bobbing away at his own unique level of expertise. Beat him, and you add a name to your record and some seasoning to your skills. Lose, and well, your future is called into serious question.

It took a long and uneven time to get here. Johnson’s teenage years may not have been troubled, but he was. Before the age of 20, he had been in serious legal trouble twice. A meeting one day would alter the trajectory he was on.

“I got home from eighteen months in prison,” he says, “and was lost. I was out there on the blocks, selling drugs, because I didn’t know any better. A green Ford Expedition pulls up one day and it’s Daryl Dawkins, first man to break a backboard in the NBA. We go to eat, and he calls Larry Holmes, who tells him to bring me over.”

Johnson continues: “I go to Larry’s gym and I box with his brother Mark, who’s a mixture of Larry and James Toney. Larry says, ‘Let’s keep this kid here.’ So I trained there every day and Larry took me under his wing.”

The jab was always there, he says, but Holmes refined it. “He told me that it was so good that I should never throw a body shot. I was to work the left hand, then throw the right over the top to get them out of there. He’d go mad when I threw bodyshots.”

After beginning his career in Easton under Holmes’s guidance, Johnson had 22 wins and a draw when he got the call of his career: A match for the WBC title against Vitali Klitschko in Switzerland. Klitschko’s 10 previous wins had been by stoppage. Many thought Johnson would be the 11th.

Johnson neither won nor came close to doing so, losing by scores of 120-108, 119-109, and 119-109. But he went the distance, he showboated and goaded Klitschko in the final rounds and exhibited the survival instincts that would come to define him.

“The guy couldn’t hit me,” he said. “I thought I’d do what Lennox Lewis did and bust him up. His eye opened in the fourth and I tried to work it…” He trails off, blaming an injury for the loss. “It’s not that I didn’t want to. I just couldn’t.”

He won four against opponents of mixed ability, and then lost in a Prizefighter final. He dropped an eliminator to Tyson Fury straight after, won one more, and then lost three on points. Anthony Joshua made a statement by stopping him in two.

From then on, it was mostly losses, 10 of them, with five wins smattered in-between. The biggest on his record was Francesco Pianeta whom he stopped nearly three years ago. But the losses began to climb and he was often on the road — Bulgaria, Poland, Russia, Germany.

He was someone that promoters rely on for name value and as a test for prospects. He became, as Steve Bunce once wrote, “…the custodian of the ancient art of journeyman boxing, the ghost of the great men that taught the finest heavyweights in history how to be real boxers.”

It is out of love that he fights on at nearly 41, he says. It’s something you hear a lot from those who may have gotten everything from a sport that they ever will.

“I love three things in this world,” Johnson says. “They’re my boxing, my real estate, and my family. You don’t shake love. Fighting bums is nothing, but I just love fighting the best of the best. When God tells me to hang them up, I will. But he hasn’t told me that yet so I’m still here.”

His latest opponent had defected from Cuba to Germany, built up a 29-1 (14) record between 2005 and 2014, won the IBF cruiserweight title, and then defended it four times before retiring. Hernandez was testing the waters at heavyweight with a fight against Johnson. He would enter the periphery of the division with a win. Hernandez is tall, at 6’4”, for a cruiserweight, but the jump between divisions has always been a difficult one. After Evander Holyfield, who did it with some ease and success, there is a long and sad list of those did not. Hernandez had been tall and angular in the lower division and, like Johnson, he was known primarily as one who moved well but not for his power. Even so, he was widely expected to defeat the ageing Johnson.

The heat that had swept across Germany for weeks was finally started to break. The fight was held at the open-air Seebuehne [on August 22] and the cool breeze from across the lake drifted into the arena.

Johnson came into the ring and waited, his face stern. The crowd booed. He looked in great shape, and his body was flat and solid, and he looked fitter than in some earlier, more high-profile fights. But he looked dry, as if he had come to the ring without building up a sweat.

The first round began and Johnson tucked up, his left hand low, his shoulders high, his right glove to his chin. He shuffled towards Hernandez and deflected jabs. But while there was little that got through, and he covered up well, occasional looping lefts from Hernandez penetrated. And while they were few and most were blocked, this was still Germany, and they would be scored against him.

Hernandez went over for the first time in the second, a slip. He got up and moved, and tried to stay away, step to the outside, and throw the cross. It was a good strategy that should have worked well. There was a fear that the would become one between a man who knew the moves and one who could only remember them.

There was little in the third, apart from Hernandez’s movement and Johnson’s barging into him, but things began to change in the fourth. Hernandez went down twice, legitimately the second time and when he got up, things had shifted.

Somehow, there was a cut above Johnson’s eye. It seemed to be on the eyelid, the doctor was called in, and Johnson went into the next round with a glob of grease on it that Hernandez would aim hooks at. It was hard not to root for Johnson at this point; he was on foreign soil, at least nominally, and winning when he had been slated to lose. But the cut threatened to change things.

In the sixth, Hernandez faltered again, and he went into a corner where Johnson swung at him, and he bent and dipped, and then they moved off again.

A left hook finished it in the seventh, and Hernandez went to the floor, where he lay face-down as if scrutinising the canvas for a lost contact lens. The referee began to count, and it seemed to stretch out into minutes. You thought that maybe it would be long and Hernandez would get up and continue. But he did not, and so it was waved off and no one took that seriously at first, because we all expected him to get back up. Everyone except Johnson, who had made his prediction. And in this, he was right.

Johnson went down on his own knees in a corner. He had beaten Hernandez, and fairly. A cruiserweight’s ambitions had been leached. Johnson had never been regarded as a powerful puncher amongst the heavyweights, but he was still a heavyweight. Hernandez was not.

Johnson was bullish a few days after the fight. Over the phone, he relived the bout. “It was just a waiting game,” he said. “It was different to other fights because he’s a southpaw and I couldn’t use the jab. But you hang in there and take the punishment while you wait for the opportunity. I got cut, but you can’t fall apart when that happens. We lost a couple of rounds, but you give those things up before you explode. And when I do, I do.”

He claimed that there had been a barrage of emails in those few days, and that he was assessing all the options. Retirement had been on his mind and, in a way, it still was. “I’m going to hang the gloves up,” he said, “before my body hangs up on me. Some people do that at the point when things start to go, but I’ve still got everything. I’m not going to hang around because that’s when you get hurt. All the people that got hurt got hurt later in their careers.”