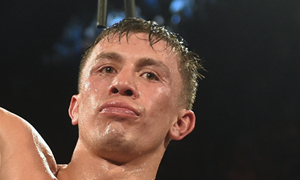 I HAD to listen to the message from Eddie Hearn twice on my phone, I couldn’t believe that I might be fighting “GGG”. At last. I had been shouting from the mountains that I wanted a big fight. All these welterweights are running away from me, and there were no big fights coming. Even the fighters that were talking about fighting me were pricing themselves out with how much money they wanted. It had become almost impossible.

I’d looked at Golovkin before, I’d seen Canelo Alvarez give his title up rather than face him, I’d seen other middleweights run away. When I was offered the fight, I started running towards him. I want that fight, and I’ve grabbed it with both hands. I got the deal done. There is nothing bigger or better in world boxing at the moment – you have the best welterweight in the world stepping up two weight divisions to face the most feared man in boxing.

The difference between me and guys like Alvarez and Chris Eubank is I’ve got the power, I’ve got the determination, and I’ve got the belief. When I say I want the fight, I want the fight. I put pen to paper and I sign. I’m going to get in there and give it to Golovkin like nothing he’s experienced before. I am going to show the world that I am a naturally big guy and I can stand with these guys, and more than hold my own. This was all written in the stars for me to fight this kid, and for me to shock the world.

Obviously it’s a high-risk fight because I’m fighting a much bigger guy, but I am big myself and on the night there won’t be nothing between my size and Golovkin’s size. I have never boxed at middleweight, but I’m a monster in the gym when I’m a middleweight, and then I have to come down in weight to make 147lbs. I will be a different animal – I will have more energy, more power, and more resilience.

There is no catchweight because he is the middleweight champion, that’s where he won his belts, and they’re what he’s putting on the line. Middleweight is 160lbs, and that’s what we’ll be coming in at. You’ll see an animal on the night, one who is fully hydrated, a wrecking machine.

Amir Khan said he was “100 per cent” behind me, but in the next breath he said, “Just don’t pull out”, making out I would make up some excuse and pull out closer to the fight. Basically Khan is a joke to me. I’ve heard that as a person he’s not a bad kid, he’s nice guy, but when we’re talking business, we’re talking fighting, I’ve got to wash my hands with him because he drives me crazy. I’m fighting the most feared man on the planet, and I don’t know what Khan’s latest excuses are for not fighting me before this, but it’s just pathetic. As fighters we want to be involved in the best fights that we can be while we’re in the sport, and this fight against Golovkin shows exactly what I’m about. I’m giving the fans what they want because they pay our wages, I want to give them the best fights I can.

Khan struggled at middleweight, the size was too much, but Amir Khan is no Kell Brook. He’s not the “Special One”. I’m looking forward to feeling Golovkin’s power, I’ve heard a lot about it, I want to see what all the fuss is about. You will see at press conferences before, at the weigh-in, and on fight night, that I am a big, big welterweight. People will be in shock when they see what happens.

This is not necessarily the end of my days at welterweight. Wherever the opportunities are from now on, I will take them. I will go up, down, left, right. Wherever those fights are, wherever the bag of money is, I’m there to fight. The thing about me is, I’m a prizefighter, I’m going in to fight, and to win.