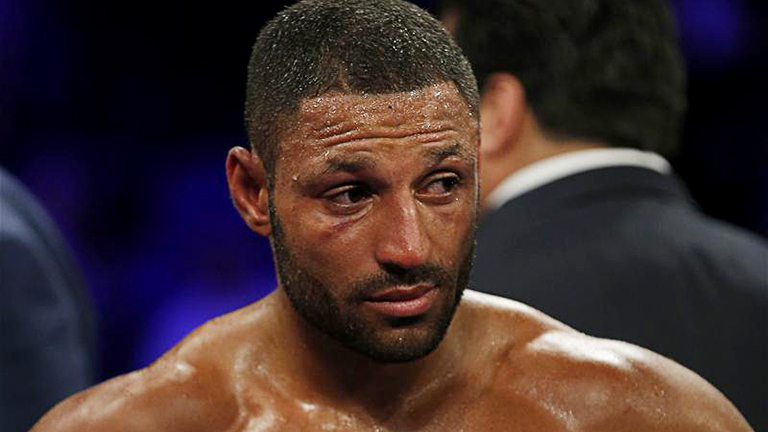 Kell Brook is looking at Khan, Canelo, Cotto and Pacquiao

KELL BROOK will be back in the gym next week after undergoing surgery on the broken eye socket he suffered during his valiant losing effort against Gennady Golovkin on September 10.

Brook, the IBF welterweight world champion, jumped two weight classes to challenge the WBA, WBC and IBF middleweight king and held his own before being stopped in the fifth when his trainer, Dominic Ingle, rightfully threw in the towel.

His injury was revealed after the fight and Brook has since had a successful operation on it, and Ingle revealed that the Sheffield star won’t be out of the ring for too long.

“He had surgery last Friday and everything went fine,” he told Boxing News.

“He was in the gym the other day seeing some of the lads, there’s still a bit of swelling around the eye but he’s absolutely fine now.

“The doctor’s given him about three or four months until he can fight again, so Kell will be back in the gym next week, ticking over until Christmas and then we can see what Eddie [Hearn, his promoter] says and go from there.

“Obviously he won’t be able to spar right away so it’ll mainly be strength and fitness work, getting him back into proper shape. He’ll have his check-ups and everything as well during that time.”

Despite his disadvantages in size, Brook was able to stop the Kazakh wrecking ball in his tracks at several points during their fight at the O2 Arena in London.

As such, despite suffering his first professional loss, Brook’s stock has soared and he is keen to pursue more big fights upon his return. However it is not yet clear which weight class he will box in going forward, as making 147lbs was always a huge struggle for him and having recently boxed at 160, it will be even more arduous.

“It could actually be January or February he’s back in the ring, if the fights he wants are there,” Ingle continued.

“It won’t be meaningless fights, you’ve got Amir Khan, [Miguel] Cotto, [Canelo] Alvarez and even Manny Pacquiao – or [Floyd] Mayweather if he comes out of retirement.

“The Golovkin fight, it showed that maybe middleweight was a step too far, but Kell proved he belongs at that level and that he can be in the big fights at the lower weights.”

Sadly, Ingle’s decision to save Brook from further punishment in the Golovkin fight was met with criticism from some sections of the public.

After the fight Golovkin claimed none of Brook’s punches hurt him and that Kell was simply “too small.” However Ingle refutes that and remains convinced that his man put a dent in ‘GGG’.

He said: “Kell was prepared to fight on, it was my decision [to pull him out]. Kell said to me that he could feel some of the power coming out of Golovkin’s shots as the rounds went on.

“They can have their bravado but you know when you’ve hurt someone, and we hurt him. Kell’s in good spirits though.”