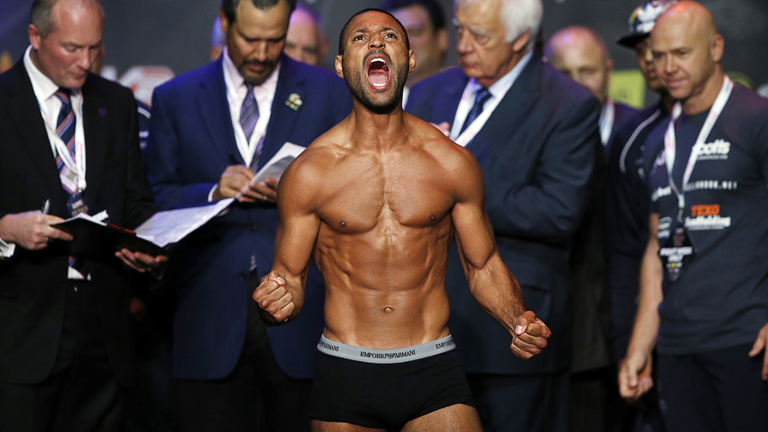 Having stared death in the face, Kell Brook seems unfazed at the prospect of fighting Gennady Golovkin, writes John Dennen

HOW do you beat someone like Gennady Golovkin? He applies terrible pressure, hits with genuine force and has the footwork to always impose himself on his opponents. Perhaps Kell Brook will back off, manoeuvre round the ring and expect that because he’s lighter he can move faster. So far though Golovkin has shown an uncanny ability to quickly cut down space in the ring. If Kell needs to drive the Kazakh off, force him on to the back foot for once, will he, two divisions up from his normal weight division, have the power to do that?

Brook believes his life has built him for this moment. “Me getting stabbed and worried about if I’m ever going to walk again, never mind box, I think it’s got me ready for this point now. I’ve stared death in the face and I’ve been put here for a reason,” he said.

“I’ve not come to make the numbers up. I’m going there to take this massive win, a win that’ll be the biggest we’ve ever seen. That’s what pressure I give myself. But I always perform. When my back’s against the wall I always come up with the goods.”

He insists he can handle Golovkin’s power. “I’ve been sparring with middleweights, I’m just more heavy-handed,” Kell said. “When I’ve been getting hit, I’ve had no problem. I’m feeling different. I’m healthy at this weight so I’m able to take them a lot better and I’m obviously going to need them a lot better.”

“I just know what I can do,” he continued. “I’m going to go in there and concentrate on what I do in the gym and get in a rhythm and start doing what I want to do.

“I believe that the skills I’ve got and the mindset and the determination are different to everyone else’s.”

And he adds, “This is boxing. Anyone can be beat.”