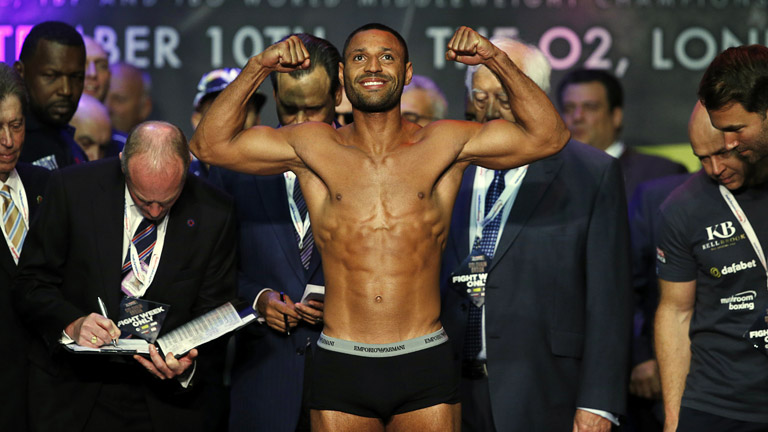 SHEFFIELD’S Kell Brook taking on unbeaten American Errol Spence is the type of elite-level, pick ’em fight boxing needs. Yet history shows this challenge may be the last thing that Brook himself requires – and that’s only half to do with the talented southpaw in the opposite corner. Brook has another fight on his hands too.

Defending his welterweight IBF world title belt means Brook dropping back down to a weight that he was already struggling with even before he leapt two weight divisions to face Gennady Golovkin in September 2016. Middleweight isn’t Brook’s natural weight, but unlike his off-again/off-again dance partner Amir Khan (who looked less than ripped at the 155lbs catchweight as he weighed in against Canelo Alvarez last year), Brook looked solid on the scales at 160lbs.

Understandably so, as his camp had been designed specifically to prepare his body – via a regime put together by the Boxing Science team at Sheffield Hallam University – for a fight 13lbs above his usual weight.

Frankly, the history for boxers who’ve bulked up, then tried to drop back down in weight, doesn’t make for pretty reading. The obvious example is Roy Jones Jr, who enlisted the help of strength and conditioning wizard Mackie Shilstone to put on weight ahead of his heavyweight bout with John Ruiz in March 2003. That worked a treat as a larger, sculpted Jones retained his speed to outbox the cumbersome Ruiz.

Yet when Jones dropped back down to 175lb that same year, he looked sluggish and leaden as he won a controversial decision over Antonio Tarver. In the rematch, Jones was brutally knocked out in two rounds. Chris Byrd also looked a shell of himself after a long career as a small heavyweight, he chose to slim down to light-heavyweight in May 2008. All of a sudden a boxer who’d withstood hefty blows from the Klitschko brothers was being dumped to the canvas in the first round by little-known Shaun George.

More recently, Chad Dawson stepped down from light-heavyweight where he’d just established himself as top dog, to super-middleweight to take a one-sided pasting from Andre Ward. No shame in that, but Dawson has looked a spent force since.

Of course, there are more cheering examples of fighters who have moved down with success. Enzo Maccarinelli briefly reinvigorated the tail end of his career recently after going from cruiserweight to light-heavyweight. Further back, the great-granddad of weight jumpers Bob Fitzsimmons went from winning the world heavyweight title in 1897 to winning the light-heavyweight version in 1903. In the lighter weight classes, where the margins are small, several boxers have managed to drop down a division successfully.

However the caveat here is that in most examples, the fighter in question was perhaps just adjusting to a weight that suited them better all along – or making a drop of only a few pounds. Brook, in coming down from 160lbs to a 147lbs weight he’d struggled with – and fought above previously – is inevitably going to be reducing muscle mass for this fight.

Of course, all this doesn’t mean you should immediately go and empty your life savings to bet on a Spence win. No two bodies are the same and they won’t necessarily react in the same way to changes or challenges. Brook and his team will undoubtedly be following the smartest and safest route back to 147lbs they can find.

Trainer Dominic Ingle has talked persuasively about how Brook at least has time now to gradually get his weight down for this fight. But then the noise coming out of the camp pre-Golovkin was how much better Brook looked in training as he wasn’t having to arduously boil himself down. Even in the immediate aftermath of his gutsy display in that fight, most seemed to agree that 154lbs – rather than 147 – would be his natural home in the future.

Perhaps we can chalk most of the above down to the fact that any boxer or trainer will spin a situation as a positive before their next bout.

One quantifiable advantage Brook has over both Jones and Byrd, for example, is relative youth. Jones was 34 when he pushed his body back down to light-heavyweight after his one-off heavyweight bout, while Byrd was 37 when he attempted to go back down in weight.

Brook is 30 years old and should still be at or close to his physical prime. Perhaps his body can handle this. Perhaps. But Brook is putting his body through a test – and perhaps even he won’t know how if his speed and stamina will be unaffected until he’s weighed in at 147lbs, replenished and is standing opposite Errol Spence. Only then will we discover just how much permanent wear Kell Brook has put his body through in his admirable quest for boxing gold and glory.