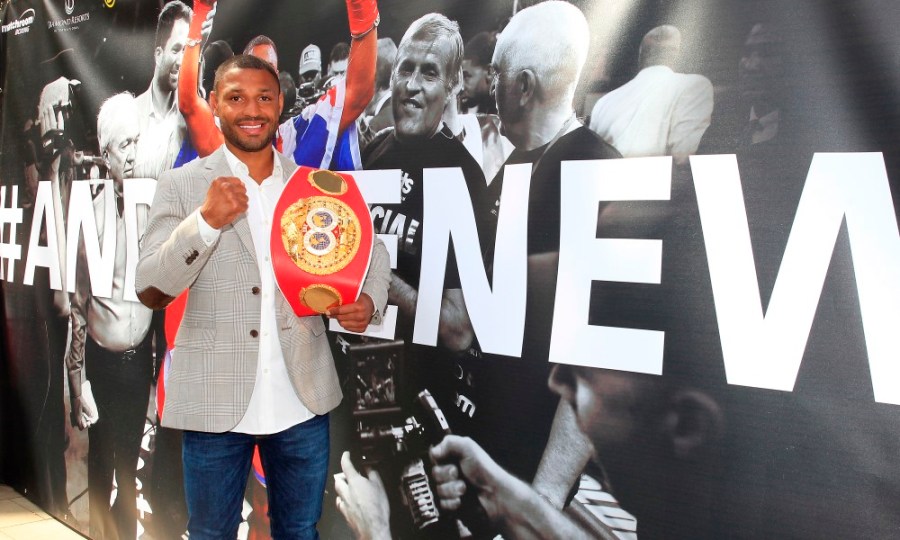 Newly crowned IBF World Welterweight champion Kell Brook received a hero’s welcome in his hometown of Sheffield yesterday – and told his adoring fans he cannot wait to put on a show at the Motorpoint Arena in his first defence.

Brook took the title from Shawn Porter in California last weekend with a stunning points win on enemy turf, and the unbeaten star is set to defend the belt for the first time in his hometown, with December 6 the likely date.

The 28 year old met the Lord Mayor at the Town Hall before greeting a packed crowd of supporters at The Winter Gardens, and he told them that their support was crucial in driving him to victory in the States.

“It’s been a long road to get to where I am now and my feet haven’t touched the ground yet,” said Brook. “The fans have been amazing all the way throughout my career and it was great to be able to thank them all yesterday.

“It’s beginning to sink in, all the people that came out to support me yesterday has really brought it home.

“I didn’t go to sleep after the fight because I didn’t want to wake up and it all to have been a dream! I reached the highest level you can in boxing by becoming a World champion and now it’s all about fighting the very best and packing out the Arena and even football stadiums.

“I haven’t watched the fight yet, I have seen a few highlights but I will watch it properly soon. I’ve been non-stop since getting home so I haven’t really had the chance.”

Brook has gone on holiday for a fortnight and while he soaks up the rays and reflects on his achievement, his promoter Eddie Hearn will be working hard to land a big name for his first defence before Christmas – and Brook is eyeing up a blockbuster clash with Amir Khan next year.

“I am World champion and the big names are going to be after my belt,” said Brook. “Fighting these better fighters will bring the best out of me. I just want to excite the fans and I’ll be bringing the heat to whoever I face.

“I haven’t been looking at what people have been saying, the fact is that I went out to America and faced a guy that they were saying was the Mike Tyson of the Welterweight division and he was going to walk through me, and I did what I said I was always going to do, and that’s become World champion and I hope that I get the respect now from those doubters.

“Everyone has got their own opinion but now people know I belong at the elite level I am getting that respect, it’s been a long road and it’s now about defending it in style.

“Amir and I both want the fight, so it’s just getting down to making it happen. We both need to win in December but there’s no reason why after that we can’t fight, it’s going to be an exciting fight, I think we’re just going to stand in the middle of the ring and go to war. It’ll be Froch Groves all over again, there will be a massive crowd and huge interest – let’s get in the ring and see who number one is.”

Hearn recalled how ‘The Special One’ was nervous at the crowd reaction ahead of his first fight with Hearn and Matchroom Boxing over three years ago when Brook defeated Lovemore N’dou at the Hillsborough Leisure Centre in June 2011. Brook quickly moved into the Motorpoint Arena fortress and Hearn believes that Brook is ready to not just defend his title, but become a legend in the sport’s most lucrative division.

“In the dressing room before he boxed N’dou, Kell asked me if he thought he was going to get a good reception,” said Hearn. “I told him there was 1,400 sell-out in the venue and they were here for him. He’s gone from that, to selling 9,000 tickets against Matthew Hatton and now taking a title off an unbeaten American in America.

“He’s come so far but there’s no limit to what this man can do. There are three World champions at Welterweight; Floyd Mayweather, Manny Pacquiao and Kell Brook – that’s the company he is mixing with now. We’re talking seriously big fights. Kell, the team and myself all knew that he would get there, and while it took a little bit longer than we thought, he’s there now and I know him, he’s not going to settle for just winning a World title, he wants to unify the division and become an icon for British sport and the great boxing city of Sheffield.

“The support he’s received since we ended his six year hiatus from his hometown against N’dou has been incredible and the fans are going to be rewarded now by seeing this fantastic talent in some mega-fights and great nights, starting on December 6 right here in Sheffield.”