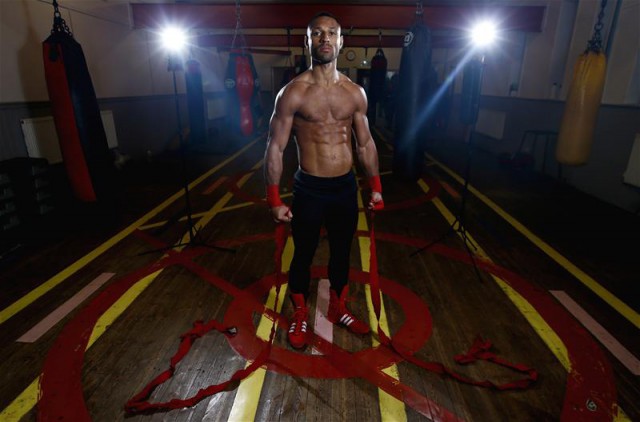 Brook insists holding the IBF crown should book him a unification clash with Mayweather or Pacquiao, writes John Dennen

ON May 3 Kell Brook turns 29. On that day, as well as his birthday, he hopes to celebrate being one of only two men to hold welterweight world titles. Brook needs to get through his March 28 IBF title defence against Jo Jo Dan, while Floyd Mayweather and Manny Pacquiao box on May 2 to determine both the world’s best at 147lbs and the holder of the WBC, WBA and WBO belts.
Brook’s message to the Mayweather-Pacquiao winner is simple. “I’m there with a belt if you want a unification. He’ll be wanting to have all the belts, there’ll only be me and one of them two with a belt [in] the hottest division,” Kell said.
He does expect the victor of the May 2 mega-fight to be Floyd Mayweather. Kell said, “Mayweather wins it quite comfortably I believe. I think when you see the build-up to it, when you see Pacquiao with his blistering hand speed and stuff you start questioning it. But just [from] the way that he dealt with [Juan Manuel] Marquez, every time Marquez and Pacquiao fight you can’t really split them. But I think he’s too smart, Mayweather can control pace and his timing is excellent. I think he wins it easy.”
Brook admires pound-for-pound king Mayweather but insists, “He’s a target now obviously. He’s been at the top for many years, no one’s come near to touching him. I’m here with a belt now, I want to get in there. He’s getting on to touching 40 [years old] now. His hands aren’t the best, he’s getting old. There’s no one bigger than me at welterweight who’s going to be pushing and coming forward to beat him.
“I’d definitely be up against it but I’m unbeaten, I’m in my prime, I train hard and I’d go in there 100 percent to win.
“It’s like I’ve been overlooked. I think once I take a big name out, [which] hopefully I’m going to do this year, I think they’re going to really pick up on it then.”
For more on Mayweather-Pacquiao click HERE
The 100-page Mayweather-Pacquiao ultimate fans’ guide is available on the Boxing News app NOW!