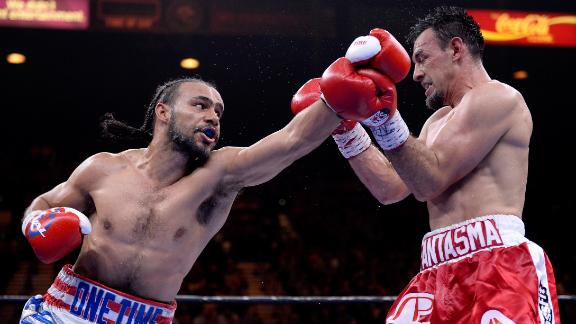 KEITH THURMAN is promising fireworks when he defends his WBA ‘Regular’ world welterweight title against Luis Collazo in Florida this Saturday.

The unbeaten American will be fighting in his home state for the first time since 2009 and is coming off the back of an exciting points victory over Robert Guerrero in March.

The 26-year-old is hoping to reignite the love affair with boxing in a state that has produced fighters like Roy Jones Jr, Winky Wright and Jeff Lacy.

“Tampa used to have a rich boxing history and I’m looking forward to bringing that back,” he said.

“This is going to be an exciting night of boxing. We have a lot of talent from Tampa on top of even more world class talent on the card. If you’re off the clock, get there at 6:30.

“July 4 there were some nice fireworks, on July 11 there will be better ones.”

Collazo, a previous holder of the WBA 147lb strap, insists he will not be there to make up the numbers and is planning an upset.

“Keith Thurman is a champion, I can’t take anything away from him. He’s a champion in boxing but he still has more to learn. There’s not a day I go to the gym and don’t learn something new,” he said.

“I’ve had a great camp and I’m sure Keith has too. This is a fight you have to be ready for, not only physically but mentally as well.

“I’m not here for a handout. I’m coming here for win and to bring that belt back to Brooklyn.”