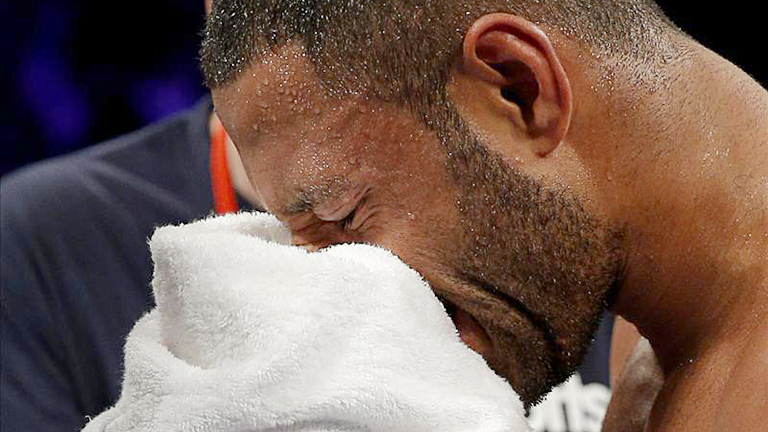 KEITH Thurman is not afraid to speak his mind. The undefeated welterweight champion recently shared his thoughts on Kell Brook’s decision to face Gennady Golovkin, and the future of the 147 pound division in a recent interview with Premier Boxing Champions.

“Brook is one of the best athletes in his weight class,” said Thurman. “But he’d never moved around with 15 extra pounds for 12 rounds. I wanted to get in his head like, ‘Why are you doing this? You haven’t faced a 147-pounder like myself yet, and you haven’t even faced a 154-pounder like Canelo [Alvarez], and you’re going to go in there with Triple G?’”

The Sheffield native was lauded for his decision to face one of the most avoided men in the sport in Gennady “GGG” Golovkin. And he didn’t just show up. He gave Golovkin one of the toughest fights of his career. That is, until his right orbital bone was shattered by a “GGG” punch. He was eventually systematically broken down until his trainer, Dominic Ingle, was forced to throw in the towel.

“I hope that he received the best paycheck of his career and invests in the best doctors and physical therapy, [because] it could play out as a very horrible business and career decision,” continued Thurman.

Brook, and his promoter Eddie Hearn, have hinted at the possibility that his March fight against Kevin Bizier will go down as Brook’s last at welterweight. To date, however, no official announcements have been made regarding the issue.

Meanwhile, Errol Spence, Brook’s fast-rising mandatory challenger, is waiting in the wings for his shot at the red belt. Spence looked sensational in his last outing against a tough veteran, Leonard Bundu, who had never been stopped in 36 professional fights- including in one against Thurman himself.

Thurman has been clamoring for an opportunity to unify the division since acquiring his world title against Robert Guerrero in March of 2015. He has called out Brook before and did it again recently, but added that it’s only a matter of time before Spence owns the IBF title outright.

“One way or another, Errol Spence is getting that title,” continued Thurman. “Kell Brook can vacate if he wants no part [of Spence], and Errol could get it by fighting a non-champion. But I’ve always loved the idea of an Errol Spence-Kell Brook fight”

“…or Thurman-Kell Brook,” he added, leaving the door open to a fight with the Brit. “I wish Kell a full recovery so we can give fight fans and the world of boxing what it truly needs.”