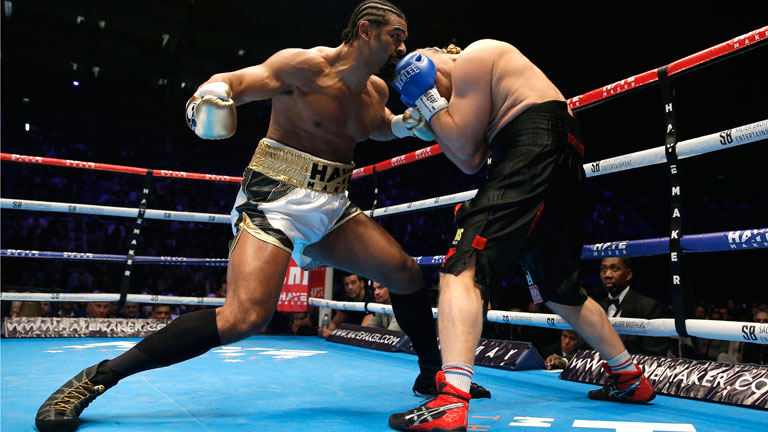 A SUCCESSFUL night for David Haye, financially anyway I would think, with what looked like a near full house on his own promotion and also millions watching live on a free-to-air TV channel.

It goes to show the true value of good promotional advertising, and total bull****. David was fighting someone ranked 106th by BoxRec, and of course was expected to win, which he did convincingly. But, to be honest, you bloody well should look convincing against someone who didn’t throw a punch in anger and was merely target practice for David.

It brought back memories of my uncle Jimmy, who used to have a punch-ball machine outside his arcade, and you had a shot at it for a penny to reach the highest score on the punch dial. The only difference was David Haye’s punch-ball had a beard on it. In fairness, Haye can only beat what’s put in front of him which he did. I think David knew it was going to be an easy night’s work, and realised he needed to brush the cobwebs off after his long layoff, but to get rid of ring rust you need five or six rounds, not a couple of minutes chasing after Ned Kelly.

There is no way that that fight could be used as a yardstick to challenge Tyson Fury, but what I will say is, Anthony Joshua should avoid Haye for now. Anthony showed too many frailties against Dillian Whyte, and Haye, with his superior experience would quickly exploit them if Haye-Joshua was made. As for fighting Tyson Fury I would think David Haye has burnt his bridges after pulling out twice in the past.

All in all though the heavyweight division in Britain is looking in a very healthy state, it brings back memories to me of the 1960s when we weren’t all that well endowed with future world champions, but we had a dearth of top heavyweights that kept the domestic scene on the boil: The Cooper brothers, Dick Richardson, Brian London, Joe Erskine and Joe Bygraves. Now we have the The Fury cousins, Anthony Joshua, David Haye, Dillian Whyte, Derek Chisora and David Price. However, although the talent is there, is the will to fight each other there?

There’s plenty of names there for David Haye to pick from, and show his promotional skills again, and put another show together, move up the ratings, to finally get another shot at a big one and deserve it.