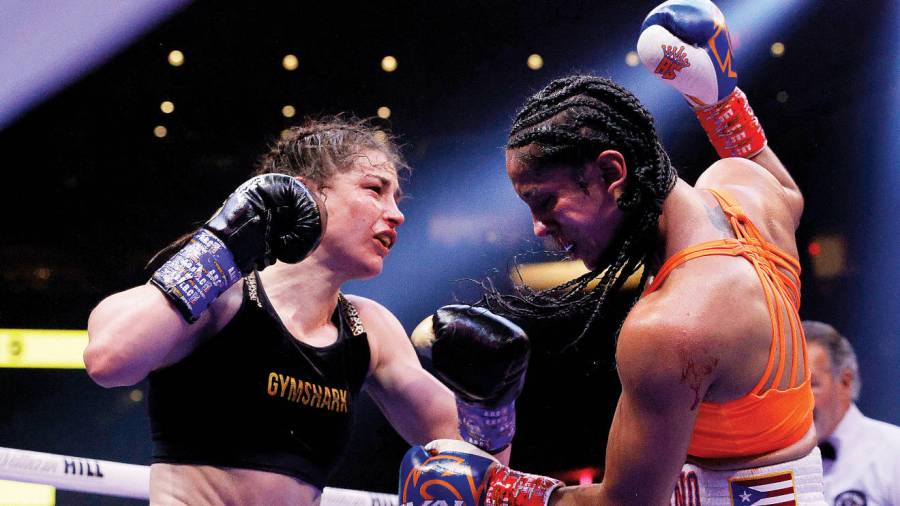 Matt Christie on Katie Taylor vs Amanda Serrano, the holy grail for boxing

NOW and again a fight comes along that changes everything. Katie Taylor and Amanda Serrano, we salute you. Not only for the effort you both put forth inside a prize-ring but for the cheer you gave an entire industry when we needed it the most. You reminded boxing fans how great this sport can be. More importantly, you crafted an advertisement we can now show to those who for too long have failed to see what this sport is really about.

Eddie Hearn, take a bow, too. You believed in women’s boxing when so many did not. You provided the platform for female fighters to flourish. Now they thrive on the biggest stage. It did not, and could not, happen overnight. Even Jake Paul, not a exactly a hero to the hardcore, should be applauded for putting his whopping great ego to good use.

We have long been advocates of women’s boxing. At first, it was predominently on the amateur pages, before the professional code was essentially reborn when Taylor herself turned over in 2016. Four years later, when Natasha Jonas and Terri Harper engaged in a fight of the year contender, we received some criticism from readers for putting that contest on our cover.

This week, even in a Canelo Álvarez Fight Week, the decision to put Taylor and Serrano on the front was a no-brainer. This time, I suspect, no-one will grumble about our choice.

Taylor versus Serrano ticked all boxes: Two-well matched fighters at the mountain top of their trade; two impeccably behaved athletes in the build-up and aftermath; Madison Square Garden played host, the mecca of boxing long before any other venue could claim to be; impeccable and honest officiating; and breath-taking action that had twists, turns and three – yes, three! – contenders for Round of the Year.

Better yet, particularly in the current climate, there was not a single awkward question that needed to be asked in the lead-up or afterwards. No unwanted subplots. No suggestion that either fighter should be fighting a more worthwhile opponent. All we wanted to find out was who was the superior boxer.

The last question may remain unanswered for now. I thought Taylor edged a very close fight, 96-94 (six rounds to four). Thomas Hauser, our ringside reporter, liked Serrano by the same margin. In the end, this was one of those rare occasions in a sporting contest where both winner and loser emerged with their reputations considerably enhanced.

And it was one of those fights that could claim to be legendary even while still in progress, that everyone involved in the sport – at whatever level – can and should be very proud of.

There were of course talking points. One being the old criticism aimed at women’s boxing, which is the number of rounds (10 rather than 12) and the duration of them (two minutes rather than three). Though I certainly understand the merits of switching to 12-threes for championship level boxing, it’s only fair to point out that when two evenly-matched combatants engage in the 10-twos format it never disappoints. The shorter sessions demand an intensity sometimes lacking in the men’s code and invite the fighters to go all out in a way that three-minute rounds do not.
So rather than presuming the women should follow the men, how about flipping that on its head for a moment. Would 10-twos make men’s boxing more exciting by ensuring that the fighters involved had no time to waste? One can point to fights like Floyd Mayweather-Manny Pacquiao and make a pretty good case. We can also use the countless 12-and 15-round barnburners in the sport’s history as strong evidence to the contrary. But I now believe that the high pace two-minute rounds play a huge part in making fights like Taylor-Serrano very special indeed. Let’s think very carefully about tinkering with a tried and tested formula.

Let’s also be realistic about where we are in the female code’s journey – still just getting started. For every Taylor-Serrano there are many more mismatches. For every Katie Taylor there are countless rank novices who should not be anywhere near a boxing ring. The talent pool remains somewhat shallow and there are far too many belts being handed out to those who do not truly deserve them. Yet the matchmaking at the top level is fearless and the fighters don’t dilly-dally when it comes to accepting defining fights.

The egos, by and large, are left at the door. One only had to look at Taylor’s face as she stood on the ring apron. She was not too shy to bask in the atmosphere and smile. Serrano too could be seen loving every moment that came before the first bell. And when it sounded, the fighting was pure and honest. It was all about achieving victory, nothing more or less.

Taylor showed off her considerable boxing skills in the early rounds. Her punches were accurate and her ringcraft a delight. Yet it was Serrano, when she turned up the heat in the fourth, who came with the power and pressure. How Taylor survived the fire in those middle rounds, we will never be able comprehend. That she not only survived, but regained control, is testament to what lies within the great Irishwoman. She is made of outstanding strength and fortitude, the kind that cannot be taught. It will see her fondly remembered long after she’s gone. Nobody can ask to leave a more impressive mark than that.

Better still, this contest will have been seen by youngsters – both male and female – who will now be inspired to be fighters themselves. For all the right reasons, too. Not to shout and swear and get rich quick, but to train hard and dedicate themselves to a road they hope will one day lead to glory. Not only that, it invited new fans to the sport. Again, the right kind of fans for all the right reasons. Those who will have recognised the energy and raw appeal of boxing. Those who don’t want to see pantomime-style nonsense but those wishing to see, very simply, the best fight the best.

And therein lies the real message of Saturday night’s event. The sport of boxing can only be great – truly and consistently – when fights like Taylor-Serrano are not rarities but regular occurrences. It does not have to be a pipe dream.