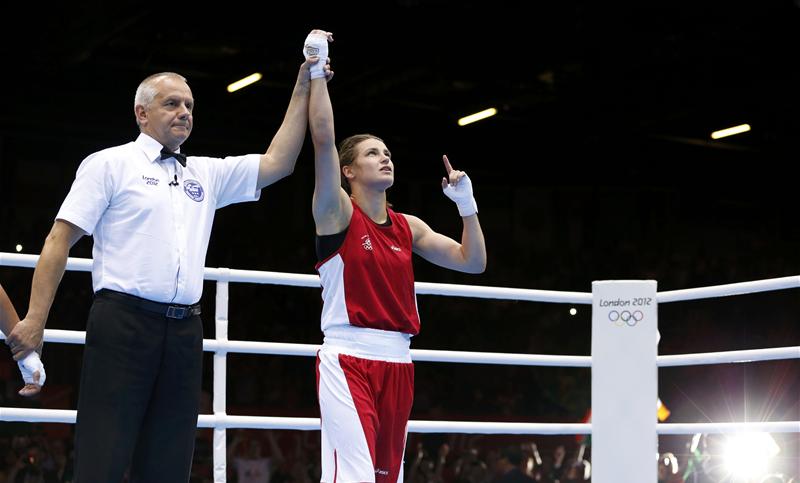 “ARE you sure?” she asked. “Are you sure?” Katie Taylor just had to have it confirmed that she was going to Rio 2016. The reigning Olympic gold medallist could breathe a sigh of relief. “Thank God,” she said.

After losing at the European Qualification Event in April, Taylor is competing at the World championships in Kazakhstan to win her place at the Olympic Games in August. She did that on Tuesday, outpointing Mexico’s Victoria Torres, who put in a spirited challenge. The Mexican tried to grind forward and rough up Taylor. But Katie stood her ground at times, working excellent combinations that saw the left hook fly into the body and hard rights chop down. At other moments she moved off, pivoting away behind well-timed lead hooks. Taylor ultimately won a unanimous decision, 40-36 for all three judges.

“It’s been a dream to defend my title since London. This is every boxer’s dream so thank God I’ve crossed the line now. It didn’t happen to me last month but thank God, Zaur [Antia, her coach] has done everything for me over the last few months. I would have been lost without him. I wouldn’t be here without Zaur and Eddie [Bolger] of course,” Katie said. “I’m feeling great. I was bit tired today but you’re always going to be tired in those kind of fights. It’s great to be in the semi-final with my fellow team-mate Kellie Harrington, who’s also in the semi-final.”

From the all-consuming pressuring of worrying about qualifying for the Olympic Games, Taylor now turns her attention to winning these World championships. If she manages that, the Irishwoman will become a six-time World champion, breaking the record jointly held by herself and India’s Mary Kom. Thinking of Kom, Katie noted, “She’s unbelievable. When I won my second World title she went to win her fifth World title, everyone was in awe of her really. It was such an honour to even her record really, she’s been such an ambassador for women’s boxing. There’s been nobody like her really in the likes of Asia. She’s a hero for women’s boxing.”

The Irish lightweight would set down another marker if she breaks that record here in Astana. “It’s great to make history,” Taylor said. “I’ve gone into this competition with the hope to bring back a gold medal.”