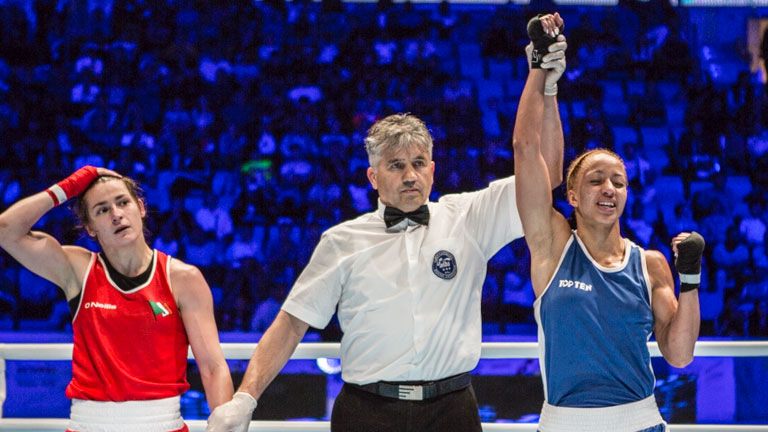 KATIE TAYLOR suffered a shock defeat today in the semi-finals of the Women’s World championships in Astana, Kazakhstan. France’s Estelle Mossely did press Taylor, connecting with good shots at times, particularly in the third round. But Taylor worked at a high volume snagging the Frenchwoman with crisp, clean blows. However after the fourth round Mossely levelled it 38-38 for two of the judges and then on preference those cards went to Estelle. It means Mossely won on a stunning split decision.

Taylor was looking for a record-breaking fifth consecutive World gold medal. This result means that instead Katie has to settle for bronze. “I knew every round was quite close,” she said. “I was doing everything to plan. I don’t know. I’m not sure. It’s hard to comment.

“It was always going to be a tough fight, the semi-final of the World championships. I’m just very disappointed obviously… I planned to come over here and make history by becoming a six-time World champion but unfortunately that didn’t happen for me.”

She continued, “It’s still a positive thing that I qualified for Rio but it was only the job half done. I wanted to come home with the gold medal. It’s just very disappointing.”

Taylor is the dominant force in women’s boxing but this is her second surprise defeat in the space of a couple of month. Azerbaijan’s Yana Alekseevna beat Katie at the Olympic qualifier in April meaning Taylor had to make sure of her place at Rio by reaching the semi-finals at these Worlds.

She now has to refocus on her next target. “I’ll have a week or so off and then start preparing for the Olympics,” Taylor said.

Ireland will be represented in the finals on Friday at the Barys Arena. 64kgs Kellie Harrington won her semi-final well, stylishly hammering Canada’s Sara Kali to win a unanimous decision.

Click HERE for everything that happened at the World championships today.