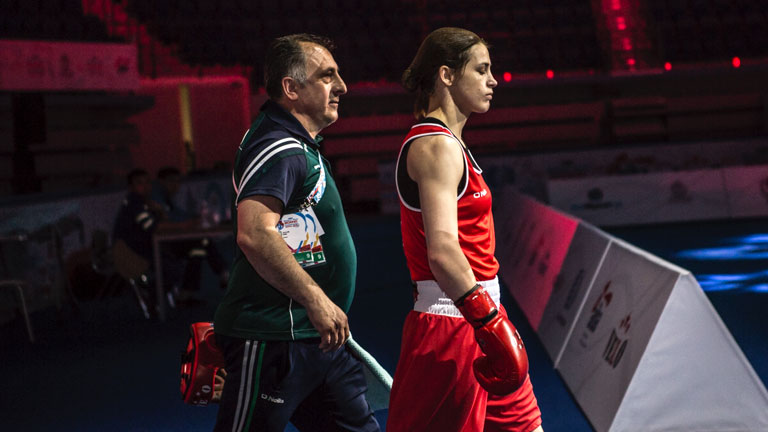 Katie Taylor is one win away from the Olympic Games. John Dennen reports from the Barys Arena in Astana

KATIE TAYLOR left no doubt about the outcome of her clash with Argentina’s Dayana Sanchez at the AIBA Women’s World championships in Kazakhstan on Monday. The Irishwoman had the edge in speed and power and made full use of her attributes. She cracked the Argentine with headshots, rocking her back on her heels when Taylor’s hard hook told.

With unerring accuracy Taylor exposed the holes in Sanchez’s defence and Katie poured in punches with gusto. Dayana was shipping punishment but instead of tucking up behind her gloves, Sanchez waded forward. Taylor met her head on, lashing the right hand in. Katie was only called off from the battle when her coaches called for her to move rather than trade. With the bout well won, she circled Sanchez as the final seconds ticked down. An accidental head butt had given her a bleeding nose in her previous bout and Taylor didn’t need to put it under any further duress. “I had a head clash in the first fight actually, three head clashes in a row, so it opened up a small bit but it’s fine,” she said.

This was a dominant victory, 40-34 and 40-35 twice on the cards. “Every fight’s a pressure fight. I just have to stay focused throughout the whole competition. I have the same nerves for every fight,” Taylor said. “I’ve always been a really high tempo fighter, I do try to be an exciting fighter and to work hard through every single round and to try to win every single round convincingly.“

This victory has put Taylor through to the World quarter-final on Tuesday, a bout Katie has to win. She needs to reach the semi-finals of this tournament if she’s to qualify for the next Olympic Games and defend the gold medal she won at London 2012. Mexico’s Victoria Torres stands between her and the dream tomorrow.