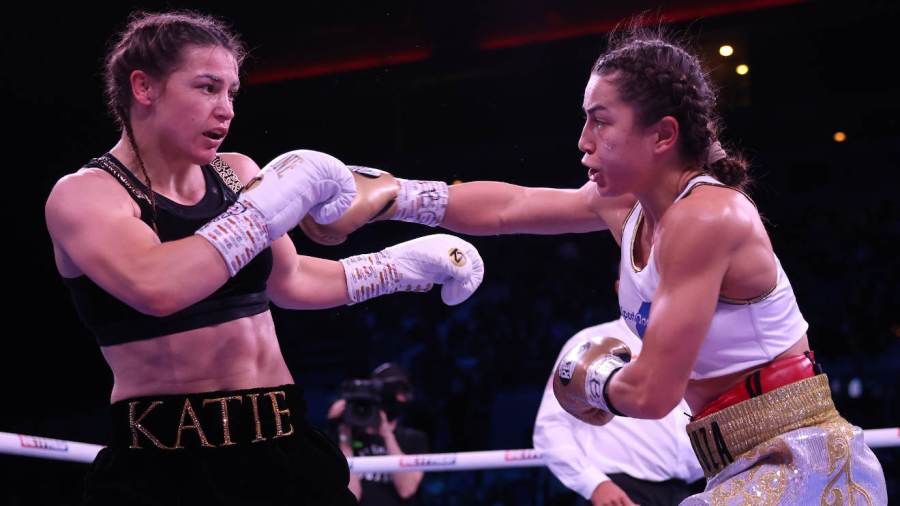 Amanda Serrano should be next. In her own words Katie Taylor explains why this is the fight she's been waiting for

I think when you’re in there against the best fighters you definitely do rise to the occasion.

Saturday was no masterclass by any means but a win is a win and these can be banana skin type of opponents as well. So the most important thing in these kind of fights is just getting the win and I knew this was going to set up a huge year for me next year.

The mandatory challengers are always tricky opponents so it was a good win. It was an okay performance from me. It certainly wasn’t like I said a masterclass but Firuza Sharipova was an awkward opponent. She was holding a lot on the inside as well, it was hard to get your shots off.

I knew coming into this fight she was a great fighter, technically very good, she was a good amateur as well. So I was expecting a tough challenge. I think everybody else was overlooking this opponent but we certainly weren’t.

I needed to get the win in this fight and then I’m looking at bigger names next year. This is genuinely more than a dream for me, to have a chance to actually headline at Madison Square Garden, the most iconic venue in boxing, so it is huge and possibly against Amanda Serrano. It’s just the biggest fight in women’s boxing right now. This is exactly what I got involved in professional boxing for. To be involved in fights like this and to be fighting on big stages like this. So it’s very, very exciting.

I remember even against Eva Wahlstrom hearing the ‘ole, oles’ round the stadium it was incredible so I can’t imagine what it’s going to be like if I’m actually headlining.

I feel more pressure ahead of fights like Sharipova, like mandatory challengers. They can nearly be banana skin type of opponents. For the last few months all I’ve heard of has been the fight with Amanda Serrano.  I knew I had to get through Sharipova if these big fights were going to happen next year.

I think this fight is a genuine 50-50 fight. She’s going in believing she’s going to win 100 percent and so am I. This is what makes the best fights in boxing. She genuinely believes she is going to win the fight and she’s obviously very experienced. She has a huge knockout ratio, she’s one of the most known female fighters in the world over the years. Ever since I started the professional game a few years ago this fight has been talked about so it has been building for a few years now.

I think it could definitely be one of the career defining fights for me for sure. This is a huge fight, it’s a mega fight. Not just in female boxing but in boxing overall. This is a huge, huge fight. It’s a super-fight. So these are the fights that you want to be involved in as a professional boxer. To come through these kind of fights is definitely career-defining.