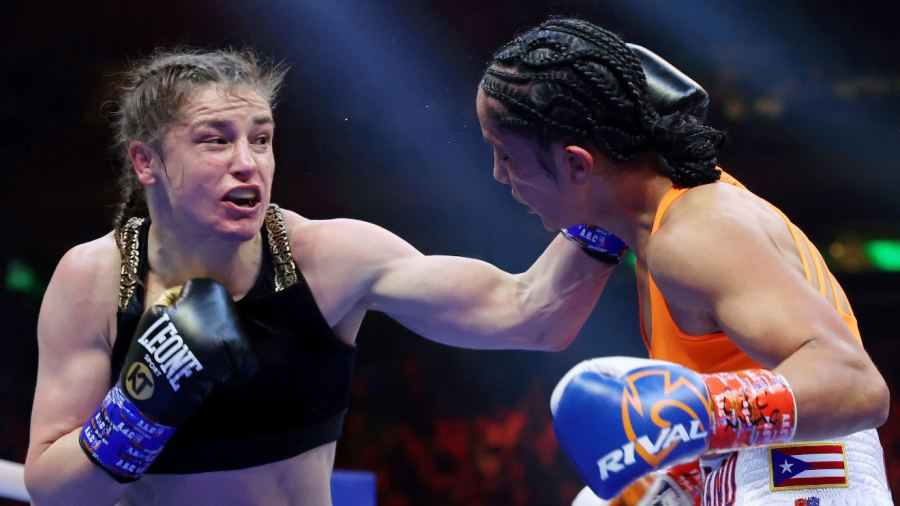 KATIE TAYLOR defended her world lightweight championship in a thrilling, gruelling 10-round battle with Amanda Serrano at Madison Square Garden in New York on Saturday.

The most significant fight in the history of women’s boxing, it was the first time two female boxers had headlined at Madison Square Garden and the bout lived up to the occasion. The contest was close, ferocious and compelling throughout.

The power of Serrano, a southpaw, was clear as she came out and took the centre of the ring. A hard left hook caught Taylor, a warning shot. Taylor began to tag Serrano with quick crosses. The challenger ground forward with heavy shots, the punishing left catching the Irish star’s body.

In the fourth round Taylor showed off her boxing, firing in a combination before moving out, as well as slipping and countering with a sharp shot. But in the fifth round Serrano trapped her on the ropes. She hammered Taylor with heavy hits. Serrano had made a big breakthrough. Taylor reeled away from her. She was badly hurt, swaying but somehow Taylor kept her feet under her and didn’t fall.

Taylor showed immense resilience. In the sixth round Serrano still came on strong, jolting Taylor’s head back. But she wasn’t quite as active. Taylor would not only survive but also recover herself. The champion picked out good shots, her right shooting in to catch Serrano.

The result was in the balance going into the last two rounds but Taylor demonstrated her quality, boxing with good footwork in the ninth, coping with Serrano’s power in that round. They finished the 10th tearing into each other. Serrano seemed to hurt Taylor again yet the champion still let her hands go, getting to Serrano herself and simply not permitting herself to wilt.

“What a fighter Amanda Serrano is,” Taylor said. “Both of us have broken down so many barriers over our careers. I’m just grateful to be in this position really. What a fight, what a win, what a night.”

“I had to dig in this fight,” the champion added. “I have the heart to go with the skill, I knew I would be able to come through.”

Serrano said, “I’m truly honoured to have shared the ring with you. The best versus the best, you don’t see that much. I’m just so overwhelmed, look at this crowd. Women can sell, women can fight and we put on a hell of a show.”

Taylor had achieved legendary status as an amateur boxer, winning Olympic gold and an astonishing five World championships. She has been a leading figure in this new era of women’s professional boxing as she unified every major belt at lightweight. But this fight on this stage is her crowning moment, a defining moment for her legacy. In that sense it would also be the perfect moment to retire.

But Taylor is a warrior, one suspects she’ll want to fight on and a rematch with Serrano, after a night like this, might be hard to resist.