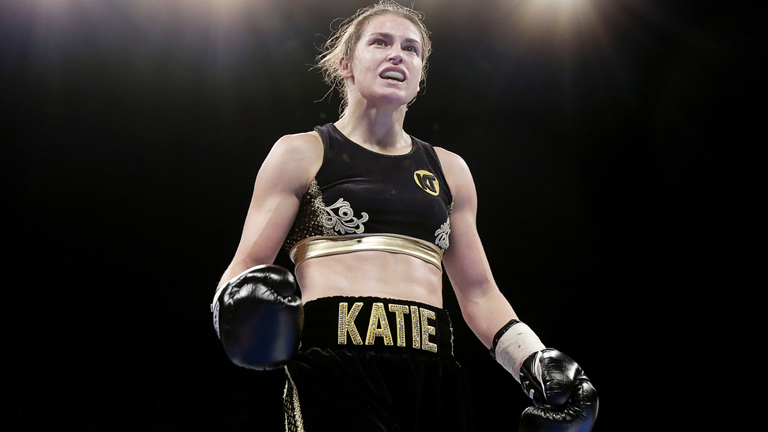 BRAY’S Katie Taylor, having totally cleared up in the lightweight division, stepped up to super-lightweight for the very first time at an incredibly noisy Manchester Arena. Challenging Athens’ classy Christina Linardatou for the WBO title, she was duly crowned a two-weight world champion.

Taylor weathered Linardatou’s early rushes, of which there were many, before increasingly dictating the pace, scoring with cleaner shots, staying on the move and resisting the temptation to get dragged into a scrap. She left her always-game and still-pressing opponent trailing in her wake, with a cut and increasingly swollen right eye not hampering her at all. The scores at the end of the 10-twos bout refereed by Mike Alexander read 96-94 and 97-93 twice for respective judges Marcus McDonnell, Stephane Nicolo and Giustino Di Giovanni.

Linardatou, who gave Taylor a more-than-decent fight, looked somewhat despondent at the finish and lingered long in her corner. The bout had increasingly moved away from her in the later stages, though, and she had no real cause for complaint.

Having treated his numerous fans to some rip-roaring entertainment down the years, a fair old percentage of it at this very same arena, much-liked local lightweight Anthony Crolla bowed out of the sport with a majority decision win against the tough Frank Urquiaga. The Barcelona resident proved a more-than-capable operator who hadn’t turned up just to make up the numbers.

A cut above Crolla’s left eye from a punch in the opener certainly wasn’t in the script, and although it didn’t worsen, it wasn’t particularly a fairy tale finish for the former WBA champ, with many of the rounds proving close-fought affairs. Mr Alexander scored 95-95, which was overruled by the 97-93 and 98-92 cards handed down by Howard Foster and Steve Gray. Phil Edwards refereed.

Nine months after securing the Commonwealth middleweight title with a first-round demolition of Rasheed Abolaji, Wokingham’s Felix Cash journeyed north for what was never going to be an easy appointment with Little Lever challenger Jack Cullen, who had stopped five on the bounce going in. For the time that it lasted, this one proved an absolute war.

Cullen bounced back after being dropped in the opening minute to fully play his part, meeting fire with fire as the crowd roared their approval, with both boxers sustaining damage around the eyes. In the end, it was the hard-hitting champion who hung onto his crown when a sustained burst to the head, hot on the heels of a second knockdown, prompted hovering referee Foster to intervene at 1-14 of the eighth.

Credit is due to both warriors for serving up some excellent entertainment. Cash now has half an eye on a shot at the European belt.

On a night when women’s boxing was firmly in the spotlight, Denaby super-featherweight Terri Harper triumphed in some style against her toughest opponent to date – Switzerland-based Brazilian Viviane Obenauf.

In only her ninth paid bout, having had just 16 amateur contests, Harper served up probably her best performance yet, dominating en route to a unanimous 10-twos points win. Mr Di Giovanni, Marco Morales and Terry O’Connor scored 99-91, 97-93 and 99-92 respectively in her favour. After the announcement, the whole arena sang “Happy Birthday” to Harper. There’s doubtless much more to come from the 23-year-old. Mr McDonnell officiated.

Airdrie’s Congo-born heavyweight Martin Bakole doesn’t make a habit of hanging around. He’d only heard the final bell three times in his previous 15, so one wondered if Californian Rodney Hernandez, halted just once in 23, might be able to give the African more than just a few minutes of work in a scheduled 10.

The answer to that question, it transpired, was no. It was all over with 10 seconds of the second remaining. Hernandez, cut above the left eye, was sent over backwards, almost in slow motion, leading referee Gray to decide enough was enough.

An intriguing-looking super-bantamweight 10-rounder matched Leeds southpaw Qais Ashfaq and the Gorbals’ Joe Ham. Ashfaq sent Ham to the seat of his shorts in the third with a combination and opened quite a lead. When an accidental head clash left Ham with a nasty cut above his left eye, a halt was called in the seventh. The resulting tallies from respective judges Mr Gray, Grzegorsz Molenda and Mr O’Connor read 70-64, 70-63 and 69-64 to Ashfaq. Mr Foster refereed.

Birmingham’s quality Gamal Yafai returned from over a year on the sidelines with a torn bicep in a scheduled six against Heywood southpaw Lee Clayton. Yafai forced the intervention of Mr Edwards at 1-35 of the third by sending the courageous but ultimately overwhelmed Clayton to the deck with body shots for the second time in quick succession.

Sheffield prospect Dalton Smith banked victory number four by seeing off highly experienced Gerona-Nicaraguan Michael Isaac Carrero. Again, it was all over in three, with Mr Gray stopping it with 13 seconds of the round remaining as Carrero was in the act of falling in a neutral corner. It had been slated for six.

A pair of four-rounders completed proceedings, with home boxers notching 40-36 victories against overseas opposition in both cases. Relaxed Middleton portsider Nathan Farrell proved far too savvy for Croat Ivica Gogosevic (Mr Edwards officiated). Meanwhile, Leeds left-hander Hopey Price, formerly a top amateur, saw off another Gerona-Nicaraguan in the shape of Joel Sanchez, who was increasingly bested by the confident debutant. Mr Gray was in charge.

THE VERDICT Matchroom Boxing chief Eddie Hearn says Taylor is an “absolute legend”, while it’s goodbye from a Manchester legend in Crolla.