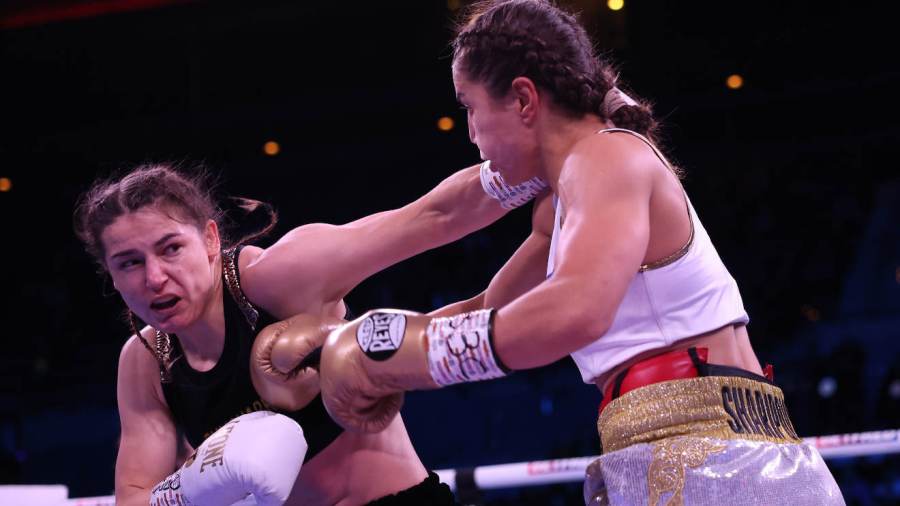 KATIE TAYLOR retained her lightweight world championship with a clear victory over Firuza Sharipova at the M&S Arena in Liverpool on Saturday night (December 11).

Taylor took the measure of Sharipova in the first round, slipping quickly back from the Kazakh’s jabs and staying poised, ready to counter.

She began to crack flush combinations of punches in, soon settling into a rhythm. A petulant swipe of the left after the bell had rung to the end the third round was a sign of Sharipova’s mounting frustration.

But the Irish star remained sharper and cleverer. She lined up her straight right cross, arrowing those blows through Sharipova’s guard. Just when Sharipova was bracing for that, Taylor turned a right hook in.

To rattle Taylor the Kazakh had to make it rough. Sharipova began to hold Taylor in clinches and hack shots at her in close. She went too far at times though, with referee John Latham taking a point from her for hitting on the break in the sixth round.

Sharipova enjoyed moments when she stood off and let Taylor fall short, taking the odd round over the course of the fight. But the Kazakh couldn’t shake Taylor’s control. Even in the ninth round the champion kept the shape of her boxing, moving easily, lancing in an excellent straight one-two before following up at once with the same combination.

The Kazakh launched a desperate attack in the 10th and final round, boring forward, holding Taylor in clinches and driving hooks into the champion with abandon, the occasional shot getting through. Taylor couldn’t prise her off and while the bout finished messily, Taylor defended her title with a unanimous decision victory, 98-92, 97-92 and 96-93.