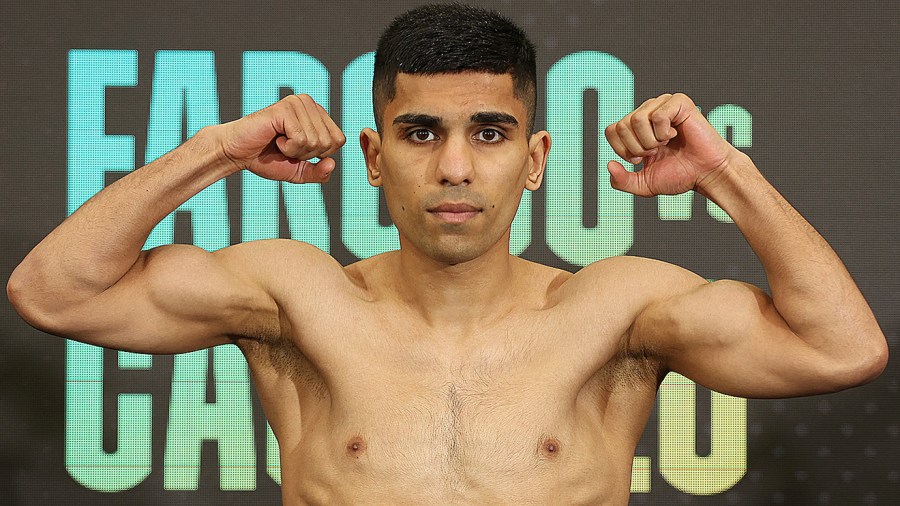 KASH FAROOQ, one of the brightest young talents in British boxing, has been left with no choice but to retire from the sport at the age of just 26. The former British bantamweight champion made the decision after his annual medical with the British Boxing Board of Control highlighted a change in his brain.

“There was a slight change in the scan and then further testing was carried out afterwards,” Iain Wilson, Farooq’s manager, told Boxing News. “We had a few different opinions and looked at it but his safety and health was paramount. There was no way I was going to let him continue. Who knows, he might have been able to go away and sort things out. But it’s too risky and too dangerous. He’s like family to me.”

“We left the decision up to Kash and his team,” the Board’s Robert Smith told BN. “But there was only once choice he could feasibly make. If he had decided to fight on, we could not have licenced him. It’s a great shame, he was a wonderful boxer.”

“The Untouchable” Farooq, 16-1 (6), was readying himself for a hotly-anticipated rematch with Edinburgh’s Lee McGregor, who contentiously outpointed the Glaswegian in a terrific 12-rounder in November 2019. Since his only loss, Farooq – after signing with Matchroom – had won three in a row.

“Boxing has been my life since I was 14 years old,” stated Farooq. “I have studied, dedicated, sacrificed myself to improve my quality of life and that of my family’s, enduring many hardships along the way, from boxing on small shows behind closed doors and not being able to sell a ticket to my name, to competing at the pinnacle of boxing, fighting on Sky Sports and DAZN with the biggest promoter in the world.

“My immediate leave comes due to my yearly medicals not being satisfactory for the British Boxing Board of Control with stricter regulations in place. I had a meeting with a doctor who advised me to take an exit from boxing with my full health intact, regardless if I wanted to carry on fighting and prove myself to be the best in the [bantamweight] division. It would be selfish of me to put myself in danger therefore my trainer Craig [Dickson] and manager Iain Wilson have instructed me to heed the advice from medical professionals.”

Farooq turned professional in 2015, beating Craig Derbyshire over four rounds. By the end of 2017, word about Farooq’s ability was spreading quickly in boxing circles. In November that year he stopped Scott Allan in eight rounds to win the Scottish Area bantamweight title. The following September, Farooq – born in Pakistan – was the champion of Britain when he trounced Jamie Wilson for the vacant title in just 73 seconds.

Two months later he outscored Iain Butcher over 12 rounds. Kyle Williams and Duane Winters were then respectively stopped in five rounds and one round, making Farooq the first British-Pakistani to win the Lonsdale Belt outright, before that aforementioned showdown with McGregor.

Despite the reverse, which most observers felt was unjust, Farooq was one of Boxing News’ prospects of the year for 2019. Class oozed from every combination he threw. It seemed certain that Farooq, a genuine joy to watch, would go on to win a major belt. In 2020 and 2021, he outpointed world fringe contenders Angel Aviles, Alexander Espinoza and Luis Castillo Castillo, each over 10 rounds. Last year it was confirmed that his promoter, Eddie Hearn, had won the purse bids to stage the rematch with McGregor in 2022.

“This is still a shock for me as it would be for many others,” he continued. “I am a young athlete who had plenty to offer with unspeakable potential and talent.

“I am humbled by the response from the boxing community and want to thank fellow boxers, promoters, managers, also the writers, journalists and members of the media for following and documenting my career.

“To all my fans, friends, supporters, family and every person I have met through boxing and shared a ring with, I am glad our paths crossed. The memories created and opportunities boxing has given me is unforgettable, I hope to see everyone soon.”

Farooq will remain in the sport. With St Andrew’s Sporting Club, he will be ‘Head of Talent’, offering advice and guidance to new and existing members of the burgeoning Scottish stable. He has every intention of staying in boxing.

“His attitude is great,” said Wilson. “It wasn’t a case of if he became world champion, it was when. Everyone in boxing knew that. So if young boxers can’t learn from him, there’s something wrong… For as long as I work in boxing, Kash will too.”

Everyone at Boxing News wishes Kash good luck in the future.