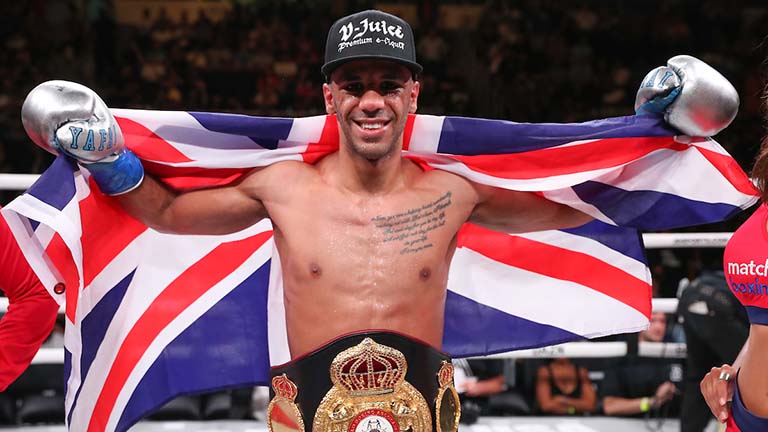 KAL YAFAI maintained his status as Britain’s longest-reigning current world titlist by unanimously outpointing mandatory challenger Norbelto Jimenez in what was the fifth defence of his WBA super-flyweight strap.

The fight wasn’t an aesthetically pleasing spectacle, but to be fair to Yafai, the awkward Jimenez is a difficult man to look good against. The 28-year-old Dominican was constantly on the move, and when Yafai did manage to pin him down, Jimenez would grab hold of the Birmingham boxer. This spoiling tactic led to a point deduction for the Villa Duarte resident in the fourth round.

Yafai, 30, tried his best to make things happen by pressing the action throughout. He mixed his attacks to head and body and displayed fast fists. However, Jimenez’s frustrating approach made it extremely difficult for the champion to establish any sort of rhythm.

A wide left hook caused Jimenez to stagger slightly in the second, although it was partly a slip. In the next session, a short left hook from Yafai forced the two-time WBA title contestant to back-pedal again.

After dropping to his knees following a low left hand from Yafai in the fifth, Jimenez was given time to recover by referee Danny Schiavone. The Caribbean native also complained about a shot below the belt at the end of the stanza. During this round, a head collision left Yafai with a cut on his hairline. The West Midlander claimed after the contest that the blood dripping down into his eyes had impaired his vision.

In the eighth, Yafai was fortunate not to have a point taken away after a pair of low blows – a right then a left – led Jimenez to sag down to all fours. The Brit was able to score an official knockdown in the 12th and final frame, though. A cuffing left hook sent Jimenez tumbling with not long left to run in the bout.

Yafai, who revealed afterwards that he had perforated both of his eardrums during the scrappy encounter, came out on top by comprehensive tallies of 119-107 (Eddie Scuncio), 118-108 (Nelson Vazquez) and 117-109 (Lynne Carter). With Matchroom Boxing having recently signed WBC 115lb king Juan Francisco Estrada, a unification clash with his new promotional stablemate could well be in the offing for Yafai.

“I want the Estrada fight,” Yafai said. “I love that fight. I want all the big fights, all the big guys – any of them.”

In the main event at the Dunkin’ Donuts Center, another unbeaten world title-holder, Demetrius Andrade, put on an eye-catching performance in front of a boisterous and expectant crowd of 7,136 people. Boxing for the first time in his hometown as a professional, the skilful southpaw dominated Polish contender Maciej Sulecki to such an extent that he won every single round on all three of the judges’ scorecards.

Determined to impress from the get-go in the second defence of his WBO middleweight crown, Andrade, 31, decked Sulecki after just 48 seconds when a left hook connected high on the Warsaw man’s head. It was a blistering opener from the two-weight world champ, who was more aggressive than normal – especially in the first half of the contest – and put his punches together in scintillating style.

The tough Sulecki, 30, kept coming forward but was unable to land anything of note, as Andrade exhibited fine defensive skills. The American was able to demonstrate the full range of his repertoire, including snappy double jabs and jarring lefts down the middle. It wasn’t at all surprising when the local favourite was announced a 120-107 winner for each of Glenn Feldman, Robin Taylor and Don Trella. Eddie Claudio officiated.

In the ring after the bout, Andrade made it clear who he wants to face next by calling out unified 160lb supremo Canelo Alvarez. The Rhode Islander roared: “Let’s go, Canelo! It’s right here. Let’s do it. No more running. No more games. Let’s put it all on the line and see who’s the best.”

In his first outing since linking up with Matchroom Boxing at the end of May, New Zealand’s former WBO heavyweight ruler Joseph Parker was in commanding form against Alex Leapai – the 39-year-old Australian who challenged Wladimir Klitschko for three world titles back in April 2014.

Looking to make a statement from the start, Parker, 27, bombarded Leapai with an assortment of thumping blows both upstairs and down. The fleshy Logan City veteran did well to make it through the first round, such was Parker’s punishing accuracy.

With his quick hands bamboozling Leapai, Parker was able to connect almost at will. Crunching uppercuts thudded off Leapai’s jaw as Parker nimbly bounced around on his toes. Well aware that he was totally in control, the Aucklander was able to take his foot off the gas somewhat as the fight progressed, although he still succeeded in scoring the stoppage. This came at 2-18 of the 10th (set for 12), when a right hook-left uppercut-right uppercut combination necessitated referee Ricky Gonzalez’s intervention.

Following his one-sided triumph in this battle between fighters of Samoan descent, Parker proposed the idea of a rematch with WBA, IBF and WBO boss Andy Ruiz Jnr, whom he defeated in December 2016 on a contentious majority decision.

“I’d fight Ruiz again,” Parker stated. “I know that he thinks he won that fight. Big-ups to him for winning his fight against Anthony Joshua [in early June], but if he wants to settle his score with me, I’d do it.”