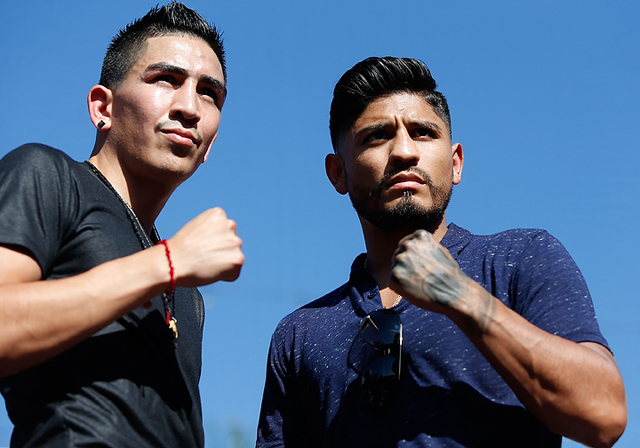 Fighters and trainers make their picks for Cruz-Mares

Julio Cesar Chavez Snr, Mexican Legend: Abner Mares W 12 – It’s a good fight that will end in a very close decision. If Abner Mares has the proper strategy, then he can make it. But Mares has to be in good condition, physically, and, mentally. If he is not, then Leo Santa Cruz can win.

Leo Santa Cruz has the virtue of throwing good combinations, but has the defect sometimes in that he is very mechanical. Abner’s virtue is very technical and he also throws good combinations. His defect is he cannot stand many punches.

Peter Quillin, former world champion, fights Michael Zerafa Sept. 12 on NBC: Leo Santa Cruz SD 12 Abner Mares – I honestly like them both. I like Leo Santa Cruz because he’s relentless with pressure and lots of punching. Mares is very strong and a good boxer. I think Santa Cruz wins by a split-decision in a really good fight

Paulie Malignaggi, former two-time champion: Abner Mares UD 12 Leo Santa Cruz- In a good fight, I’m picking Abner Mares. He seems a bit more versatile than Leo Santa Cruz and has been in with better opposition. That experience can help a lot when your opponent doesn’t have it.

Ronnie Shields, trainer of Erislandy Lara: Leo Santa Cruz UD 12 Abner Mares – It’s a good fight, but I like Leo Santa Cruz because he’s more of a boxer. Abner Mares is the bigger puncher, but Santa Cruz, the kid just fights to the level of his competition. I really like Santa Cruz and I think that he’s going to win a good fight by a close, unanimous decision.

Virgil Hunter, trainer of Andre Berto, Amir Khan: Abner Mares SD 12 Leo Santa Cruz – If Abner Mares boxes and uses his legs, he can present some problems to Santa Cruz, who sacrifices his height a lot. Being as tall as he is, he often squares up and fights too close.

That can play into Abner’s hands because he doesn’t have to worry about the reach. I would have to say this is a pick-em fight where it’s hard to give one fighter the edge. Abner can win, but he’s going to have to box. Leo can win with his volume punching. It’s just hard to pick a sure winner, but maybe Abner by a close split-decision.

Keith Thurman, welterweight champion: No pick – To be honest, I don’t have a pick. I’m just anticipating a good fight and a great performance between two great fighters.

I’ve seen both fighters fight but I can’t really break that one down. I like to be as accurate as I can be, and I don’t feel comfortable picking one over the other. It’s a great matchup this year, when boxing’s doing its thing.

Santa Cruz is going to have to keep Mares outside, because if Mares manages to get inside and he’s able to use his strength, then Santa Cruz will be in trouble. I think that it will be Mares by decision.

But I think that if I have to pick, I would go with Leo because his momentum has just been awesome and he doesn’t know what defeat is. They’re two strong fighters, even though Mares has that upset loss to Jhonny Gonzalez.

So they’re both really good fighters who are Mexican and when you have that, you’re always going to have a war. I don’t see a knockout, but I do see Santa Cruz winning by a split-decision.

Shawn Porter, former welterweight world champion: Leo Santa Cruz UD 12 Abner Mares – I give that fight to Leo Santa Cruz. I’ve known Leo for a very long time. We fought in the amateurs together and made some national trips together, so obviously that’s where my heart lies.

But I think that overall, he’s got the work output and all of the intangibles to go with it to beat Abner Mares. I think that most likely the edge in the punching power will most likely go with Mares. But Mares seems to step back and admire his work where Leo just continues to work.

Gary Russell Jnr, 126-pound world champion: No pick – Between Abner Mares and Leo Santa Cruz, I honestly just can’t pick a winner. I believe that Abner brings more to the table and that he’s more of a well-rounded fighter than Leo is, but I don’t know how Abner’s going to deal with Leo’s overwhelming pressure.

It’s going to be really interesting to see how Abner tries to offset that. In the end, it’s going to be a really exciting fight but it’s a coin-toss for me.

I would love for Abner to win, because he’s got a bigger fan base and I would love to fight him. Either way, I’d love to get the winner God-willing we get through our next fight.

If I had to choose between who I’d rather fight between Leo and Abner, it would be Abner based upon his fan base. But it’s too difficult to pick a winner.

I think Leo will be too strong and powerful for Mares. I’m picking Leo to win by knockout in the later rounds.

Kenny Porter, trainer & father of Shawn Porter: Leo Santa Cruz UD 12 Abner Mares- Right now I’m going to say Leo Santa Cruz. I look forward to that fight. Leo’s going to beat Abner Mares by a unanimous decision. I think that he will out-work him and out hustle him and out-box him.

Robert Guerrero, former welterweight world champion: Abner Mares SD 12 Leo Santa Cruz – This is a very tough fight to pick because both guys, when they are on top of their game, can beat anyone in their division.

With that being said, I’m leaning toward Abner Mares because I believe he’s got the better boxing skills. Leo Santa Cruz brings a lot of pressure and that could be troublesome for Abner. I’m picking Mares to win a close split decision.

This is a big fight for both men. Leo Santa Cruz is going to fight tooth and nail to keep that “0,” and Mares always brings it and will scrap till the finish. Should be a fun fight to watch.

Mickey Garcia, former champion: Leo Santa Cruz SD 12 Abner Mares – I actually think this fight is a toss-up. It all depends on which fighter can make the fight go their way. What I mean by that is Abner Mares is probably a more technical fighter and has more skills. He can box and he can punch and he can brawl if has to.

But for this fight, Mares has to use his skills and stay on the outside, use his jab and his right hand. That way, he can pull of a decision. On the other hand, Leo Santa Cruz is a come-forward volume puncher. If he can get that game plan going and keep Mares on the ropes and in the corners, he’s going to be scoring points and get the victory that way.

I think that Santa Cruz has shown a great chin and what you need to be a champion, and the other guy, Mares was knocked out by Jhonny Gonzalez, who is a good puncher. I think it will be a knockout in the seventh or eighth round.