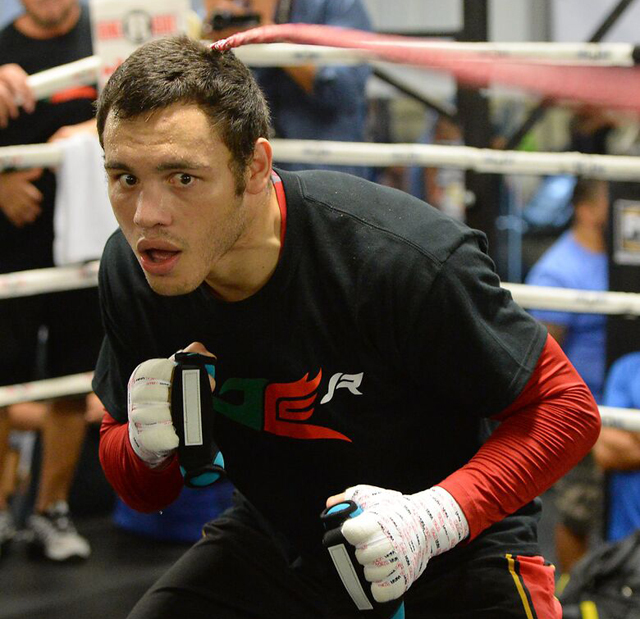 Chavez must get past Marcos Reyes next weekend though, writes George Gigney

The former middleweight world champion takes on Reyes over 10 rounds at super-middleweight, having lost his last fight to light-heavyweight contender Andrzej Fonfara in April.

While he is not overlooking his next opponent, the polarising Mexican is not sure at what weight his future lies but is eyeing the big names.

“I feel like I am in a good place right now. I am confident in my boxing ability because I know I am in the right condition.  I sparred 10 rounds yesterday, this never happened in my last fight,” he said.

“I must win this fight and then everyone will see that I am capable of fighting the big names like [Gennady] Golovkin and [Carl] Froch.

“I am currently training not just for my fight with [Marcos] Reyes, but also for a potential rematch with Fonfara.

“For this fight I will be at 168, but I am not sure what I will weigh for my fights in the future.  I’m ready for less than 168 to face opponents like Canelo [Alvarez].”

With a patched history with past trainers, including Freddie Roach, Chavez Jr has teamed up with Robert Garcia and his fight with Reyes will be their first together.

“I think Robert Garcia was the best option for me after my last fight.  He speaks Spanish and knows the Mexican style. He has trained a lot of champions and I have a good connection with him,” Chavez Jr said.

“I missed the basics of boxing training for the last fight.  Since I had such a long layoff, I needed to get back to the basics and I never did.”

Julio’s father, the legendary Julio Cesar Chavez Sr, revealed he never wanted his son to fight Fonfara, admitting that Jr is not big enough to fight at light-heavyweight.

“I didn’t want him to take the fight with Fonfara because he wasn’t at the same weight and he was coming off a year of inactivity,” he said.

“The loss to Fonfara didn’t take him down, it woke him up.  Now he must take a new path and win in a dominant fashion.

“I think that this is the right weight for Julio.  He is taking on a challenger who trains well and is young.  Julio has the essential qualities to step ahead and forge a new path.”

With Chavez Jr’s notorious reputation for sometimes under-preparing for fights, Garcia has been pleasantly surprised with the latest addition to his stable.

“Everything has come together so much easier than I expected.  Julio is training every day, he’s sparring.  He’s doing everything he has to do.  It’s been easier than I ever expected,” he said.

“Junior has his own style, and I’m not going to change that.  I’m just correcting little things; making sure he doesn’t have his head in front of his opponent and letting them hit him like they did his last couple of fights.  I want him to use the jab a little more and move side to side.”