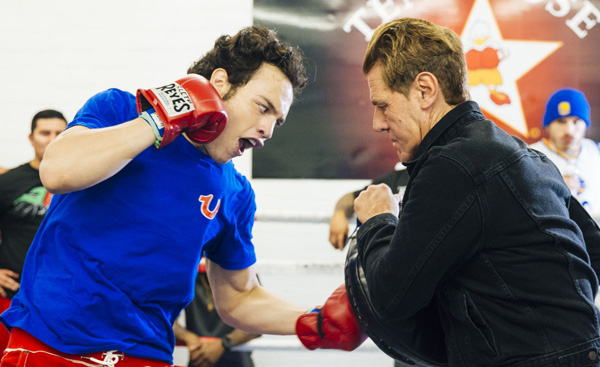 Chavez Jnr, his legendary father and new trainer discuss his preparations for the Andrzej Fonfara fight

In the 10-round co-feature, top 10 ranked junior welterweight contender Amir Imam (16-0, 14 KOs) will aim to move one step closer to a world title opportunity when he makes his second start of 2015 against fellow power-puncher Walter Castillo (25-2, 18 KOs).

Julio Cesar Chavez, arguably the greatest Mexican fighter of all time, made an appearance during his son’s workout to show his support and offer words of encouragement. Here’s what Chavez Jnr, Julio Cesar Chavez and Joe Goossen (trainer) had to say Friday at the Los Angeles-area gym:

“I am very focused going into this fight. I have changed a lot mentally this past year.

“I am fighting [Andrzej] Fonfara now because I like big opponents. I like the challenge of fighting good, hungry fighters. Just because Fonfara doesn’t have the name recognition of other fighters, it doesn’t make him an easy fighter. He’s tough.

“I feel comfortable at light heavyweight. Any time that you can add a couple pounds, you feel better. Although I will be fighting at 175, I feel most comfortable at 168 as a boxer. Since I have had one year off, it was a better choice to fight at this weight so that I could see how my body feels.

“Since I have added a few pounds, I have become a more physical and stronger boxer. The light heavyweight division has very big and physical contenders.

“Joe [Goossen] is a great trainer. He is a great motivator to his fighters and makes them better. I have worked very hard with him for the 35 days we spent together in Lake Tahoe.

“When I was training with Freddie Roach, it was very different. I think Freddie is a great trainer, but Joe also has a lot of experience and we have made a connection together.

“I really liked training in Lake Tahoe. The altitude, the ring, everything I needed was there. I felt very comfortable up there and I would like to come back there to train for a fight again.

“I promise a great fight, this is a very exciting fight. Fonfara isn’t an easy opponent, but he has never seen an opponent like me.”

“I am here to support and be with my son. I try to give him good advice. I tell him to train and prepare hard, and fortunately he is doing that well.

“I think Joe [Goossen] is doing a great job, we are on the same page. We are all focused on him [Chavez Jr.] getting to the fight well prepared. This fight requires great preparation because he is going into the fight at a weight that’s higher than his normal weight and he is facing a very tough opponent.

“I think there has been a 180 degree turn in his career. I see this as a positive because he can really develop his ability and looks very well prepared.

“I would’ve liked to have seen him take a tune up fight instead because of his long layoff; I particularly didn’t want this fight.

“Julio [Chavez Jnr.] wants credibility in this sport and that’s why he made the decision to take this fight, even though it’s a dangerous decision. He must be very prepared for this fight.”

“I’ve been asked over the years who the one fighter was that I would like to work and my answer was always Julio Cesar Chavez Jnr.

“I’ve always really admired his style. I had known him as a kid, his father is a legend. It had always seemed like a dream job for me, and out of nowhere I got it.

“Lake Tahoe was tremendous for training camp. You are isolated and it’s not an easy thing. When you aren’t training you are sitting in a hotel room. You are deprived the comforts of home, but it really gives you that concentration and dedication factor and I think that will interpret into some positive results.

“I matured over my years, once I had a kid and a family and I think the same has happened with Julio. Life becomes clearer when you put away the immaturity. You realize that you have a future and if you really want to access what’s available to you, then you are going to have to work hard and dedicate yourself to it.

“Going to Lake Tahoe and really working hard is a sign of maturity and I think that’s what Julio is going through right now. He really showed it by leaving his home and spending an extended period of time up there. To me that is a great indicator that he is mature, dedicated and taking this fight very seriously.

“Of course I believe Julio is ready to fight Fonfara. The fight was made before I even came on board, but that’s the challenge that I am presented with. You must figure out a good game plan and figure out what you’re up against.

“Just because Julio has been out a year doesn’t mean that it’s going to be a cake walk for Fonfara. We went up to Lake Tahoe with one thing in mind, and that’s winning this fight and that’s exactly what we’re going to do.”