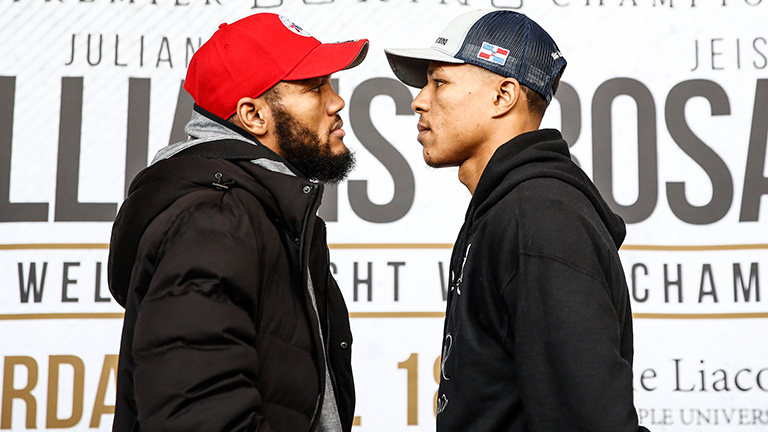 JULIAN WILLIAMS was involved in one of the best fights of last year. In May, the 29-year-old challenged the previously unbeaten Jarrett Hurd on away turf in Fairfax, Virginia, with the pair combining to produce a highly entertaining encounter. After 12 action-packed rounds, underdog Williams took a deserved unanimous points victory, as well as Hurd’s WBA and IBF super-welterweight straps.

A rematch between Williams and Hurd was pencilled in for late 2019, but the former titlist decided against going straight back in with his conqueror. With a sequel out of the running, Williams instead takes on Miami-based Dominican Jeison Rosario this Saturday (January 18). The site of “J Rock’s” opening title defence is the Liacouras Center in Philadelphia, meaning that he will be performing in his hometown for the first time in more than eight years. TGB Promotions stage the event, while BoxNation (UK) and FOX (US) televise.

“Seeing all the stuff that I saw growing up [in Philadelphia] made me hungry, made me want to get out and make a better life for myself,” Williams said. “All you have to do is walk outside and go down Lancaster Ave. If that doesn’t act as motivation for you then nothing will.”

Since drawing with the inconsistent Mark Anthony Hernandez in February 2018, Rosario, 19-1-1 (13), has strung together five decent wins on the spin, including a ninth-round stoppage of Hernandez in a return bout 11 months ago. The sole loss on the 24-year-old’s record came in April 2017 against the dangerous Nathaniel Gallimore, who floored him three times and stopped him in the sixth. A year later, Gallimore dropped a majority verdict to Williams.

Like Rosario, Williams, 27-1-1 (16) 1NC, has suffered just one reverse. That came via fifth-frame KO in December 2016 versus the undefeated Jermall Charlo. Williams was decked on three occasions during a hectic clash. He has improved markedly since this setback, as evidenced most clearly by his impressive showing against Hurd, whom he outworked and outsmarted with considerable skill and mettle.

Rosario is strong and can punch, but he lacks the experience and pedigree of his opponent. With Williams’ snapping jab, sharp uppercuts and spiteful hooks to head and body, expect the champion to retain his belts on a clear decision.

IN an applaudable move, Williams has declared that he will only defend his world titles against boxers who are willing to undertake at least 90 days of VADA (Voluntary Anti-Doping Association) testing prior to the contest.