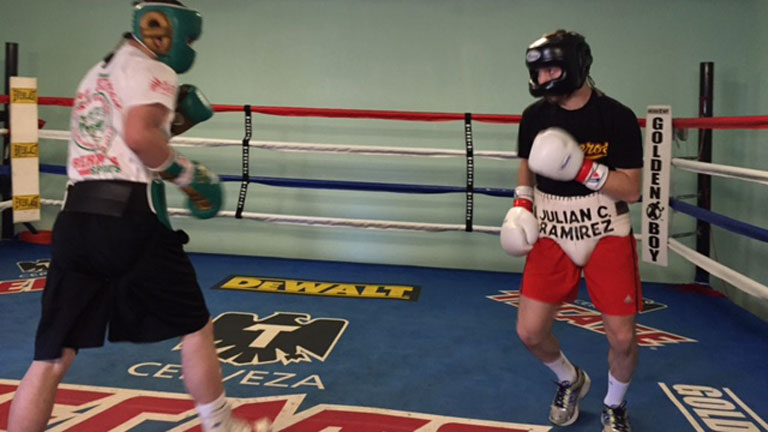 UNBEATEN Golden Boy featherweight prospect/contender Julian Ramirez is now 15-0 (8) and the southpaw from LA says he is closing in on a shot at a major title. The softly-spoken talent wants to be busier this year than he was in 2015 and his first start of 2016 takes place on January 29th, in a bout that will contest the WBC youth silver belt at featherweight.

Q: Are you fighting for the WBC youth silver title on January 29?

Julian Ramirez:  “Yes, I was supposed to fight a Mexican guy, but he got another promoter so I need another opponent now. [It has since been announced how Ramirez will face the 28-6-3(9) Christopher Martin.]

Q: All the same, are you excited to be having your first fight in 2016?

JR: “Definitely. I train every day, I even sparred over Christmas.”

Q: Looking at how your pro career has gone since your debut in February of 2012, are you happy with your progress?

J.R: “Yeah. I’ve had a couple of hand injuries but besides that I’ve got 15 fights in and I’m up there [in the rankings] getting closer to a title. I’m happy. This fight [on Jan. 29th] is for the silver title and a win will get me up there in the top-15 and then hopefully this year I’ll get a major title shot. Whoever is ready to give me one, I will fight.”

Q: You had two fights last year, did you want more?

J.R: “Yeah, I wanted to fight more. I could’ve boxed more but I’m not sure [why I didn’t get more fights]. This year, it will be perfect if I get four fights.”

Q: You have mostly boxed in California, yet you have fought in Mexico. Did you like fighting there and did the Mexican fans like you?

J.R: “Yes, I like it there and they liked me. It was cool. I’ve fought in Chicago and in Texas, all over really. I want to do that, it’s better for me. And I want to travel so why not do it with boxing. A boxing career is short and I want to do lots of travelling.”

Q: Do you still make featherweight okay, and will you stay at 126-pounds?

Q: We have a huge fight taking place over here in February at super-bantamweight, with one guy you know pretty well as you sparred with him – Scott Quigg. Who do you think wins, Quigg or Carl Frampton?

J.R: “I go for Scott Quigg. But that is a fight that could go either way. They are both good fighters and both are hard punchers. Quigg, I think is strong and smart. But he has to start fast I think, because Frampton is a quick starter. And Quigg has to make sure he doesn’t get caught cold early on or anything like that.”

Q: Would you take a fight at super-bantamweight, where you have boxed before of course, if a big, big fight at that weight was offered to you? Or do you envisage winning a world title as a featherweight?

J.R: “Oh yeah, I would. I could make the weight. Whether it’s at 122 or at 126, as long as I get a world title shot. I think I should be fighting at super-bantam, but they have me fighting at featherweight to get me the fights. I’ll fight any champion who is willing to give me a shot.”

Q: Who is the best in the world right now at super-bantamweight and at featherweight?

J.R: “[Vasyl] Lomachenko at featherweight and [Guillermo] Rigondeaux at super-bantam.”

Q: Are they both “dream fights” of yours?

J.R: “Oh yeah. Today, everybody is scared of fighting one another, of losing. I’m not one of those guys. I want to fight the best, to test myself. If those fights were offered to me I’d take them. I never want to retire wondering whether or not I could have beaten certain fighters. I want to leave it all [in the ring] in my career.”

J.R: “I’m getting stronger all the time. I can become a lot better.”